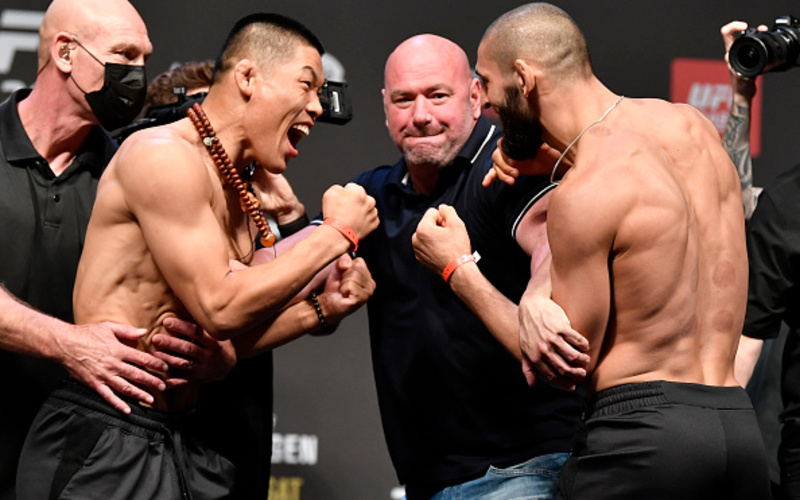 A stacked main card lineup of fights including two championship pairings is just around the corner, as well as our MMASucka staff picks.

UFC 267 is set for action in just a few short hours today, October 30 from the Etihad Arena on Yas Island in Abu Dhabi. This marks the promotion’s return to the United Arab Emirates after a successful string of three events in January of this year.

The main card will begin at an earlier start time of 2:00pm ET (7:00pm BST / 11:00am PT). For the first time in pay-per-view history, UFC 267 will be available without a charge to those with an ESPN+ subscription.

Find results from all of today’s UFC 267 fight card here at MMASucka.

Light heavyweights (205 lbs.) Jan Blachowicz and Glover Teixeira will take battle for gold in the main event of the day.

Current divisional champion Blachowicz has turned his career around following a dangerous 1-4 streak from 2015 to mid-2017. With only one defeat in his last ten professional appearances, as well as capturing the vacant title last year over Dominick Reyes, the Polish powerhouse is making the most at the incredible age of 38. Blachowicz will target his second defense tonight, his first coming by a five-round decision over middleweight king Israel Adesanya in March.

His opponent, Teixeira, adds an additional four years of age while competing at the top of his game. Two main event stoppages over Anthony Smith and Thiago Santos in 2020 have led the Brazilian to what will be his second promotional title shot. Can Teixeira find a sixth straight win and the UFC championship in his 21st walk to the octagon?

In the co-main event, former champion Petr Yan and top-talent Cory Sandhagen will duke it out for the bantamweight championship (135 lbs.).  Russia’s Yan had his dominant ten-fight win streak snapped and belt taken away due to a controversial disqualification in his March fight with Aljamain Sterling. Well-rounded Sandhagen looks to rebound in the victory column after falling short in a back-and-forth affair with the returned T.J. Dillashaw in July.

See who the MMASucka staff are picking to win at UFC 267 further below.

The WINNER of staff picks in 2021 will have a choice between receiving a custom-made championship belt from ProAmBelts or a chain from Championship Chains. For the third straight year, Michael DeSantis captured the 2020 victory compiling a record of 201-88.

See below for our main card picks at UFC 267: Blachowicz vs. Teixeira.