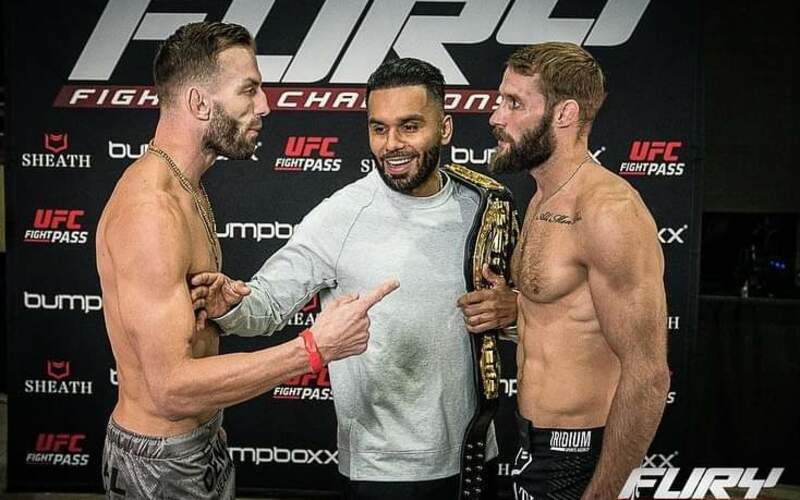 Fury FC returns to Colorado for the second time this year as it hosts Fury FC 53 at the Western National Complex in Denver, Colorado. MMASucka has you covered with live results for this card and many more.

Headlining the 19-fight card is a battle between JJ Okanovich (8-2) and Trey Ogden (14-4) for the Fury FC lightweight strap. Bellator and Dana White’s Contender Series veteran Okanovich returns to the Fury FC cage after a victory just two months ago at Fury FC 50. Doing his training at the world class American Kickboxing Academy, it is obvious the California resident brings a strong ground game. In his eight pro wins, he’s earned four submission victories and been dominant in a few others. With that being said, don’t sleep on the 31-year-old’s standup as it has come a long way.

Ogden will be the man standing across from Okanovich when that cage door closes tonight. The 32-year-old has been quite hot as of late winning back-to-back bouts and securing wins in three of his last four. After a host of cancellations, the Glory MMA member will make his first walk in 2021 at Fury FC 53. Ogden has a decent resume having shared the cage with the likes of TJ Brown, Thomas Gifford and Nick Browne. In this headliner the stakes are high as several UFC representatives will be cageside, not to mention Fury FC gold is on the line.

In the co-main event, undefeated bantamweight Mo Miller (6-0) takes on former Fury FC title challenger Jose Johnson (12-7). After a dominant win on Week 3 of Dana White’s Contender Series this year Strong Style’s Mo Miller was not awarded a UFC contract. However, he was put on the UFC’s shortlist. The insanely high-level wrestling portrayed by Miller is something that gives all his opponents serious issues. In his pro career, four of his six wins have come by way of finish. Also, the 29-year-old has yet to lose a pro or amateur MMA bout in his career’s entirety.

Jose Johnson looks to spoil the Mo Show later this evening. Johnson is a guy who never says no to a fight. He’s shared the cage with Mana Martinez, Ronnie Lawrence and Levi Mowles, not to mention his Dana White’s Contender Series veteran status as well. In the 26-year-old’s 12 pro wins, he has earned eight finishes, with six being knockouts. With that being said, it will be in his best interest to keep this one standing, although that is easier said than done against Mo Miller.