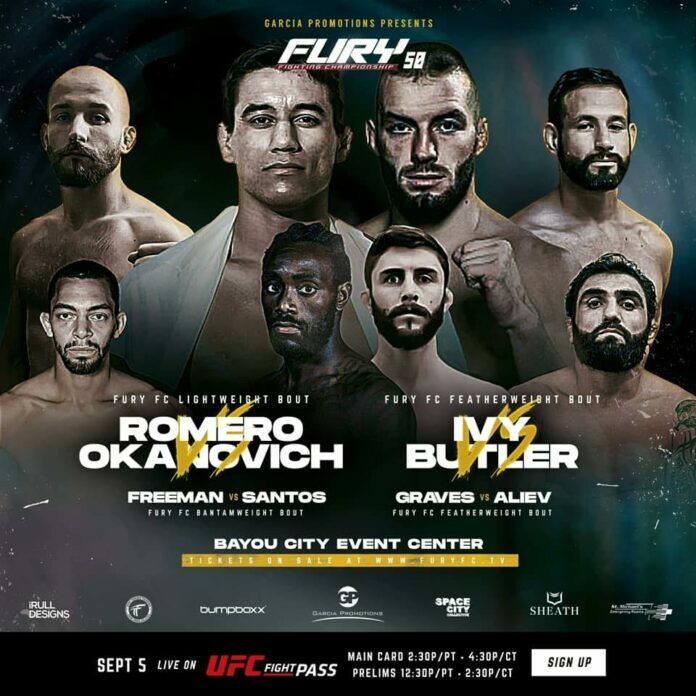 Fury FC 50 will be taking place this Sunday, September 5th at the Bayou City Event Center in Houston, Texas. The main event of the evening will be undefeated, Anthony Romero taking on Bellator alum, JJ Okaovich. Eight amateur fights will take place at Fury FC 50 while 10 of the fights on the card will be professional bouts. The prelims will be starting at 3:30 pm ET and the main event will start at 5:30 pm ET.

Anthony Romero has six of his nine wins by decision. He has fought for KOTC and LFA prior to his fight this weekend as well as winning a decision over Mike Breeden on Dana White’s Contender Series in 2020. Romero’s opponents so far have a combined record of 43-14. He won his most recent fight by split decision victory in December over Zach Juusola.

Okanovich has four submission wins and has yet to win a professional fight by knockout. He lost his professional debut to Danny Ramirez by knockout and his only other loss was a decision loss to Lucas Clay in his most recent fight back in January. Okanovich has a Contender Series win over Christian Lohsen in 2019. His opponents combined records come out to 24-6. Both men have fought in front of Dana White and hope that with a win this Sunday, they will get another shot to fight in the UFC.

The co-main event of the night will be a bantamweight fight between Cody Freeman and Carlos Vera. Cody Freeman has a professional MMA record of 7-3 and has finished four of those seven wins by submission. He has two decision and one submission loss to Peter Caballero in his third professional fight. Freeman is currently on a two-fight win streak winning submissions over Colin Wright and Jonathan Eiland. He is the current American Kombat Alliance bantamweight champion.

Carlos Vera has a professional MMA record of 8-3 with two of his three losses being by submission. Vera is 1-2 in his last three fights and has not fought since being submitted by Levi Mowles in January of 2020. Vera will come into this fight with a significant size disadvantage. He will need to implement a good game plan if he wants to fight his way to a decision at Fury FC 50.

Cameron Graves will be taking on Huseyn Aliev this weekend at Fury FC 50. In Graves’ last fight he lost his Fury FC featherweight title to Fernando Padilla. Six of Graves’ nine wins come by knockout and three of his four losses are also by knockout. Graves has a great grappling game but is also a very dominant striker. He will be taking on Huseyn Aliev who will be making his Fury FC debut on Sunday. He is 0-2-1 in his last three fights. His most recent fight was a loss to Dimitre Ivy following a three-year layoff from 2018-2021. Aliev has never been knocked out but he was submitted in three of his four losses.