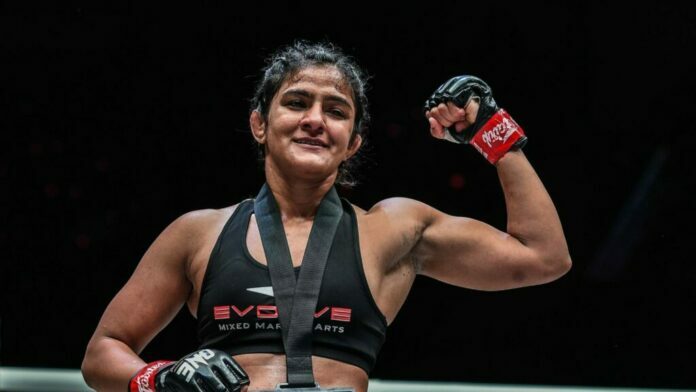 ONE: Empower, on Friday, September 3, was ONE Championship’s return to all-live events. The important date was marked by an incredible night of action in eight women’s martial arts contests.

3 Things We Learned at ONE: Empower

At the top of the bill, “The Panda” Xiong Jing Nan defended the ONE Strawweight World Championship against Michelle Nicolini in a five-round battle. Xiong avoided the ground and used her superior striking to dominate.

ONE Super Series standouts Jackie Buntan and Anissa Meksen thrilled audiences as well in their two victories, but the spotlight was on the ONE Atomweight World Grand Prix.

After a stunning evening of martial arts, here are three things we learned from ONE: Empower.

Ritu Phogat Grew Up During Intense Battle With Meng Bo

Ritu “The Indian Tigress” Phogat decided against an Olympic run to do mixed martial arts. She chose Evolve MMA to hone her skills, and she has incrementally showcased her development in each of her matches.

However, at ONE: Empower, she grew up and is now a true contender.

Phogat still is putting in work with her hands, but more important than any skill is heart. She has it. After getting rocked and nearly finished in the first round, Phogat rebounded to close the round in top position. She then took over the match and won the remainder of the battle to take down the #2-ranked contender in Meng Bo.

That performance showed championship character, and it elevated her from prospect to contender. This battle will be one of the career highlights for Phogat no matter where she goes from here. It was the performance she needed to mature into the next phase of her career.

Stamp Fairtex Is A Problem

A former two-sport World Champion in kickboxing and Muay Thai, Stamp Fairtex was a known issue on the feet. The script to defeat her was always to take her down and remove that part of her game. But after ONE: Empower, she is becoming a threat on the ground.

Against Alyona Rassohyna, a noted grappler, Stamp nearly finished the bout with a rear-naked choke. More importantly, as it pertains to her future, Stamp was strong in her all-around grappling defenses.

Does she still have room to improve? Of course. However, Stamp is showing she is not afraid of the ground and can threaten even a more experienced grappler once on the canvas.

The Thai’s performance should send a message to everybody in the division that they need to reevaluate how they want to approach a future meeting against her. Stamp is for real, and now two wins away from a title shot.

South Korean legend Seo Hee Ham made her ONE debut, and she was greeted by #1-ranked atomweight contender Denice Zamboanga. It was a tall order for the veteran, but after three close rounds, she got the nod from the judges.

It was an important victory for Ham. Not because it was against the division’s top contender, but because it was a significant test to overcome past issues en route to a World Championship. Zamboanga tried to stifle the South Korean with pressure and clinching, but Ham was able to avoid damage and escape repeatedly.

The win helps to show that she has learned to overcome those difficult positions.

With two more strong grapplers advancing, Hirata and Phogat, those are skills she will need to keep sharp. Ham’s missing piece of her legacy is a step closer to reality, and the talented South Korean made sure everybody knew she was ready for the global stage and the grapplers within the division.