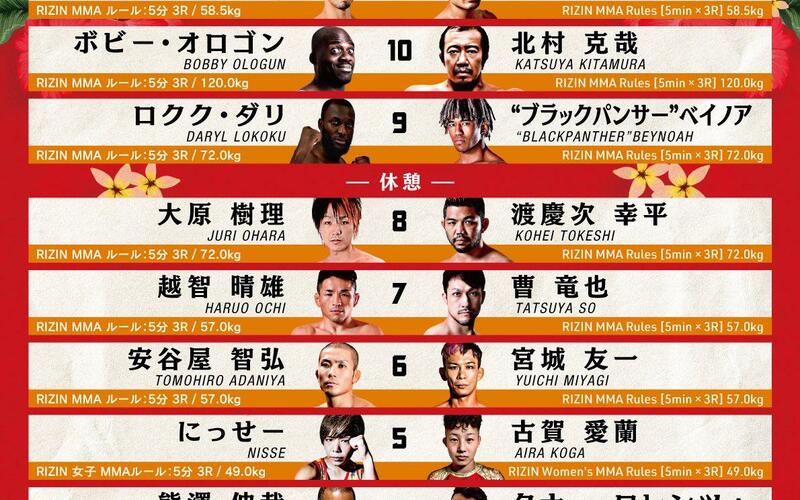 Rizin 32 is looking like it’s going to be one circus of a show. Other than the main event, the other fights range from a freak show affair, MMA fighters in kickboxing rules, and some severe mismatches on paper. But that is what makes this card stand out. It looks like it’s going to be a fun, entertaining as hell show from the Okinawa Arena. We will look at five of the unique fights from this card and tell you why you should be excited about them. 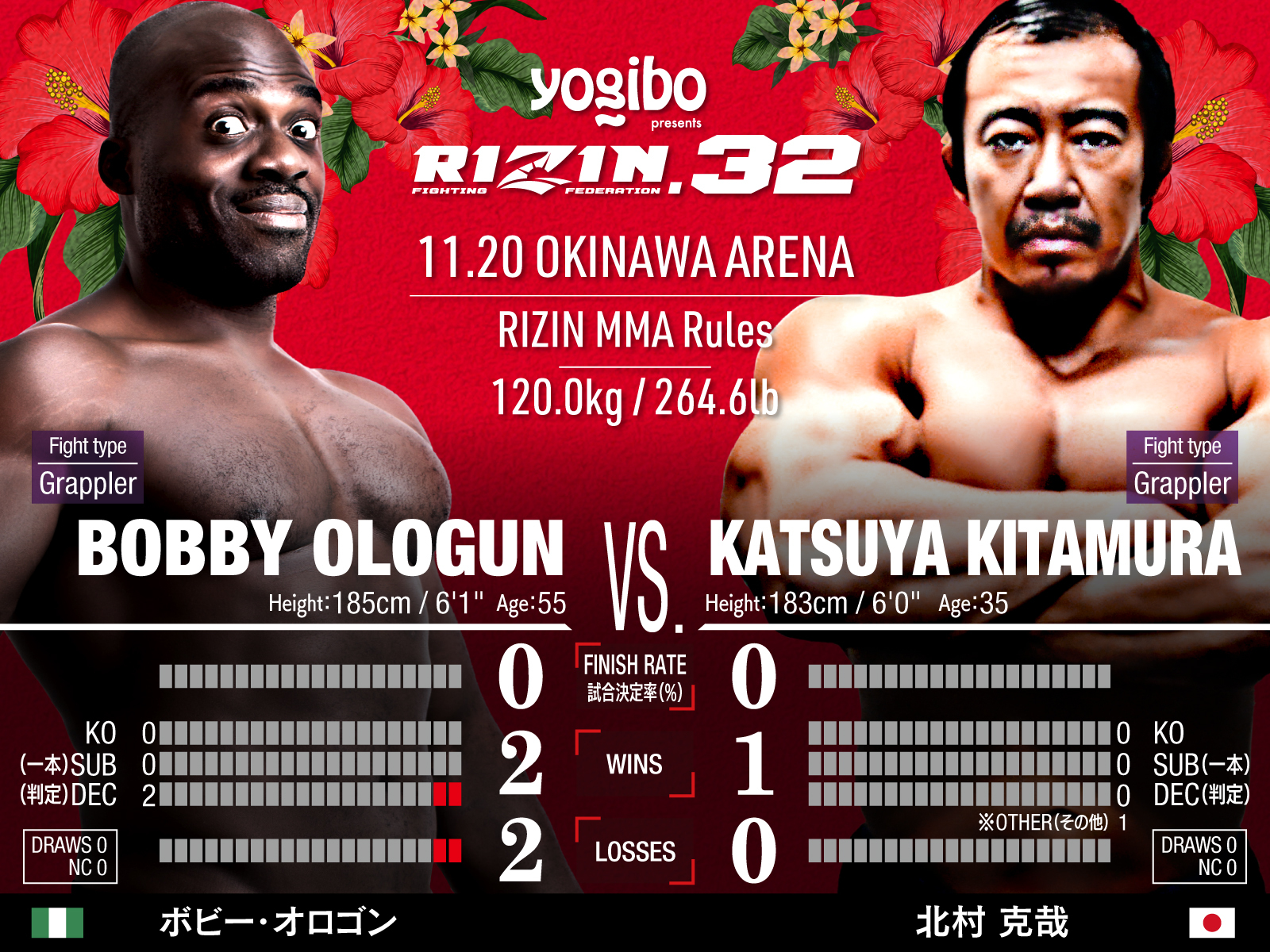 This is without a doubt Rizin 32’s most unique fight. Photo courtesy of Rizin FF.

Bobby Ologun (2-2) is a Nigerian-born comedian and TV personality whose gimmick is that he mispronounces Japanese words and statements. Ironically enough he speaks fluent Japanese. His celebrity status took a hit when allegations of assault and domestic violence were levied against him. He has also falsified his age on documents. Barring all that he does have legitimate fight experience even if his last fight was in 2006 and with a loss to Bob Sapp. Ologun does have a win over Akebono. Whether he takes this fight seriously or not is unknown. During the Rizin 32 press conference, he seemingly was in comedy mode when he made his comments. “I just found out who my opponent is. This guy is huge. Gagakibara got me a crazy opponent,” he said deliberately mispronouncing CEO Nobuyuki Sakakibara’s name. “When I fought bigger guys back in the day I had no idea what I was getting into. But hey, let’s see who’s got fake muscles in this fight.”

Katsuya Kitamura will be making his pro-MMA debut in this fight. He is mostly known to pro wrestling fans when he was a part of the New Japan Pro Wrestling dojo. He wrestled a number of matches for the promotion before leaving in 2019. He then resurfaced doing bodybuilding competitions, a Ganryujima moat fight which he won, and an exhibition kickboxing match against K1 fighter Rukiya Anpo. He has popped up numerous times on Rizin Confessions videos as the weight trainer for super atomweight champion Ayaka Hamasaki. He said of his fight “I will not take [Ologun] lightly and show you a heavyweight fight.”

I have no idea what to put in words for how this fight will go. This will NOT be a technical classic. I’m expecting a sloppy, theatrical exhibition with lots of heavy breathing if it goes past the first round. On paper Ologun should seemingly have the win based on experience alone. But I have no idea if Ologun was regularly training after his fights from over a decade ago. Kitamura has been hanging out with Hamasaki and other members of the AACC dojo so they must be teaching him some sort of ground grappling and judo. 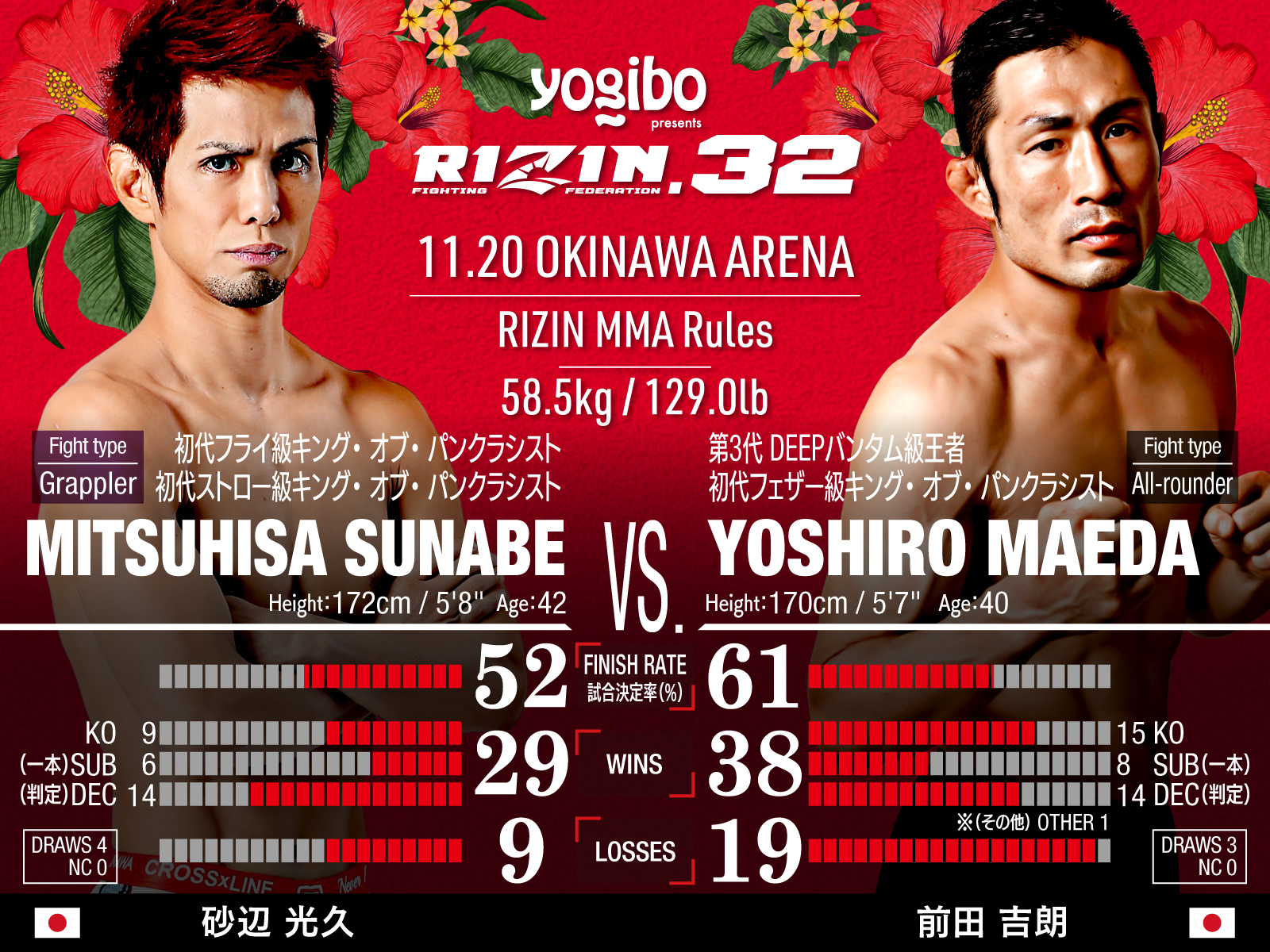 Mitsuhisa Sunabe is making his return to Rizin after a two-year fighting layoff. The Okinawan native is a former Pancrase flyweight and strawweight champion. At one point he had on the longest winning streaks in JMMA but Haruo Ochi stopped that streak at Rizin 13. Sunabe will be looking to get his first win at Rizin 32 in front of his hometown. Sunabe stated at a press conference “I made my professional debut 20 years ago. I fought Pancrase fights in Okinawa and won 3 belts in the organization. I am here to finish off my accomplishments of fighting in the biggest organization in Japan, here in Okinawa.”

Yoshiro Maeda is a longtime under-the-radar fighter. He is a former Deep bantamweight and Pancrase featherweight champion. His most notable fight to date is when he challenged then WEC champion bantamweight Miguel Torres in one of the best fights of that year. He also has wins over Haruo Ochi, Masenori Kanehara, and Klebr Koike. He is an incredibly well-rounded fighter who is adept at striking or working on the ground. He said “Sunabe and I fought when we first started, which was about 20 years ago, and now fighting him again after all these years makes me very excited. This fight will be a grand sum of my career. I will beat Sunabe and return to Osaka with a smile.”

This fight has so many layers. These two fought back on May 18, 2003, at featherweight. Maeda beat Sunabe by unanimous decision. It was also Sunabe’s first professional loss. They are both on a two-fight losing streak. They are former champions of their home promotions and have wins over top talent in Japan. Their careers have gone drastically different routes. Maeda got to fight internationally while Sunabe has stayed in Japan his entire career.

Sunabe is the type of fighter that grinds out his wins. His excellent cardio and stamina make him a hard guy to tire out. He can fight at any pace and usually is the guy who dictates that pace for the fight.

Maeda is also a well-rounded fighter and is great at all aspects of the game. He’s got a little more knockout power than Sunabe. He’s more likely to knock out Sunabe than vice versa.

This is such a hard fight to predict. Both fighters have evolved since they first met. I expect this to be a technical MMA masterpiece. 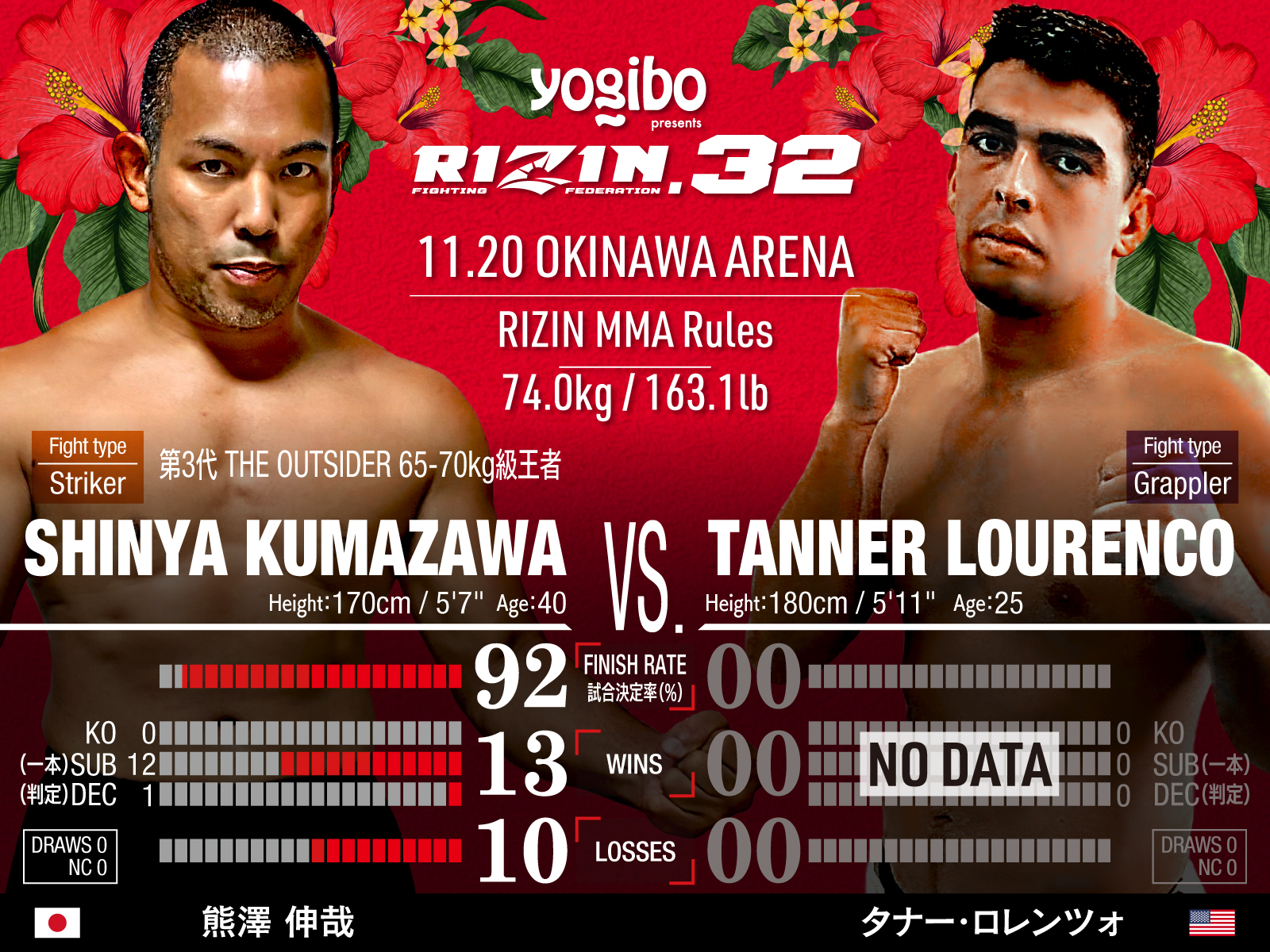 Shinya Kumazawa (13-10) is a journeyman fighter. He wins some and loses some. But don’t think his record is anything to scoff at. He has finished all but one of his fights. Those wins are all by submission and a number of them are by heel hook. He is a fighter with years of experience and one who you want to try to run away from as soon as he grabs your leg.

Tanner Lourenco is making his debut on the very big stage with this fight. An active lance corporal in the marines, he is a purple belt in BJJ under Renato Sobral aka Babalu.

Kumazawa on paper seemingly has the advantage in this fight given his fight experience and his ability to finish opponents by submission. However, Kumazawa has had a six-year layoff. He has no tape to study on Lourenco so his best bet to win is to go in hard with strikes and secure a submission win. But Kumazawa better be aware of the soccer kicks!

Lourenco has an advantage in that there is no idea how he will fight. Will he strike mainly? Grapple? Mix it up? Lourenco will have to be careful and not play into Kumazawa’s game or it could be a short night and broken foot going back to base. Lourenco will have to keep Kumazawa guessing and mix up the aspects of MMA as much as he can to get a win against a veteran like Kumazawa. 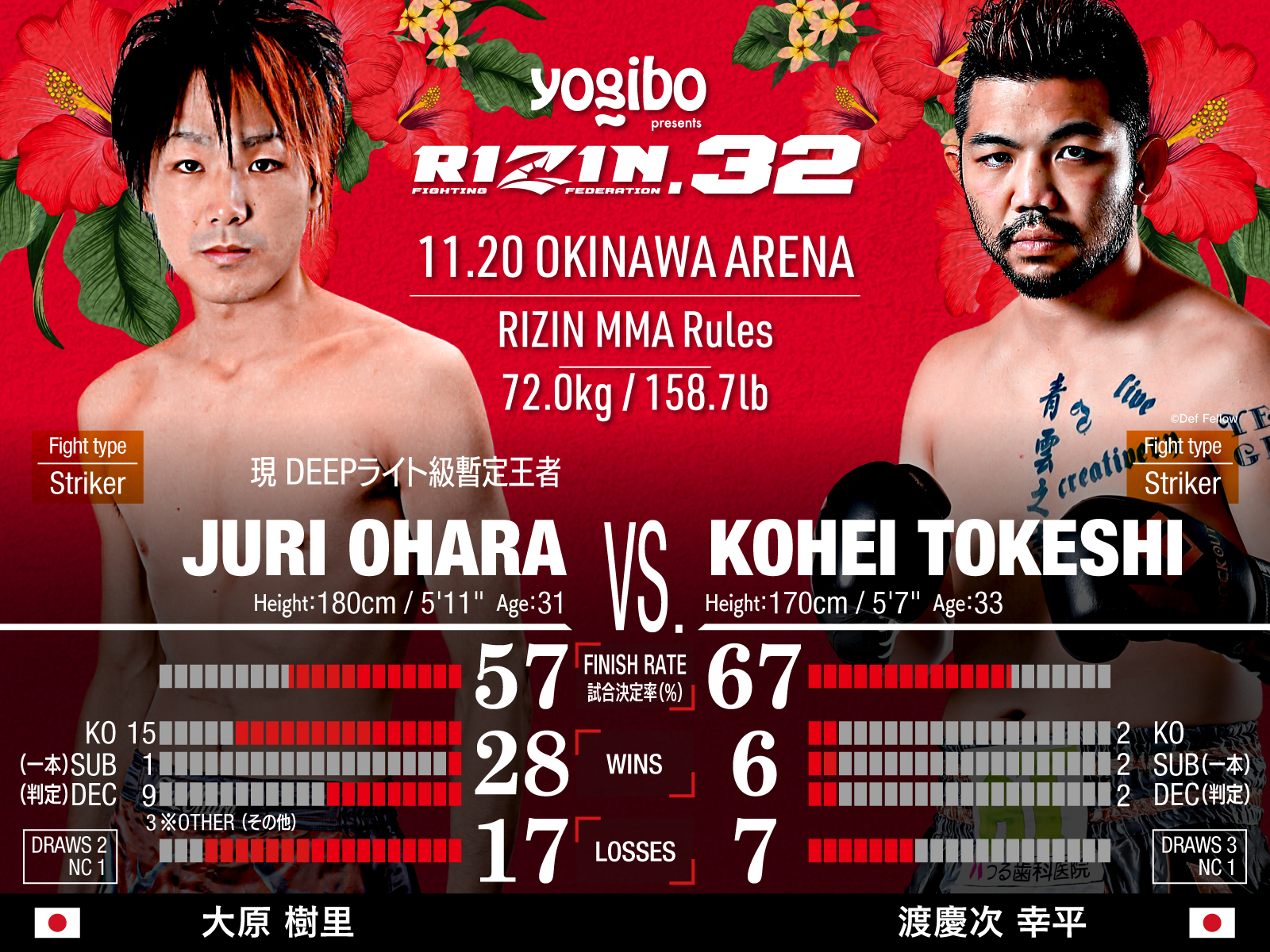 This fight looks like it will be a violent affair. Photo courtesy of Rizin FF.

Juri Ohara (28-17-3, 1 NC) made a huge impact in his awesome Rizin debut at Rizin 24 when he took Yusuke Yachi to the limit. Ohara also wins over Daryl Lokoku and Satoru Kitaoka. Ohara is a vicious striker having finished 15 of his fights by TKO. Expect to see him come out fast and brazen as soon as the bell rings. Ohara said “I’ve won some fights after my win against Yachi and I do believe I have earned myself another shot in Rizin. I promise to put on a fight the fans want to see.”

Kohei Tokeshi (6-7) is a fighter’s fighter. He’s fought in MMA rules, kickboxing, Muay Thai rules, and most recently in Lethwei (think of it as kickboxing but headbutts are allowed also). This is his debut in the Rizin ring so hopefully, he remembers that headbutts are illegal, but soccer kicks are not! He said “I grew up here in Okinawa in a not so good neighborhood, moved to Tokyo and I’m back again because Rizin is here. I think I’m the only one who can show a wild fight on this card.”

I expect both fighters to come out striking hard and fast as soon as the first starts. Ohara’s striking will be a lot more crisp and technical. Tokeshi’s is going to be wild and powerful. The question who hits the button on the temple or the chin and sends their opponent to the canvas. Don’t expect any grappling, wrestling, or lay and pray. This is a fight that’s going to be decided on the feet.

Haruo Ochi vs Tatsuya So 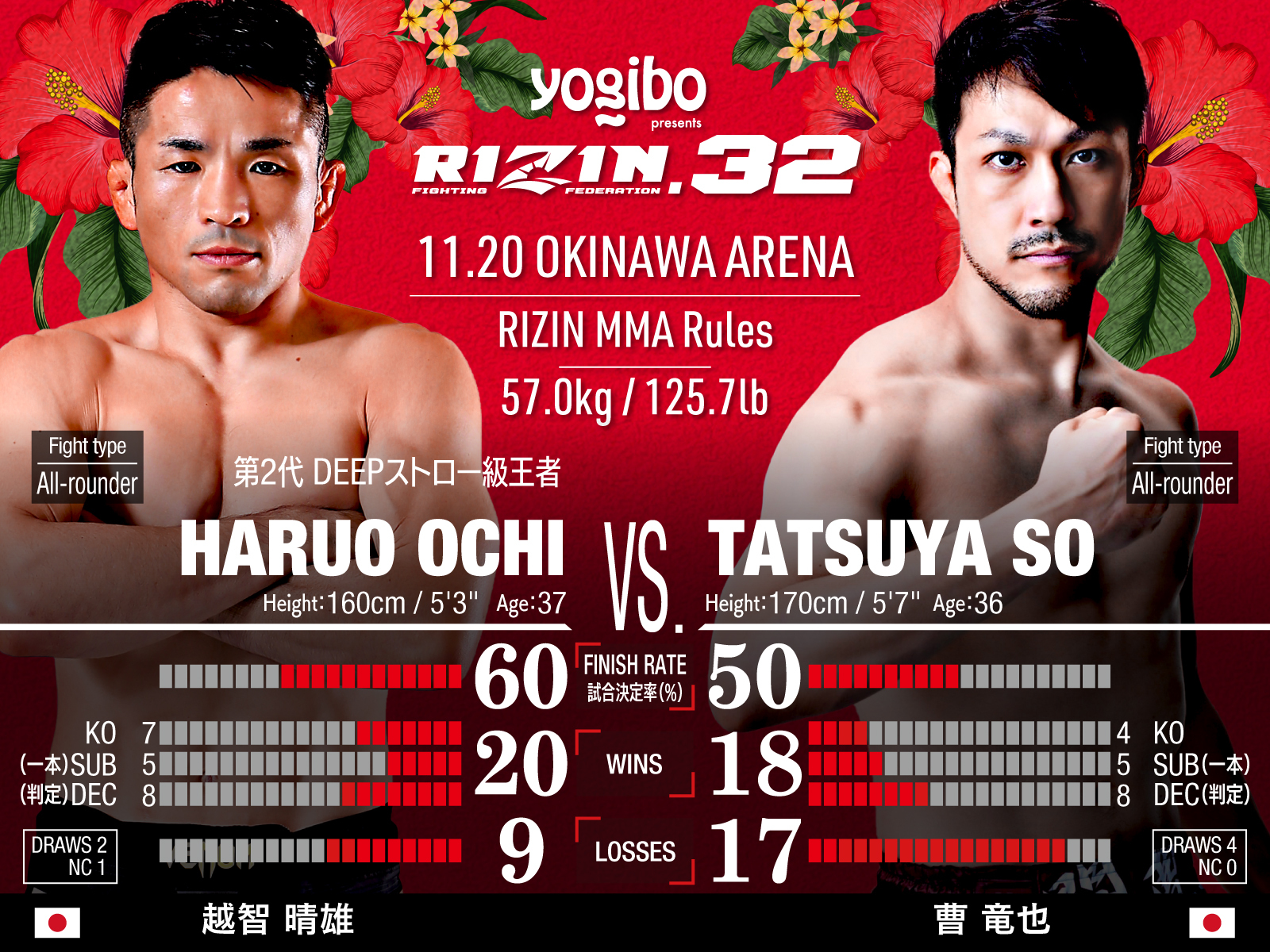 Haruo Ochi will look to get a second win in Rizin while Tetsuya So looks to return with a big win. Photo courtesy of Rizin FF.

Haruo Ochi at one point was the number 1 or 2 strawweight depending on who you talked to. He’s a physically powerful fighter who can knock you out (he has a brutal soccer kick KO over Mitsuhisa Sunabe at Rizin 13), choke you out with a tight guillotine, or wrestle you for three straight rounds. He has unlimited cardio and will hardly break a sweat. Ochi said, “I know I am fighting a local fighter so this will be an away environment but I plan to disappoint everybody who is there to cheer for my opponent.”

Tatsuya So is a veteran of the game fighting since 2006. He hasn’t fought since 2019 but is going to look to come in with a big win. He is a good striker but also has a sneaky good submission game. He has made most of his career in Pancrase and will fight in front of the biggest crowd of his career. He’s already predicting an outcome for the fight and his plans after. “I plan to soccerball kick Ochi in the face and call
out Sunabe, who has been dodging me for 7 years.”

Haruo Ochi is likely to come in and drag the fight to the distance. He is going to push the pace and force So to fight at an exhausting level. If So hasn’t prepared physically to go three rounds he is going to have a tough fight ahead of him. The longer it goes the more it favors Ochi.

For So, he’s going to have defend against any grappling that Ochi tries to initiate. Keep him reeling back with strikes and then reset backwards to maintain distance. Being the taller fighter he’s going to need to use that reach to keep Ochi at bay.

You can catch Rizin 32 live Friday, November 19 at 9 pm EST on Live-Now with English commentary. You can catch the show here.