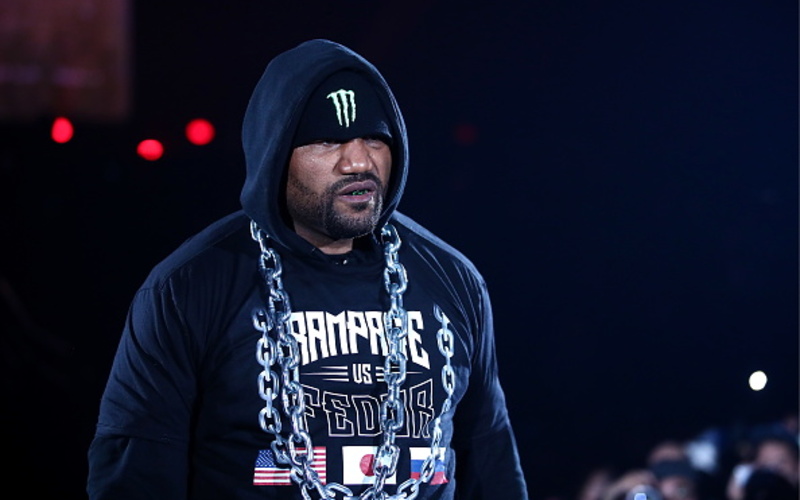 It appears that former UFC Light Heavyweight champion and Pride FC Champion Quinton Jackson is all done with the MMA side of his combat sports career.

“Rampage” has always been one to prefer the boxing aspect of MMA, and it seems that is the only aspect he wants to do anymore. At the Triller Triad Combat press conference, Jackson discussed his lack of motivation with MMA by saying that “I have been fighting MMA for so long and I’ve been fighting the best people in the sport…I win some and I lose some, but that thrill is not there anymore in MMA like when I started.”

“Rampage” has developed a grudge of sorts with former WBO Heavyweight Champion Shannon Briggs under the Triller promotion, whether it’s in boxing or Triad Combat. Triad Combat will be having its first event on November 27th, with notable boxing and MMA matchups such as Frank Mir versus Kubrat Pulev and Mike Perry versus Michael Seals, so this would be right in their wheelhouse.

Quinton Jackson did say, though, that this is the exact thing he needs to get the competitive juices flowing again. He said “…stepping into a boxing ring with someone of the caliber of Shannon, I’ll have that rush… If I don’t get this right, I can get knocked out and that’s what I need…”

The lack of motivation has been what has really put a damper on “Rampage” on what we now know is the tail-end of his career. The shape with which he came into the Fedor Emelianenko fight was sad compared to what fans saw later in his UFC career, especially during his last title run that Jon Jones stopped, and early in his Bellator career.

Ironically, it was the Fedor fight mentioned above that brought he and Briggs together to make this fight a strong possibility. According to Jackson, the initial arguments and disrespect started there: “…I’m going to keep it real. It’s embarrassing for me that I lost my last fight the way I did and Shannon was very disrespectful. Before I can even get to the locker room, I got a text on my phone saying, ‘I’ll fight you, I’ll fight you in boxing.”

At the current situation, both men seem to be stonewalling the other and with no bout agreement in place, fans have to wait for this weekend, and maybe during Triller’s event Saturday they will get to see something materialize.