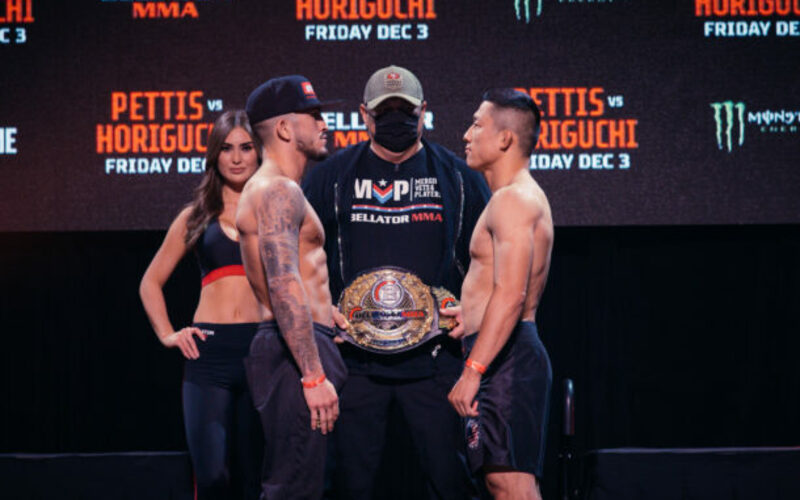 Bellator 272 will be Bellator’s last show of the year and it is a big one. This event will be broadcast from the Mohegan Sun Arena in Uncasville, Connecticut. It will be happening on Friday, December 3rd with preliminary fights starting at 7 pm EST/4 pm PST on Bellator’s Youtube channel and the main card on Showtime at 10 pm EST/7 pm PST. MMA Sucka has fight fans covered with the event’s results.

In the main event for Bellator 272, bantamweight champion Sergio Pettis (21-5) will take on Rizin bantamweight champion Kyoji Horiguchi (29-3). Horiguchi vacated the Bellator title in November 2019 due to an injury. Pettis won the title from Juan Archuleta, who beat Patchy Mix fox the vacant title. Horiguchi sees himself as still the champion as he was not beaten for the title, while Pettis wants to cement his legacy as not just a transitional champion. We talked to both fighters during the Bellator 272 media scrums:

The co-main event will feature two featherweights looking to get back on the winning column. The #4 ranked Bellator featherweight Emmanuel Sanchez (20-6) will be taking on #9 ranked Jeremy Kennedy (16-3). Both fighters are coming off tough losses, as Sanchez has lost to Patricio Pitbull and Mads Burnell, while Kennedy lost to Adam Borics in his last fight. Expect these two to put on a great fight.

Other notable fights include Josh Hill (20-4) taking on Jared Scoggins (10-1) in his Bellator debut. Scoggins had his three previous attempts at a Bellator debut fall through. Opening the prelims will be a clash at 170 with Oklahoma State University wrestler Kyle Crutchmer (7-1) taking on Karate-based fighter Oliver Enkamp (10-2).

Sergio Pettis (c) def. Kyoji Horiguchi via KO (spinning backfist) at 3:24 of Round 4 to retain the Bellator Bantamweight Championship
Jeremy Kennedy def. Emmanuel Sanchez via unanimous decision (30-27, 30-27, 30-27)
Josh Hill def. Jared Scoggins via knockout (punch) at 0:56 at Round 2
Johnny Eblen def. Collin Huckbody via TKO (punches) at 1:11 of Round 1