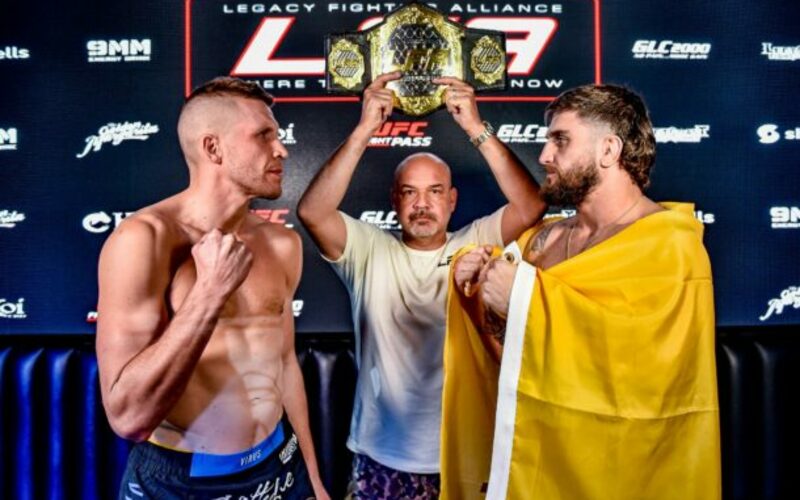 LFA returns to Phoenix, Arizona for the first time in nearly two and a half years to host LFA 119 at the Arizona Federal Theater. MMA Sucka will be covering LFA 119 live right here as well as many other cards this weekend.

In the main event, LFA light heavyweight champion Josh Silveira (6-0) seeks double champ status as he takes on Jared Revel (11-2) for the LFA middleweight championship. American Top Team’s Silveira is the son of UFC veteran and American Top Team co-founder Conan Silveira and is one of the brightest prospects on the regional scene. Although this is his middleweight debut, he made weight with ease and is as prepared as ever. The former Arizona State wrestler fights professionally in the state he competed at the collegiate level for the first time in his career. Silveira has been nothing short of dominant in his six pro bouts, as he has stopped all, but one of his opponents by first-round finish. In his last bout, he earned the LFA middleweight strap after landing a picture-perfect head kick 49 seconds into LFA 115’s headliner.

Despite the quality of the 28-year-old’s game, it’s no secret Jared Revel is most likely his toughest test to date. Canada’s Revel returns to the cage tonight after over a year out of competition. This will also be his American debut. The 37-year-old does his training at Revolution Martial Arts and Fitness and is a Brazilian Jiu-Jitsu black belt. Revel has won six straight and 11 of his last 12 bouts. In those six straight wins, four have come by finish and three have ended in the first round. Revel hasn’t tasted defeat since 2017 and seeks to spoil Silveira’s return to Arizona. Overall, this will be quite the high-level martial arts battle with LFA gold on the line.

In the co-headliner, someone’s “0” has to go as Richard Palencia (9-0) squares off with Allan Begosso (6-0-1) to determine the next LFA bantamweight champion. Palencia is the hometown hero hailing from Phoenix and training out of the MMA Lab. The 31-year-old is beyond a tenured veteran who made his pro debut back in 2013. After over a two-year layoff, he returned to the cage in January at LFA 98 in dominant fashion earning a convincing decision win. Palencia is set to make his fourth walk to the LFA cage after making his promotional debut in 2017.

Twenty-six-year-old Allan Begosso has had a relatively similar career path as his counterpart. He made his pro debut in 2014 as a 19-year-old. Following a pretty dominant five-fight start to his career, he took three years off after 2017. Just over a year ago, he returned to the cage and made his promotional debut for LFA. In his two bouts with the promotion, he’s made quite the name for himself, finishing both his opponents in the first round. Begosso does his training at the world-renowned Team Alpha Male and gets work in with some of the best lighter-weight fighters on the planet. This will be quite the technical war to determine the top bantamweight on the LFA roster.