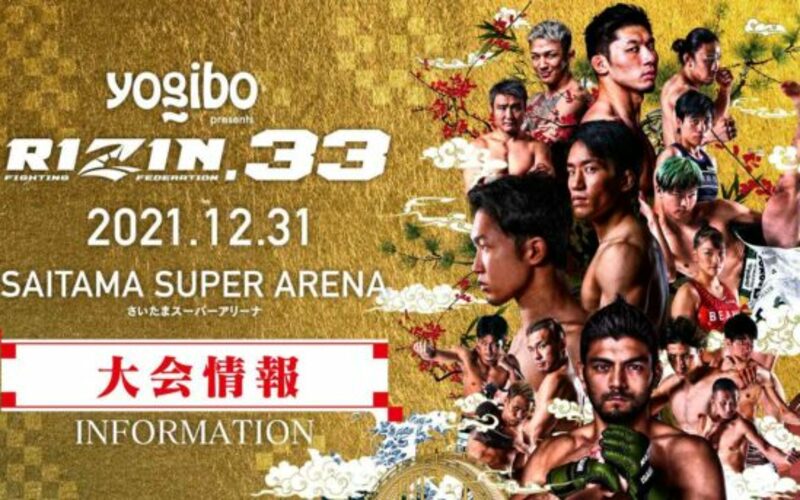 Contrary to popular belief, combat sports in 2021 are not finished yet, as Rizin’s yearly New Year’s Eve show is happening tonight. The last major combat sports show of the year, Rizin 33, will go down live from the Saitama Super Arena. The show will feature MMA, the semifinals and finals of the Bantamweight Grand Prix, kickboxing, boxing, custom rules, and much more. Apart from some incredible fights, fans can expect pageantry with grand entrances, booming introductions by the great Lenne Hardt, and possibly other surprises. 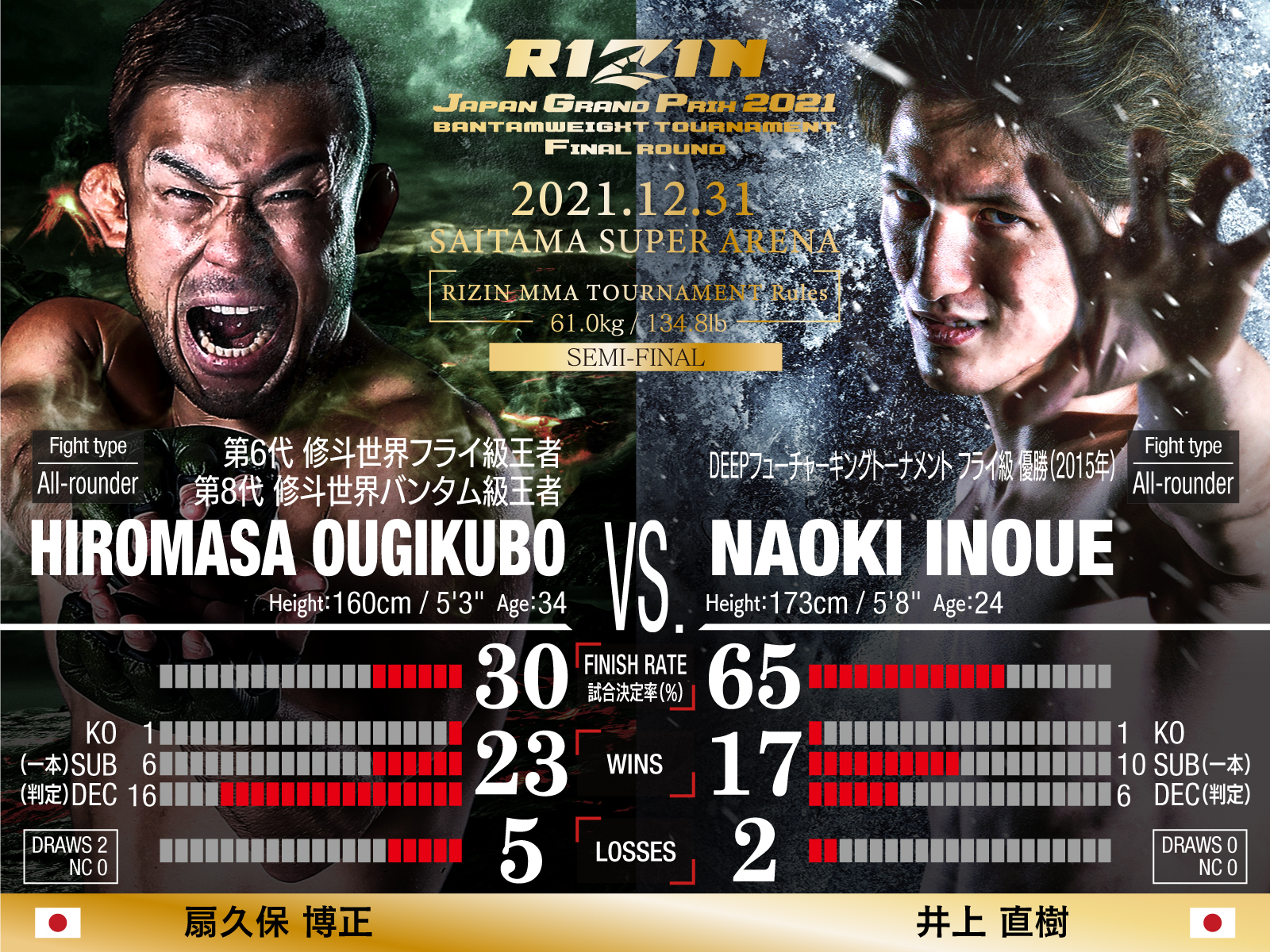 Two of the tournament’s best grapplers will face each other in the semi-finals of the BW GP. Photo courtesy of Rizin FF.

Hiromasa Ougikubo (25-5-2) has made a name for himself as being one of the most durable fighters on the Rizin roster. He has a seemingly infinite gas tank and is known for being the forward pressure to his opponents. Although he is not a prolific finisher, he dominates his fights by using striking to set up his grappling and wrestling. Throughout his career, Ougikubo has always been a bridesmaid never a bride. Despite making it to the finals of The Ultimate Fighter, he never got signed by the UFC. He was not successful in his title challenge for then bantamweight champion Kai Asakura. This could be his last opportunity on a major stage to cap off his career with the accolade of becoming the Rizin Bantamweight Grand Prix winner.

Naoki Inoue (17-2) has had an incredible post-UFC career. He is undefeated in Rizin and has managed to submit two of the best submission grapplers in the promotion. He also scored his first TKO win this year as well. One of the favorites to make it to the final of the GP, he has managed to evolve his MMA game from grappling and has become an adept striker with high volume and precision.

Kai Asakura is the favorite to advance, but Kenta Takizawa should not be underestimated. Photo courtesy of Rizin FF.

Kai Asakura (18-3) is one of the most popular fighters on the roster and whenever he fights, people always tune in. The former bantamweight champion is also one of the few people who has beaten Kyoji Horiguchi and has many memorable finishes in his Rizin tenure.

Kenta Takizawa (13-7) is the most unlikely candidate out of the four fighters to have made it this far. Takizawa was the only fighter out of the four to get a finish to advance to the semifinals. He is not the most well-rounded fighter, but his long reach and able to punch from all angles make him a crafty opponent. 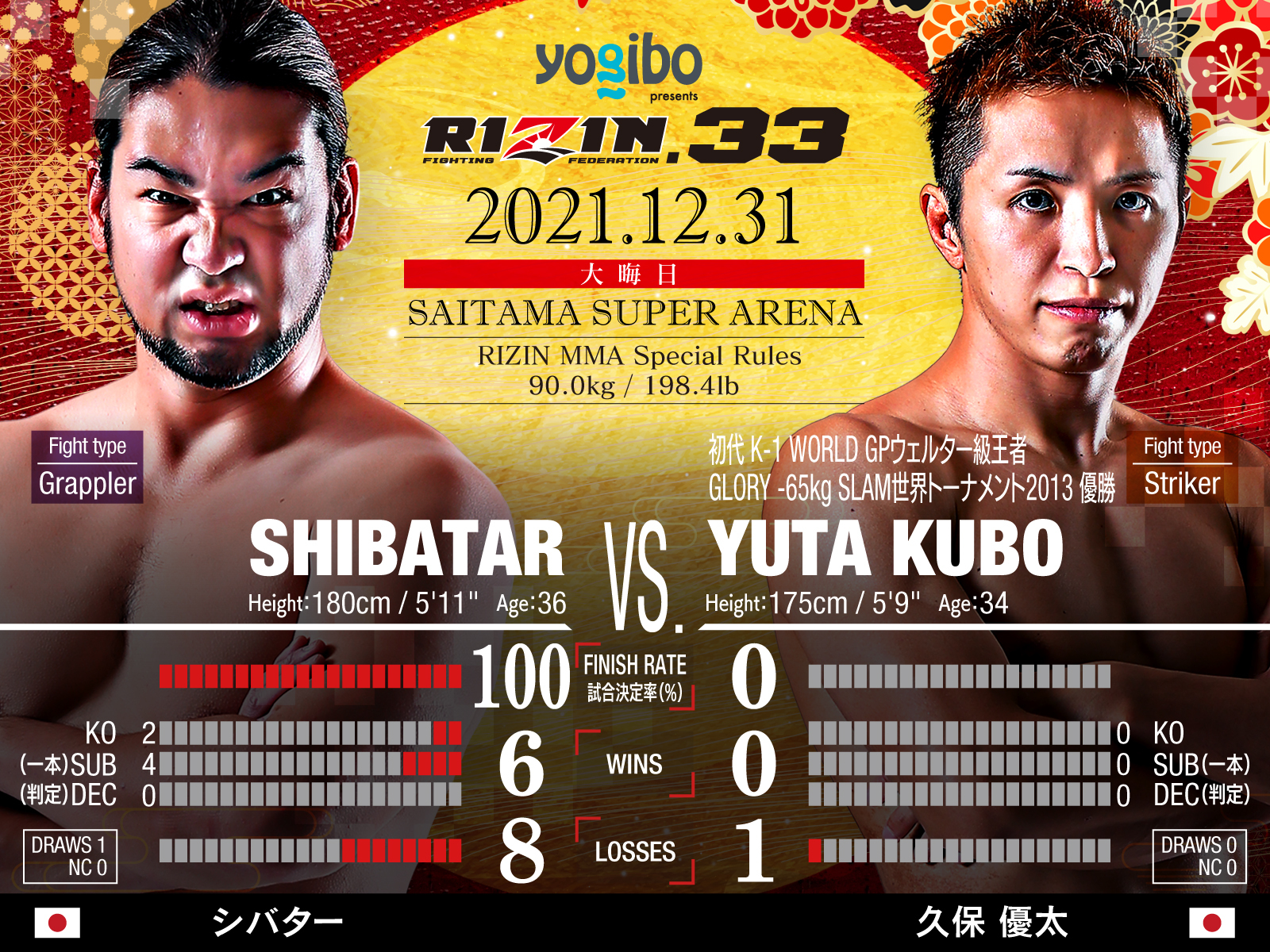 In the meme fight of the night, Shibatar makes his long-awaited return to Rizin to take on the eccentric Yuta Kubo. Photo courtesy of Rizin FF.

Shibatar (6-8-1) made a meme-worthy splash last year at Rizin 26 defeating kickboxer Hiroya in a mixed rules match. The YouTuber not only managed to get one knockdown on the former K-1 kickboxer but locked in an armbar in the MMA round that made Hiroya tap, but the referee missed it. Luckily the judges later announced it as a submission for Shibatar.

Yuta Kubo (0-1) is a former K-1 champion kickboxer. He made his Rizin and MMA debut at Rizin 30 losing to Olympic medalist wrestler Shinobu Ota. Even though he will be coming in at a weight disadvantage against Shibatar, he has the striking acumen to potentially defeat the YouTuber. 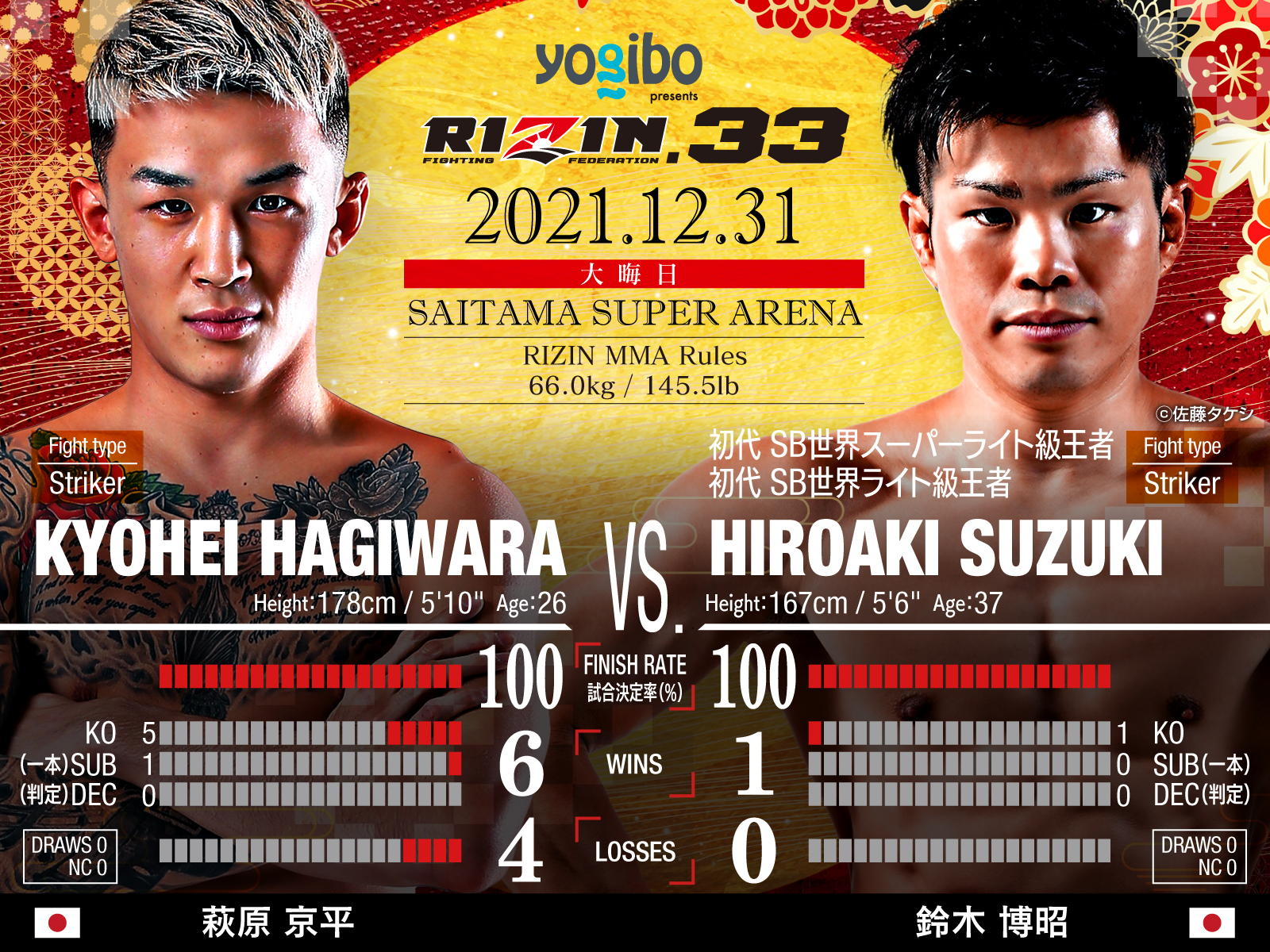 These two brawlers guarantee the fight doesn’t go beyond the first round. Photo courtesy of Rizin FF.

Kyohei Hagiwara (6-4) is making a name for himself as one of Rizin’s most colorful personalities and exciting finishers. Every win of his Rizin tenure has been a brutal TKO/KO. He also has no problem talking trash to his opponents to make his matches a heated affair and something fans always look forward to.

Hiroaki Suzuki (1-0) may be 37, but brings an extensive shootboxing background to his second MMA fight. A crazy brawler, he KO his first opponent Keisuke Okuda in the first round. Expect him to literally not pull any punches during the fight.

Kota Miura def Yushi in Round 1 via TKO (soccer kick and punch) in 3:00