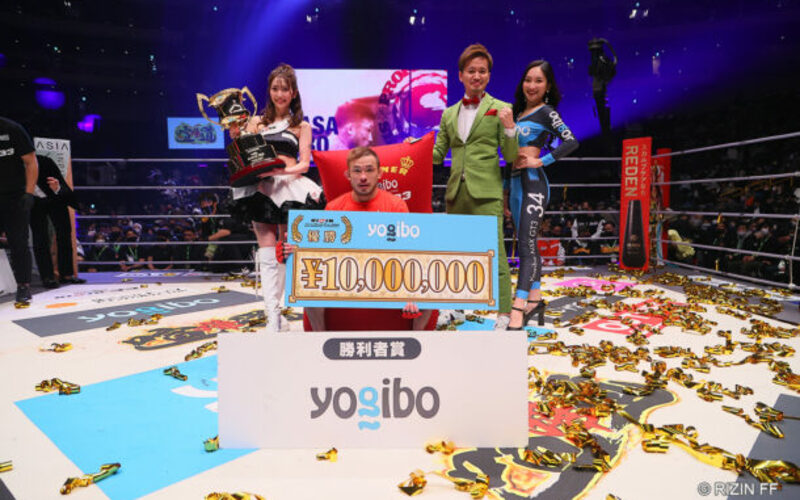 With the final and biggest Rizin show of the year in the books, Rizin 33 saw some incredible matches. There were upsets, come-from-behind wins, and one fantastic debut. Here is a look at some of the standout performances from the show, and predictions where the fighters could go from here. As always, Rizin has uploaded the full fights on YouTube, so make sure to watch them and see how everything transpired.

Kota Miura (1-0) was coming into his fight debut with a lot of scrutiny and pressure. Not only was he was making his MMA debut, but he is also the son of the most famous Japanese soccer player, King Kazu. On top of that, he was making his debut at the big New Year’s Eve show in front of 10,000+ people. Despite all that pressure that could’ve gotten to him, he managed to make a memorable debut.

In the first round, Miura showed exceptional grappling by locking a guillotine choke after some aggressive tie-ups with his opponent Yushi. Yushi seemingly went out, but the ref for some reason did not end the fight. Miura transitioned to a triangle, but Yushi was defending. Miura then went for an armbar from the triangle and Yushi still wouldn’t tap. Yushi got out but Miura responded with a soccer kick to the chest and a punch and the fight was ended.

What’s Next for Miura

Kota Miura still has to grow and train hard at the sport. His training at the Kazuyuki Miyata-run Brave Gym has clearly paid off as he showed what skills he currently has. While Rizin is the big dog of MMA in Japan, he should still be developed from the ground up. He should go to a promotion like Deep and start fighting some of the fighters there. Rizin might be wanting to push him due to his celebrity status, but doing so could be detrimental to the future of his MMA career.

MMA has a history of fighters who were always contenders but never won the big one. Hiromasa Ougikubo’s (25-5-2) career has been plagued with being a bridesmaid but never the bride. He was a runner-up on The Ultimate Fighter, losing in the finals and never getting signed. Then he got his shot at the Rizin bantamweight title and lost Kai Asakura in the first round. When the Rizin Bantamweight Grand Prix was announced, Ougikubo was thought to make it to the quarter-finals but would not win. He proved to everyone that he still has it and is one of the top bantamweights in the world.

In his first fight against Naoki Inoue, despite getting out-grappled in the first round, he turned the rest of the fight in his favor. In rounds two and three, he turned up the pressure significantly and was able to takedown and hold Inoue on the ground. He even managed to take Inoue’s back at one point.

In the finals versus Kai Asakura, he was able to outstrike and takedown Asakaura multiple times. It was three rounds of domination against one of the Grand Prix favorites. His win secured him a trophy and 10 million yen and a fiancee, proposing to his girlfriend after his win.

With Ougikubo being the top bantamweight in Rizin right now, the fight to make would be him versus champion Kyoji Horiguchi. However, Horiguchi is tied up with the Bellator Bantamweight Grand Prix. With no way for Horiguchi to defend the title for possibly the entire year, he should vacate. Ougikubo should then have to fight another top bantamweight for the title. In the meantime, he should get ready to prepare for the wedding.

Looking at Hideki “Shrek” Sekine (11-5), it is easy to see why he has the nickname. He is the not prettiest fella. His body proportions are also different from many other heavyweights. He is short at 5’9, has stumpy legs, and his upper body is pretty much all muscle. He took on one of the top heavyweights in Japan, Shoma Shibisai, whose wins have all come by finishes.

In the first round, it looked it would be all over for Shrek. He was getting rocked and taken to the ground with ease by Shibisai. Then the second round the momentum shifted. Even though Shrek was breathing heavily, he was still throwing heavy overhands while screaming “SHIBISAI!” Shibisai himself was getting tired as well. Shrek capitalized by sweeping Shibisai and delivering hammerfists from side control. Shibisai never tried to get out of the precarious position and the ref stopped the fight. Both fighters were extremely exhausted after the fight.

What’s Next for Shrek

Shrek is probably not going to win any championships. The 48-year-old from Bonsai Gym, however, is on a three-fight winning streak, with all of them being finishes. He beat arguably the best heavyweight in Japan. He is also an active pro wrestler, so who knows if he plans any fighting in 2022. If he chooses to come back to Rizin, Tsuyoshi Sudario vs Sekine should be booked. Sudario has fought mostly pro wrestlers in his MMA career and suffered his first loss to Shibisai. If Sekine is truly making a turnaround in his career, Sudario will be a high-level fight for him to take.

If there is any fighter in Rizin who truly has become a star in the pandemic era of the promotion, it is lightweight champion Roberto “Satoshi” de Souza (13-1). The Brazilian Jiu-Jitsu black belt has finished all of his wins both on the feet and on the ground. In this rematch with Yusuke Yachi, it would also be his first defense as champion. Satoshi won the first outing, but this fight was two rounds of domination by Satoshi.

There is not much to say about the two rounds that this fight lasted. It was nearly a 100% dominant performance by Satoshi, who won in striking, takedowns, grappling, and ultimately locking in a triangle armbar to secure the win.

What’s Next for Satoshi

Satoshi is likely to be the top dog of the division until he gets the ability to face some foreign competition. The fight at New Year’s Eve was supposed to be initially Tofiq Musayev, but with Musayev signing with Bellator, that is out of the picture for the future. The only person to ever have beat Satoshi is Johnny Case. Case made a special appearance on the English commentary and while not saying anything definite, it can not be a coincidence. If Case can make it into Japan, that will without a doubt be the toughest fight for Satoshi.