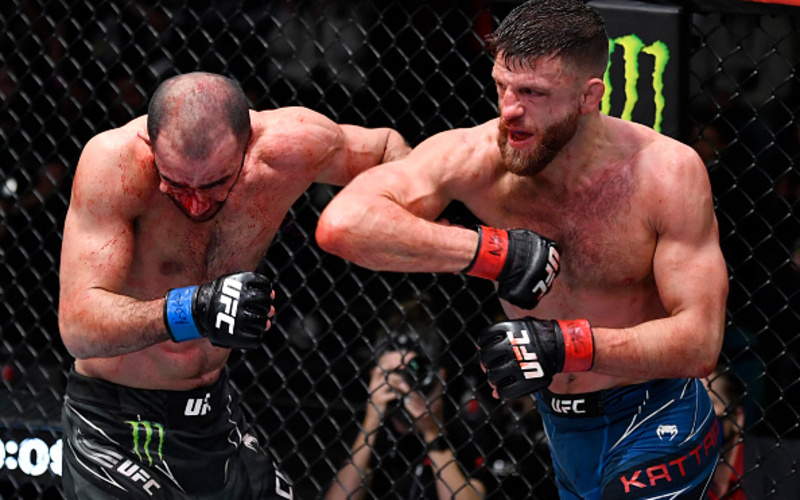 UFC Vegas 46 set the bar for main events in 2022 very high after Calvin Kattar and Giga Chikadze put on an exemplary display of technical brutality for five rounds. In an absolutely sensational fight, Kattar gets the unanimous decision win (50-45, 50-45, 50-44) against the highly touted featherweight contender from the Kings MMA gym in Huntington Beach, CA.

Building off the momentum of a 9-fight win streak, the oddsmakers listed Chikadze as a -225 favorite to the +185 Kattar– whom we haven’t seen since his damaging loss to Max Holloway in 2021.

As Chikadze and Kattar came face to face in the Octagon, there was a brief moment in their staredown that neither opponent went to touch gloves. Both fighters completely zoned in, as the implications of this fight were immense for both men: a potential title fight for Chikadze and the salvaging of a reputation for Kattar.

Kattar not only “saved” his reputation, but he also won with such conviction that he completely dismissed the narrative that the historic beating he took against Holloway resulted in irreversible damage or a derailment of his career. ESPN’s Marc Raimondi reported that “Calvin Kattar did not train with contact until last summer. (Tyson Chartier and team) were patient, let him heal up.”

Chikadze came out immediately chopping at the legs of Kattar, who was leading the dance and even chasing Chikadze as he circled out in his elusive style. Chikadze looked slightly quicker than Kattar on the feet in the initial exchanges. However, Chikadze’s high volume paired with the sporadic speed resulted in a slip on a high head-kick attempt at 3:31 seconds of the first round, leaving a brief moment for Kattar to pounce for a takedown. Kattar utilized his high school grappling roots and capitalized on Giga’s mistake. The Boston Finisher dominated ground control in half-guard for over a minute before Chikadze attempted a guillotine choke. Kattar used his defensive wit and got to the opposite side of the guillotine — eliminating any danger, before transitioning from side control, to knee on belly, attempting an arm triangle, and eventually scrambling to take the back of Chikadze and holding him in a body triangle for the final 36-seconds of the opening round.

Calvin Kattar opened the second round by sticking the jab, leading the dance, and keeping his opponent on the back foot. Chikadze let the body strikes fly, but Kattar continued to apply forward pressure and would step through and unload on switch stances to avoid the famous Giga kick. At 3:55, a pink mark began to show on Kattar’s right side where Chikadze was connecting. The constant pressure from Kattar tired Chikadze and after three minutes, it became a boxing match with the low output of kicks from the Georgian. There were 40-seconds left when Kattar landed his first spinning back elbow of the night; although, Chikadze was throwing back but was visibly labored and was taken down with less than 10 seconds in the round.

Tyson Chartier provided Kattar with technical advice before reminding him that his mom and sister are in the audience and want to see him win.

The live odds swung to favor Kattar at -340.

A minute and a half into this round, it was very clear Chikadze was winded and getting pieced up on the feet. This was Giga’s lowest-performing round with only 67 attempted significant strikes. With two minutes left in the round, Kattar had outstruck Chikadze 29 to 19.

“Set up your punch for your kick. Prepare set-ups for your kicks. Don’t waste your energy on your punches. It has to be the right punch to the kick.” – Rafael Cordeiro

This was the first fourth round in MMA for Giga Chikadze. Kattar was beginning to make consistent use of the right jab to elbow slices. Chikadze was completely busted open and showed his warrior-like toughness and managed to avoid a takedown at 2:30. With less than two minutes to go, Kattar was throwing back to back 1-2 elbows and they continued to cut open Chikadze’s cuts.

Kattar headed to his corner as the crowd chanted his name.

“Are you ready to go? Let’s go get the hand raised. Stay on him. You’re in a knife fight. Get in a knife fight and f*ckin push forward. Lock your hands up when you have to and if he starts breaking it, strike off the exit. I trust you. I believe in you.” – Head Coach Tyson Chartier

Giga Chikadze comes out swinging and evading Kattar’s offense initially. However, the non-stop onslaught of Kattar with a combination of step-through elbows and another spinning back elbow. To put the final stamp on Kattar’s dominant performance, he managed to end with a flurry that puts Chikadze on his back. Had Chikadze not been saved by the bell, there was potential for Kattar to get a TKO victory through ground and pound– which could be the reasoning behind Judge Chris Lee’s 10-8 scoring of the final round.

Kattar outstruck Chikadze 51 to 32 in the final round, per UFC website.

The MMA world came full circle when Calvin Kattar displayed a flow-state-like beating against Giga Chikadze that can only be compared to the same beating he was on the opposite end of in the Max Holloway main event, January 16th, 2021. It’s been 364 days of MMA media and fans, barking at the notion that Kattar may never be the same after absorbing a historic amount of damage against the uncrowned featherweight champ. Despite the skeptics putting Kattar as the underdog, Tyson Chartier and the rest of the New England Cartel never lost trust. Never lost their belief in the Boston Finisher.

Instead of calling someone out in his post-fight interview, Kattar wished a happy birthday to his brother. He accepted his big win with such grace and a humble attitude– assuring the audience that he’s known what he was capable of and that it is all of us that forgot.

“That guy is an absolute dog. He is a fuckin’ warrior.” – Dana White in the post-fight press conference

The hot streak to Giga Chikadze has come to a Boston cold stop. With only two losses on his record heading into this fight, there wasn’t much footage coming in on how to beat Giga– however, the Boston Finisher just made the blueprint very clear on a huge stage. As Giga takes the necessary time to heal and heads back to the esteemed Kings MMA gym, Rafael Cordeiro and the team will work with him on his championship round cardio and ensure he continues to set up his kicks with punches– rather than getting caught up in a straight-up boxing match when tired. Ultimately this cycle of veteran fighters imposing pure punishment on rising contenders will continue. Giga Chikadze will learn from this loss and come back stronger, but what could be next for Chikadze? There are few things in life that are more dangerous than a fighter coming off of a loss, so whoever is up next for the Ninja should be weary the blueprint to beating him may be much more complex on the next go-round.

We’ll have to wait to see how a few other matchups in the featherweight division go. The featherweight title is up for grabs at UFC 273 on April 9th, 2022, where the Korean Zombie is replacing Max Holloway to take on Alexander “The Great” Volkanovski. Although there has yet to be an official announcement, a match-up between Yair Rodriguez vs. Brian Ortega is a fan favorite and could be a reasonable move per rankings. The only people ahead of Chikadze are the #7 ranked Almighty Arnold Allen (17-1) and Josh Emmett of Team Alpha Male. While it is unclear which way the UFC might decide to go, one thing is for sure: both these guys need to rest and recover, enjoy their 50k Fight of the Night bonus, and spend quality time with their families.