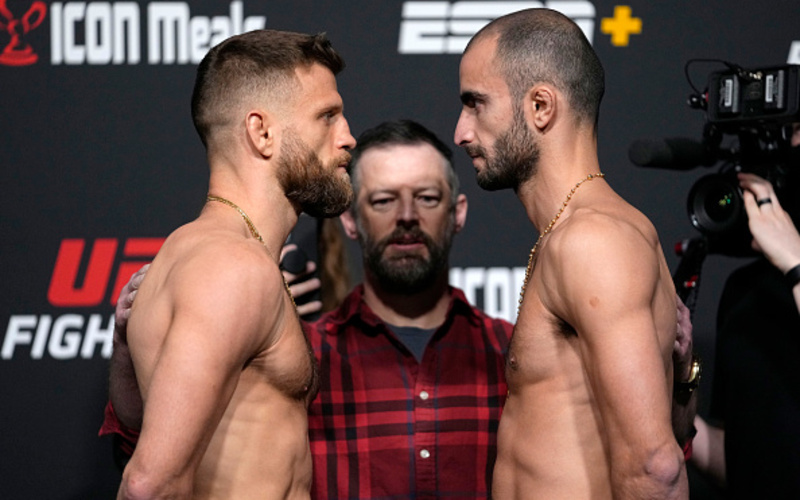 The UFC’s first card of the new year is here as Saturday’s main event features a matchup in the top ten at featherweight as MMASucka provides UFC Vegas 46 results. Facing off in the headliner will be fifth-ranked Calvin Kattar and eighth-ranked Giga Chikadze.

Entering Saturday night’s main event, Calvin Kattar brings with him a record of 2-1 in his last three outings. In 2020, Kattar went undefeated with two wins that year. The first of those wins was a very impressive elbow knockout finish over Jeremy Stephens in their meeting at UFC 249. A couple of months later, Kattar faced off against Dan Ige in the main event of UFC on ESPN 13. Kattar’s second straight win came that night as he defeated Ige by unanimous decision. That win earned Kattar another main event matchup in January 2021 as he took on former featherweight champion Max Holloway. Holloway snapped Kattar’s win streak that night with a one-sided unanimous decision win. Kattar will be looking to bounce back from his loss against Holloway as he takes on yet another tough opponent in Giga Chikadze.

Giga Chikadze made his UFC debut in 2019 and, seven fights later, he holds an undefeated record in the Octagon of 7-0. Prior to his UFC debut, he had won another two straight, putting his overall win streak at nine straight. In Chikadze’s first four fights with the UFC, each fight went to the scorecards with Chikadze winning some form of decision. His first two wins were back-to-back split decision wins over Brandon Davis and Jamall Emmers. Those wins were followed by back-to-back unanimous decision wins as he defeated Irwin Rivera and Omar Morales. After those wins, Chikadze would then put together back-to-back TKO finishes as he took out both Jamey Simmons and Cub Swanson within the opening five minutes. With a 6-0 record in the UFC, Chikadze earned his first main event as he took on Edson Barboza in his most recent outing. Chikadze won that fight with a third straight TKO finish as he finished Barboza in round three. Chikadze looks to win his tenth fight in a row as he takes on Kattar at UFC Vegas 46.

Before Saturday’s main event, the co-main event of the evening features a heavyweight matchup between Jake Collier and Chase Sherman. Each man enters the fight coming off a loss in their most recent outing as Sherman has lost his last two straight while Collier has gone 1-2 in his last three fights.

After testing positive for higenamine in early 2019, Collier was suspended by USADA for ten months, making him eligible to return later that year. Prior to this happening, Collier’s last outing was in 2017. After that, he was scheduled to fight in 2018, but he was forced out with an injury which would then lead up to the failed USADA test about a year later. When he finally returned, after nearly three years away, he faced off against Tom Aspinall at UFC on ESPN 14. Collier lost to Aspinall in that fight as Aspinall finished him less than a minute into the first round by TKO. Following that loss, Collier would go on to pick up a unanimous decision win over Gian Villante at UFC on ESPN 19. Finally, in Collier’s most recent fight, he lost once again as he suffered a split decision loss to Carlos Felipe at UFC 263. After alternating wins and losses for his entire UFC career, Collier looks to put together his first win streak.

In order to do that, Collier will have to avoid a loss on Saturday against Chase Sherman, which would be the first losing streak in Collier’s career. Sherman will be entering this fight on a losing streak of his own as he has lost his last two straight outings after winning four straight from 2018-2020. After a brief two year stint with the UFC from 2016-2018, Sherman would go on to briefly fight outside of the UFC where he put together a record of 3-0 with Island Fights. That would earn him another opportunity with the UFC as he made his return in 2020 against Ike Villanueva. In that fight, Sherman won his fourth straight fight with a second round TKO over Villanueva. Since then, Sherman has lost both of his last two outings by unanimous decision as he was defeated by Andrei Arlovski and Parker Porter. Sherman looks to get back on track and snap his two fight losing streak with a big win over Collier.

Kicking off UFC Vegas 46’s main card will be a fight in the featherweight division as Bill Algeo takes on Joanderson Brito. Since making his UFC debut in 2020, Bill Algeo has put together a record of 1-2 during his UFC career. In Algeo’s most recent outing, he suffered a unanimous decision loss against Ricardo Ramos at UFC Vegas 27. He looks to get back on track against Joanderson Brito who will be making his UFC debut. After a successful showing on Dana White’s Contender Series, Brito makes his UFC debut against Algeo as he enters the cage on a ten fight win streak. In his Contender Series bout, Brito faced off Diego Lopes. Lopes won his fight that night, defeated Lopes by a technical decision after Lopes could not continue due to an eye poke from Brito. Brito had a point taken from him but still got the victory on the judge’s scorecards to earn himself a UFC contract.

In the second fight of Saturday’s main card, lightweights Dakota Bush and Viacheslav Borshchev face off as Bush looks to rebound from a loss in his UFC debut, while Borshchev will be making his own debut. Bush made his Octagon debut in April 2021, where he suffered a unanimous decision loss to Austin Hubbard at UFC Vegas 24. Bringing his overall record to 8-3, Bush looks to bounce back and secure his first UFC win against Borshchev. Borshchev enters the fight with a record of 5-1 as he has won his last three straight. In his Contender Series bout, Borshchev finished Chris Duncan by knockout in the second round of their week seven meeting. Borshchev looks to make it four in a row as he tries to secure a win in his UFC debut against Bush.

Following the matchup between Bush and Borshchev will be a matchup between two former women’s flyweight title challengers. That matchup will be a top five clash between the second-ranked Katlyn Chookagian and fourth-ranked Jennifer Maia. Coming into this meeting with Maia, Chookagian has won her last two straight outings. Both of those wins came by unanimous decision as Chookagian picked up wins over Cynthia Calvillo and Viviane Araujo. As for Maia, she has fought once since her title fight loss to the champion Valentina Shevchenko. In her one fight since, Maia picked up a unanimous decision win over another former title challenger, Jessica Eye. Both women look to add to their own win streaks as they enter the Octagon on Saturday.

Finally, before the evening’s co-main event will be a top ten matchup in the flyweight division as fifth ranked Brandon Royval takes on seventh ranked Rogerio Bontorin. Since making his UFC debut in 2020, Royval has put together a UFC record of 2-2 with some exciting outings. He picked up two straight submission wins to start his UFC career as he defeated Tim Elliott and Kai Kara-France. Since then, Royval has lost his two most recent fights as he suffered a TKO loss to future UFC champion Brandon Moreno. That loss was followed by a submission loss in his most recent fight against Alexandre Pantoja. As Royval looks to snap his losing streak, Bontorin looks to pick up his second straight win while handing Royval a third straight loss. After a two fight losing streak that saw defeats against Ray Borg and Kara-France, Bontorin has since picked up a win. In his most recent outing, Bontorin defeated Matt Schnell by unanimous decision at UFC 262.

Follow along with MMASucka as we provide you with UFC Vegas 46 Results throughout the card.