Charles Oliveira to Defend Title Against Justin Gaethje at UFC 274 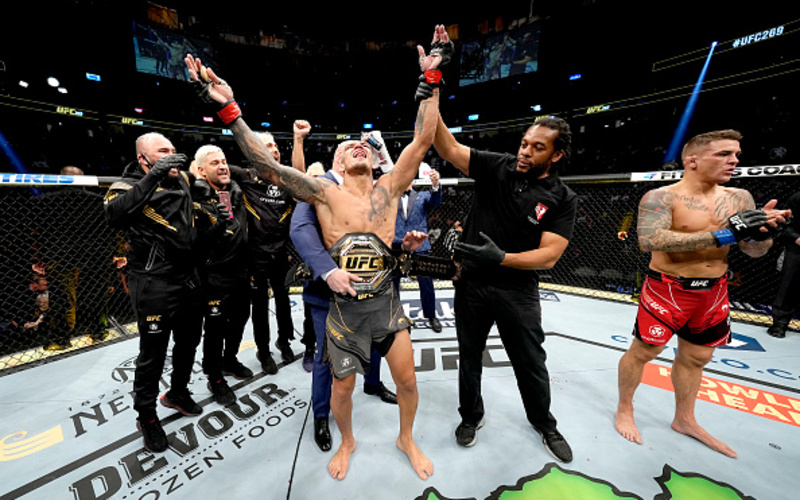 Image caption: LAS VEGAS, NEVADA – DECEMBER 11: Charles Oliveira of Brazil reacts after being announced the winner by submission against Dustin Poirier after their UFC lightweight championship bout during the UFC 269 on December 11, 2021 in Las Vegas, Nevada. (Photo by Jeff Bottari/Zuffa LLC)

Charles “do Bronx” Oliveira (32-8), the current UFC lightweight champion is set to defend his belt against Justin “The Highlight” Gaethje (23-3) at UFC 274 on May 7, according to ESPN. The venue is unconfirmed as of now, as it was originally planned to take place in Brazil, but it may shift back to the United States.

Oliveira first won the illustrious UFC lightweight title by defeating Michael Chandler via TKO back at UFC 262. The champ then defended the title for the first time at UFC 269 by earning a third-round submission via rear-naked choke against the former interim champion Dustin Poirier.

Oliveira at age 32, has seemingly been around the UFC forever. The Brazilian fighter first made his debut in the UFC back in 2010 against the UFC veteran Darren Elkins and has compiled a (20-8) record since. Oliveira holds the record for most finishes in the UFC with 18, as well as the most submissions at 15. He has fought many notable fighters such as Donald Cerrone, Frankie Edgar, Max Holloway, Anthony Pettis, and Tony Ferguson on his way to the top. Oliveira is riding a 10-fight win-streak and is on pace to UFC legend status.

On the other hand, Justin Gaethje will be looking to capture his first undisputed UFC lightweight championship after falling short in a title unification bout against the former undisputed champion Khabib Nurmagomedov at UFC 254 in 2020.

Gaethje is most definitely one of, if not the most exciting and violent fighters on the current UFC roster. Since arriving to the UFC in 2017, all but one of Gaethje’s wins have been by finish (with the one decision win being against former title challenger Michael Chandler). Gaethje is a former Division I All-American wrestler but we do not often get to see his grappling abilities. What Gaethje is known for is his extremely aggressive fighting style that he seems to improve every time he steps into the cage. It will be interesting to see if Gaethje will be able to use his wrestling background to neutralize the threat of takedowns/submissions from Oliveira.

Not to mention, Gaethje is also cornered by the mastermind in Trevor Wittman, who also coaches current UFC champions Kamaru Usman and Rose Namajunas, so there should be no doubt in his abilities to prepare Gaethje to the utmost extent for his second crack at the title.

This championship bout will almost guarantee drama and fireworks as these two lightweights look to throw everything they have at each other to determine who the best in the world is.

This fight will serve as the co-main event for UFC 274 with Glover Teixeira defending his light heavyweight belt against Jiri Prochazka.