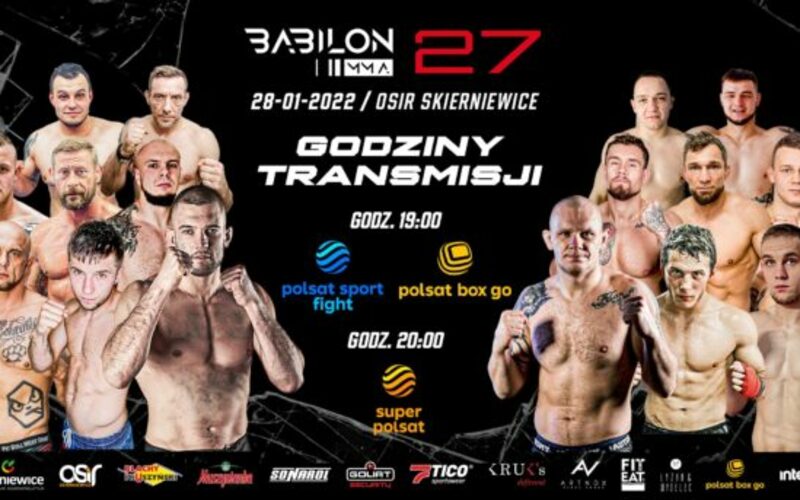 Babilon MMA 27 will be the promotion’s 2022 kickoff event. Fans gathered in OSIR hall in  Skierniewice will see a clash between two ambitious Polish Light Heavyweights, Łukasz Sudolski and Michał Pasternak.

Initially, Sudolski’s opponent was to be Mindaugas Gerve. However, the Lithuanian had to withdraw from the bout. Georgi Lobonidze was the replacement, but the Georgian also dropped out of the fight card. Ultimately, Pasternak stepped in to take on Sudolski. The Beserkers Team Szczecin member returns to the cage after his first professional defeat, which happened during Dana White’s Contender Series. Sudolski lost to Ihor Potieria by a TKO in the first round. Before that, Sudolski remained undefeated in eight professional fights.

Pasternak, on the other hand, is a very experienced fighter. ‘Vampire’ fought in various promotions, including ONE Championship, and also took part in bare-knuckle fighting tournaments. What’s interesting, he fought just a week ago at Wotore 4 event, where he defeated Simon Henriksen and won the Wotore title. His last professional MMA fight took place at MMA-VIP on October 29th 2021, when he won by TKO over Kornel Zapadka and gathered another belt to his collection. This time Pasternak will have to test himself against Sudolski, who is almost a decade younger than him.

In the co-main event, there will be a clash within the contractual limit of up to 68 kg. Karol Kutyła will fight Piotr Wróblewski. There will be eight MMA fights in total, including two contested under the Semi-Pro ruleset with 3 rounds of 3 minutes each.

Karol Kutyła def. Piotr Wróblewski by TKO (Punches), 2:10 of Round 2

Piotr Drozdowski def. Norbert Jabłoński by Submission (Armbar), 2:05 of Round 1

Adam Łazowski def. Przemysław Matuszewski by TKO (Ground and pound), 3:29 of Round 2