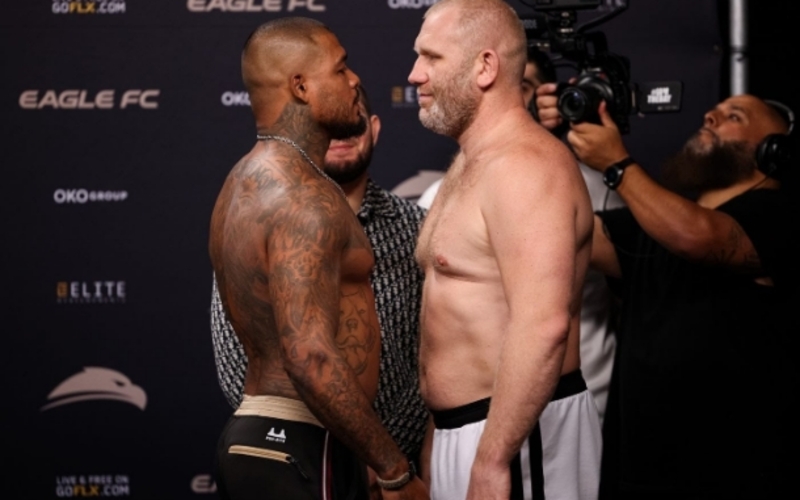 Eagle FC debuts on American soil tonight as it hosts Eagle FC 44 in Miami, Florida. MMA Sucka brings live coverage of this event and many more.

In the main event, world class striker Tyrone Spong (2-0) makes his return to MMA against highly praised Pride and Bellator vet Sergei Kharitonov (33-9). Sanford MMA’s Spong is a veteran of 116 kickboxing bouts and holds a record of 107-7-1 (1NC) scoring 73 wins by knockout. He also holds an undefeated record as a pro boxer earning 13 of his 14 wins by knockout. Spong has also competed twice in pro MMA winning both bouts, one by knockout. With that being said the 36-year-old’s last MMA bout was in 2013 at WSOF 4. Spong is one of the most powerful strikers in the business and is an electric talent to watch.

Kharitonov is an unreal striker as well, however, he is beyond quality in the grappling department. The 41-year-old Russian makes the trip to Miami seeking his second straight victory after defeating UFC veteran Fabio Maldonado at Parus FC back in August. Kharitonov has shared the cage with the likes of Andrei Arlovski, Alistair Overeem, Rico Verhoeven, Fabricio Werdum and several other combat sports legends. It’s clear the Russian has been more active within the last three years, even competing in two Bellator bouts since 2019, but never rule a guy like Tyrone Spong out of a fight. Expect this to get violent as two world class strikers cap off a stacked card put together by the legendary Khabib Nurmagomedov and the Eagle FC team.

Co-headlining the card is a lightheavyweight battle between UFC Hall-of-Famer, former UFC light heavyweight champion, and TUF 2 winner Rashad Evans (19-8-1) and Jiu-Jitsu wizard Gabriel Checco (12-5). Evans returns to MMA after a three and a half year layoff to compete in his first bout outside the UFC since 2004. The 42-year-old was once considered the best in the world and looks to get back on track after dropping five straight since 2013.

This is not an easy test for Evans as Checco has competed with a fair share of legends as well, whether that be in Jiu-Jitsu or MMA. Checco is riding high as he defeated Simon Marini at XMMA 3 back in October. The 35-year-old has finished all 12 of his pro MMA wins and has been to decision just twice in 17 fights. Although he is a high level Jiu-Jitsu black belt, don’t sleep on his hands, as he’s scored seven career knockouts. Checco has shared the cage with UFC veterans Jake Collier, Ian Heinisch, and Jordan Wright. This is absolutely no walk in the park for Rashad Evans; in fact, he has his hands full tonight. It will be a pleasure to watch a legend back in his natural environment.