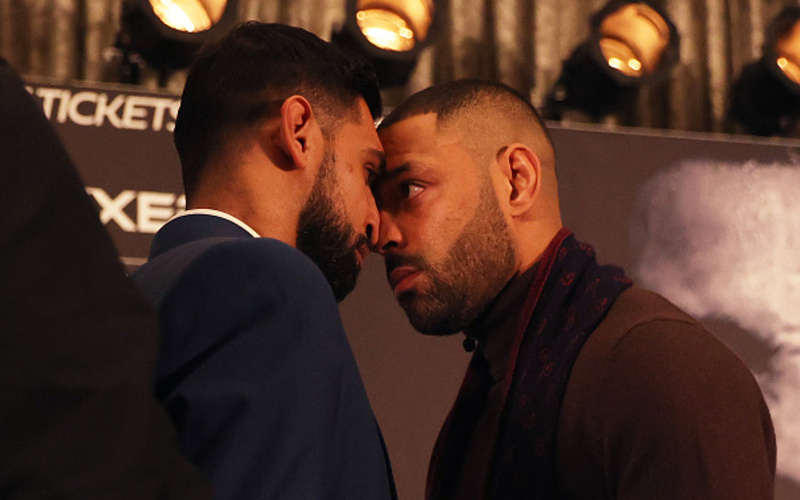 Manchester is the setting in which the grudge match between Amir Khan and Kell Brook will finally come to a head. The bad blood between these two British welterweights will be settled in the squared circle. Although the fight itself comes years after it should have, finally, both men can put an end to this chapter of their respective careers.

Elsewhere on the card, Liverpool’s Natasha Jonas goes for yet another world title when she clashes with Chris Namus. Viddal Riley returns and we also get the debut of Olympic Bronze medalist, Frazer Clarke.

There’s no denying that these two former world champions are far past their best. This fight should have happened years ago. The two infamously clashed back in 2012 on ‘Ringside’, but finally, 10 years later we’ll get the fight.

Although they’re past their best, it was only two fights ago that Khan challenged for the WBO welterweight strap in a losing effort. We haven’t seen Khan since July 2019, when he defeated Billy Dib. He has, however, been in there with some of the biggest names in the division. Paulie Malignaggi, Marcos Maidana, Danny Garcia, Canelo Alvarez, Samuel Vargas and Terrence Crawford are all on the record of ‘King Khan’. Although they weren’t all wins, the experience of being in there with elite competition won’t have done Khan any harm.

Likewise, with Brook, he held the IBF title, capturing it against Shawn Porter in 2014. Gennady Golovkin, Errol Spence and Crawford are all names on Brook’s record who will have levelled Brook up no end.

Both men are experienced with a combined 81 professional fights. The higher-level experience, however, certainly sits with Khan. Multiple world title fights, including an extremely good showing against Canelo in the early rounds, suggest that he will be able to handle the pressure better than Brook. He has a unique ability to get under ‘Special K’s skin, which will play in his favour. He also holds a huge speed advantage, which is often the case for Khan. The main concern for team Khan is his susceptibility to being caught and dropped. Four of his five losses have come via TKO/KO.

On the other side, 27 of Brook’s 39 wins have come via knockout, including five of his last six. He’s certainly got the heavier hands, however, the fight is taking place at 149lbs. This is below the weight where Brook does his best work and therefore we have to ask whether his power will carry down, or whether the weight cut will take it out of him.

The two men had to meet before they called time on their respective careers to settle their bad blood. The bitter rivalry between the two will finally come to boiling point on Saturday night. Who will come out on top? We predict that Amir Khan will get his hand raised after 12 rounds. His speed will allow him to get in and out effectively, leading to him being able to get ahead early. The weight cut will have an effect on Brook, leading him to fade from round eight or nine onwards, allowing Khan to take his foot off the pedal in the final few rounds.

The co-main event will see Liverpool’s Natasha Jonas fight for what could be her last chance at a world title. She’s twice competed for world titles, firstly in a draw against Terri Harper and then in a narrow decision loss to Katie Taylor. The 37-year-old will clash with Chris Namus, a late notice opponent in Manchester.

The Uruguay native is the bigger woman and has more professional experience. With that being said, she’s only fought outside of South America three times, all of which saw her pick up a loss. She’s 1-2 since 2018 and hasn’t competed since October 2020 when she lost to Ema Kozin.

Jonas and Namus will clash for the WBO super-welterweight strap, potentially leading to a fight in the future with either Hannah Rankin, Patricia Berghult or Marie Dicaire, the title holders in other organisations.

Elsewhere on the card, KSI‘s boxing coach, Viddal Riley returns to the ring to face Craig McCarthy. Recently, Riley has been known more as an online personality, however, he wants to be known more for his skill inside the ring, rather than behind the mic.

Olympic bronze medalist Frazer Clark also makes his professional debut, however, as of yet, his opponent hasn’t been announced. Clark is a huge prospect, but at 30 years old, he needs to make a quick start to his professional career.