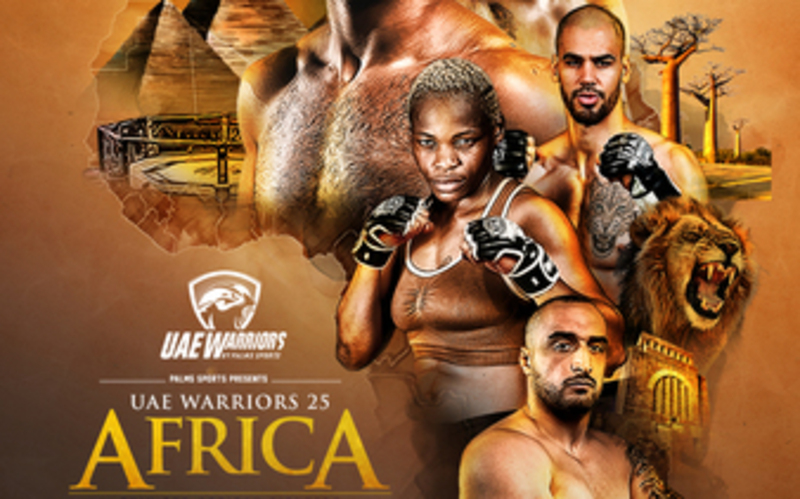 UAE Warriors finished on a strong note in 2021 and now, in 2022, they look to start off their year in a similar fashion. UAE Warriors 24 featured a host of African talent, and this was certainly noted and gave many fight fans the opportunity to actually witness talent from the continent. Now, UAE Warriors have actually put together a card that will be dedicated to showcasing MMA talent from the African continent with a bulk of the athletes currently being unsigned.

The UAE Warriors 25: Africa card will feature 12 bouts, and will see a total of 15 African nations represented. There will be representation from Nigeria, Tunisia, Angola, South Africa, Egypt, DRC, Morocco, Comoros, Senegal, Mali, Cape Verde, Gambia, Central African Republic, and Cameroon (which will have four fighters). Familiar names on the card will be the likes of former Cage Warriors champion Samir Faiddine (12-8), EFC champion Sindile Manengela (8-6), GLORY kickboxing title contender Yousri Belgaroui (2-0), Bellator veteran Iony Razafiarison (6-3), and many others. The two main events of the evening look to finish off the monumental event in style and leave fight fans ready for the UAE Warriors 26 event the next day.

The main event of this event is immediately intriguing because both fighters have something in common – they are both undefeated in their careers. Wisem Hammami (6-0) is based in Italy but he still represents Tunisia in his fights. Hammami’s amateur career began in late 2016, and he went on to have a 3-0 record during his time on that circuit. Thereafter, he began his pro career in 2018 and has been getting wins ever since. Shido Soto (5-0) also began his pro career in 2018 with a TKO finish in the first round. After that impressive debut, Soto made a home at Nigeria’s Warrior Sports Championship. When it came to Soto, it was always known that he would put on an impressive showing, and would definitely look to get a finish, earning him the nickname “Machine”. Hammami and Soto both have constantly proven to be able to do enough to secure the KO/TKO, submission, or decision win. Both fighters are yet to experience loss and they will certainly be looking to maintain that record going. Expect a hard-hitting fight where both fighters try to finish each other but one thing is for sure: One of their records will gain a loss to it.

The event is set to start at 6pm GST/9am EST on Friday, February 25th, and will be available to watch on UFC Fight Pass.