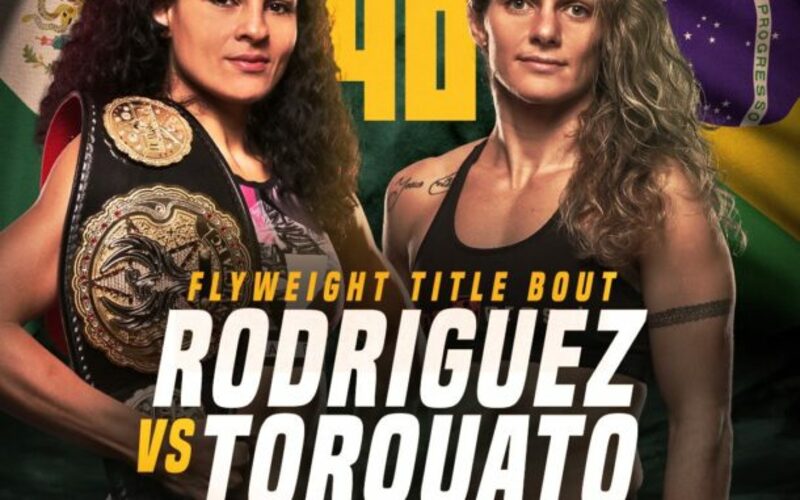 The all-female mixed martial arts promotion Invicta FC is back for their second event of 2022 with a five-fight card at Invicta FC 46. This time, they’ve put yet another championship crown on the line—that of flyweight champion Karina Rodriguez. Her original opponent, Ketlen Souza, withdrew from the bout just last week due to injury, but a new opponent stepped in just as quickly.

Now, the Invicta flyweight champ faces Daiana Torquato yet again at Invicta FC 46—the same woman she won her crown from last May.

The first time these two ladies met in the Invicta ring for a five-round championship bout—fighting for the then-vacant Invicta Flyweight crown. Rodriguez and Torquato noticeably did not shake hands when prompted by the referee.

During their first meeting, it looked like Torquato had something going for her in the first round, landing heavy right hands, but Rodriguez answered in kind knocking Torquato down with a clean right hook at the end of the second. The two continued into the later rounds with an aggressive back-and-forth as the Mexican started to pick up the pace – quickly closing the gap between their scores.

Rodriguez and Torquato spend the entire 25-minute bout on the feet, trading shots and dominance in the ring. Ultimately, the referee raised the Mexican’s hand at the end of the five rounds, and Rodriguez was crowned the new flyweight champion.

Karina Rodriguez comes into this second meeting on Wednesday with a 9-4 record. The Mexican stormed into Invicta with a knockout win against Barbara Acioly. At the end of the first round, she finished Acioly with a vicious ground and pound. She then went on a win-lose streak—her record featuring a unanimous decision win against DeAnna Bennett in 2019.

Rodriguez is known to be a bit of a slow starter, spending the first minutes of her bouts getting familiar with the opponent in front of her before throwing her big shots. However, the flyweight champion went through her entire fight camp training for a fight against Souza, who is an entirely different fighter to Torquato.

Experience may come in handy here, but has a change in opponent on four days’ notice completely ruined Rodriguez’s game plan? Fans will find out on Wednesday night.

Torquato’s second shot at the crown

Torquato joined the all-female promotion through the second-ever Phoenix Series, although unfortunately losing from a rear-naked choke given by the same Bennett that Rodriguez beat. She then went on to defeat Milana Dudieva via split decision and another against Sarah Frota in Respect MMA.

While Daiana Torquato was initially set to face Dudieva again in the co-main event, she quickly jumped at the opportunity for a second shot at the belt. The Brazilian rides a 10-4 record now and is on the brink of a losing streak, thanks to Rodriguez. Torquato, unlike Rodriguez, is a fast starter but tends not to hold her guard as fights go on.

Torquato has proven time and time again that she has the will to go the distance, but will she repeat the same mistakes from the first meet at Invicta FC 46?