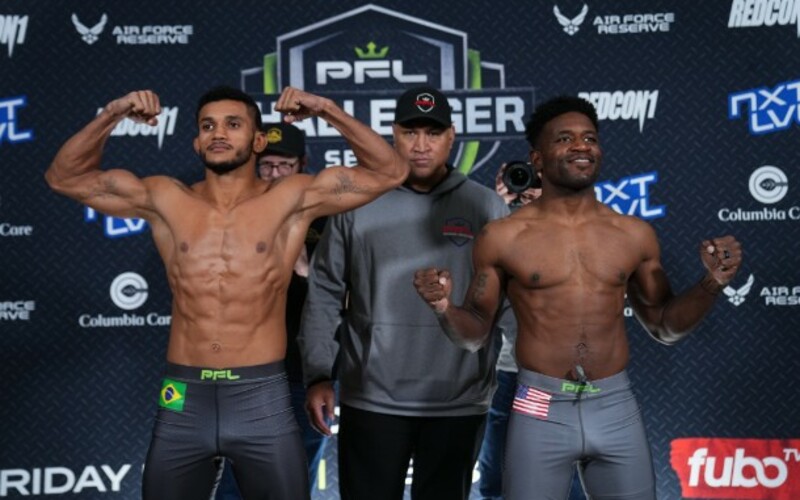 As the PFL Challenger Series rolls into its fourth week, the featherweights will take center stage as one man will walk away with a spot in the 2022 PFL season.

On the heels of three straight submission wins, Pitbull Brothers teammate Reinaldo Ekson gets a main event spot at PFL Challenger Series 4 against standout striker “Iron” Mike Barnett. All three of “Guerreiro” Ekson’s wins have come by three different types of chokes, all coming under the EFC banner. Only three of the LFA veteran and Alabama native Barnett’s 11 wins have gone to the judges’ scorecards. Expect this fight to not go to the judges’ scorecards in a classic striker vs. grappler matchup.

The PFL Challenger Series 4 co-main event brings former decorated NCAA wrestler and LFA contender Edwin Cooper Jr. to the PFL SmartCage to take on “Pretty Boy” Troy Lamson. After an armbar loss in his LFA debut, the Jackson Wink MMA-trained Cooper Jr. has rattled off three straight dominant victories. Lamson has not fought in over two years and is riding a two-fight losing streak, but all four of his career losses are against a UFC or Bellator veteran.

Hawaiian UFC veteran Boston Salmon will try to make his way in a new promotion against former UAE Warriors featherweight champion Do Gyeom Lee. “Boom Boom” Salmon was cut from the UFC following two straight first-round knockout losses, but rebounded in his last fight nearly two years ago at LFA 84. After defending his belt for the first time in 2020, Lee lost his belt to UFC veteran Ali AlQaisi back in October at UAE Warriors 24.

MMA Sucka has fight fans covered with PFL Challenger Series 4 results, with the four-fight card starting at 9pm ET/6pm PT only on FuboTV.

Boston Salmon def. Do Gyeom Lee via TKO (Corner Stoppage) at 5:00 of Round 2