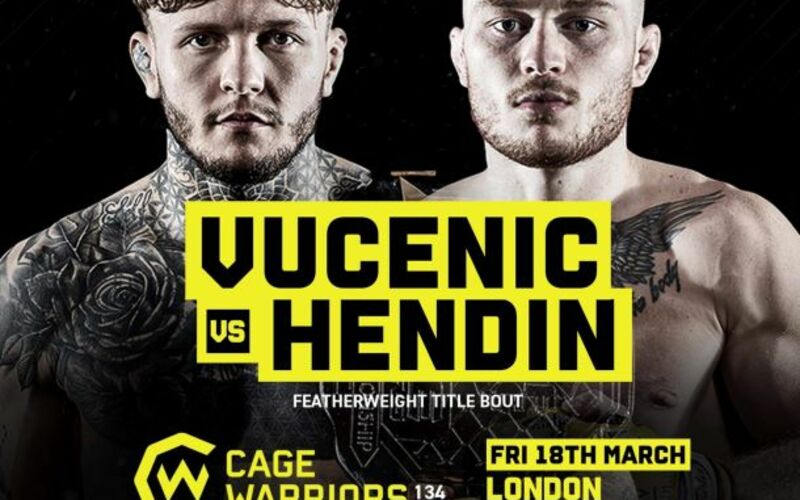 The Cage Warriors 134 main event between Jordan Vucenic (8-1) and James Hendin (6-1) will be for the Cage Warriors Featherweight Championship. Vucenic was originally scheduled for a rematch against Paul Hughes (8-1), with Vucenic winning their first fight by a close split decision back at Cage Warriors 119.  This most certainly will still be a match to make down the road as Hughes unfortunately was forced out of the rematch scheduled for this Friday due to a neck injury.

The 26 year old Vucenic, who fights out of England, is currently on a six-fight win streak culminating in winning the Cage Warriors featherweight belt in his last fight against Morgan Charriere (16-9-1) at Cage Warriors 122. Hendin, on the other hand, was previously scheduled to face Tobias Harila (9-2) following the withdrawal of his previous opponent, Steve Aimable (17-8). Hendin is coming off of a second round submission victory against Paull McBain (7-2). Hendin’s only professional loss came via unanimous decision against the previously-mentioned Hughes.

Elsewhere on the main card, middleweight Will Currie (6-2) is scheduled to face off against Patrick Vallèe (12-12-2). England’s Will Currie is most recently coming off of a first round triangle choke submission win back in late 2021. Five of Currie’s six wins have come by submission, so it can only be assumed that he will look to utilize his bread and butter against the veteran Vallèe.

Vallèe, who is 41 years old, is the most experienced fighter on this card. Vallèe debuted in 2003 and his first three fights ended in two draws and one no contest. Vallèe has lost 11 out of his last 16 professional bouts, but most of his most recent wins have come by finish, so Vallee does have a chance against the young British prospect.

In addition, George Hardwick (8-1) will be fighting Łukasz Kopera (10-6) in a lightweight bout. Hardwick has been on a four-fight win streak since 2019. The fighter out of the UK has also had three guillotine wins on his resume, so it might be worth looking out for. Kopera, on the other hand, is coming off of two straight losses and will be aiming to get back on the winning track this Friday.

Sweden’s Tobias Harila (9-2), who was originally scheduled to fight Hendin, is now rescheduled to fight Decky McAleenan (7-4-1). Harila, whose nickname is “Bad Intentions”, is well justified as the Swedish fighter has finished eight out of his nine wins, with most of finishes coming in the very first round. McAleenan is also a finisher, as he has finished his opponents in six out of his seven professional wins. Both fighters are coming off of losses, but it will be interesting to see how Harila performs seeing that he was original scheduled to face the current title challenger.

To kick off the main card, England’s Nik Bagley (2-0) will be facing off against Wales’ Ben Ellis (3-1) in a featherweight bout. Between the combined six professional bouts of the two fighters, only one fight has gone the distance. Fans should expect a banger between the two young prospects to start the main card on a high note on Friday.

On the Cage Warriors 134 prelims, Aidan James (5-2) will be fighting Kingsley Crawford (7-3) at bantamweight. Finally, to kickoff the prelims, England’s Lone’er Kavanaugh (2-0) who has one of the coolest names assumingly in the promotion will be fighting Wales’ Ryan Morgan (1-0).

Will Currie vs. Patrick Vallèe