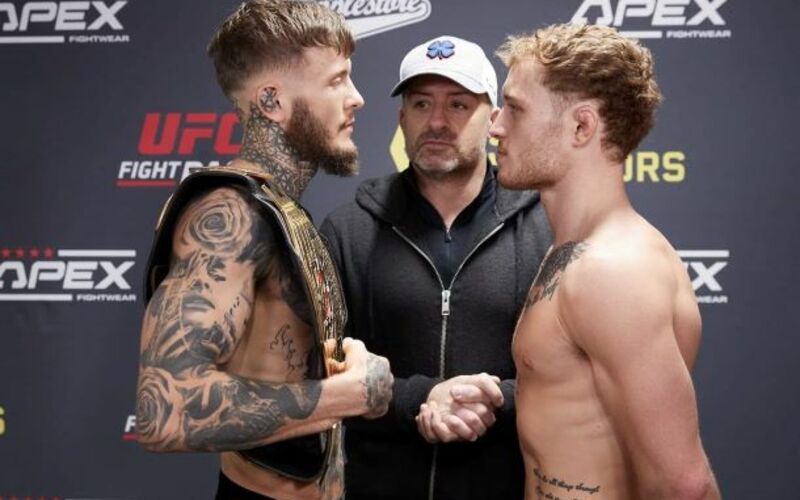 London is the place to be for MMA fans this weekend, hosting two major events on back-to-back nights in the O2 Arena. Before the UFC finally makes their big return to the UK on Saturday, Cage Warriors warms up the arena today with a featherweight title fight with Cage Warriors 134, and MMASucka has fans covered right here with live results.

While it was not the title unification bout against interim champion Paul Hughes that fans anticipated, champion Jordan Vucenic defends his title nonetheless. Stepping is “The Honeybadger” James Hendin of Sunderland, England.

Hendin was preparing to fight on the card against Tobias Harila, so while he is in fighting shape, he will have to potentially stretch his conditioning for two additional rounds. Hendin is still a worthy opponent to challenge for a title, going 5-1 for Cage Warriors and submitting Paull McBain in his most recent appearance.

Vucenic now has the opportunity to do what has slipped away from him in his last three fights- win convincingly. He might have had his hand raised against Steve Aimable, Paul Hughes, and Morgan Charriere, but the judges were divided in each decision. The 26 year-old is one of the top potential stars in Cage Warriors in an economy where champions and big names routinely flow to the UFC and Bellator.

George Hardwick has twice been scheduled to compete for Cage Warriors gold in the last few months, but instead fights newcomer Lukasz Kopera of Poland. Kopera is a veteran of the Russian promotion ACA, and if Hardwick is successful, it’s close to guaranteed that he’ll be one of the two men competing for the belt next.

Will Currie def. Patrick Vallee via TKO (Ground and Pound) at 2:56 of round 1

George Hardwick def. Lukasz Kopera via TKO (Knee and Punches) at 4:00 of round 2

Tobias Harila def. Decky McAleenan via TKO (Punches) at 1:55 of round 1

Kingsley Crawford def. Aidan James via Technical Submission (Anaconda Choke) at 1:28 of round 1

Lone’er Kavanagh def. Ryan Morgan via Knockout (Jab-Cross Combination) at 1:13 of round 3