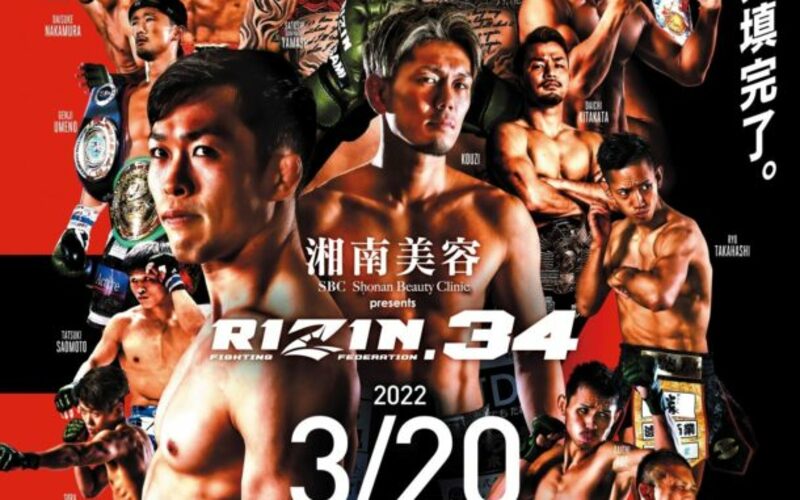 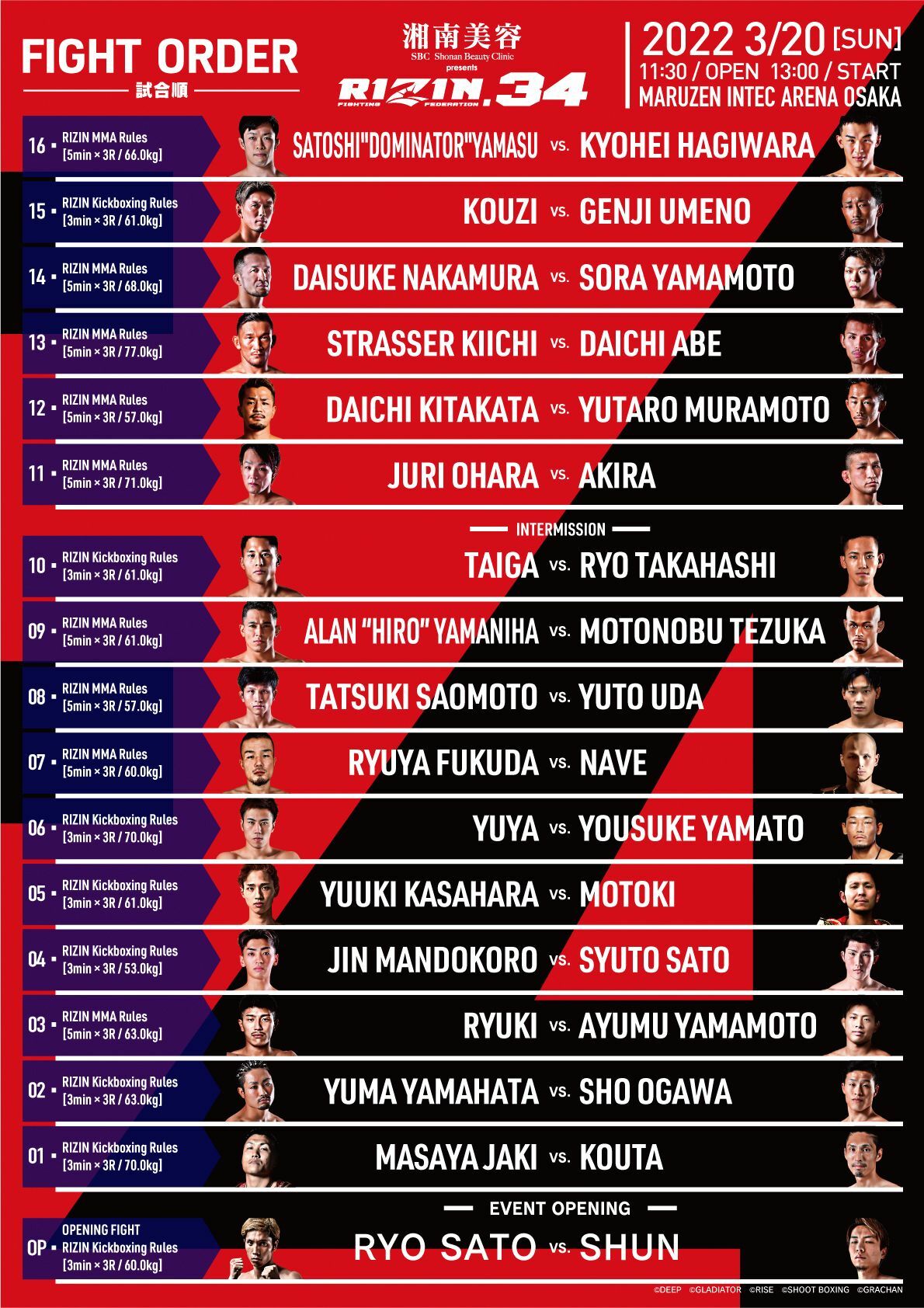 The numbered series of Rizin shows continues tonight with an astronomical 17 fights. Rizin 34 will go down at the Maruzen Intec Arena in Osaka. The show will feature mostly fighters from the Osaka and Kansai region. Stars from the region in MMA and kickboxing including Kyohei Hagiawara, Kouzi, Kiichi Kunimoto, and others will put their skills to the test in the number one MMA promotion in Japan. Rizin 34 will be available internationally with English commentary from Australian kickboxer Elliot Compton, Joe Ferraro, and Damien Brown on Live Now. We will look at some of the notable fights on the card. 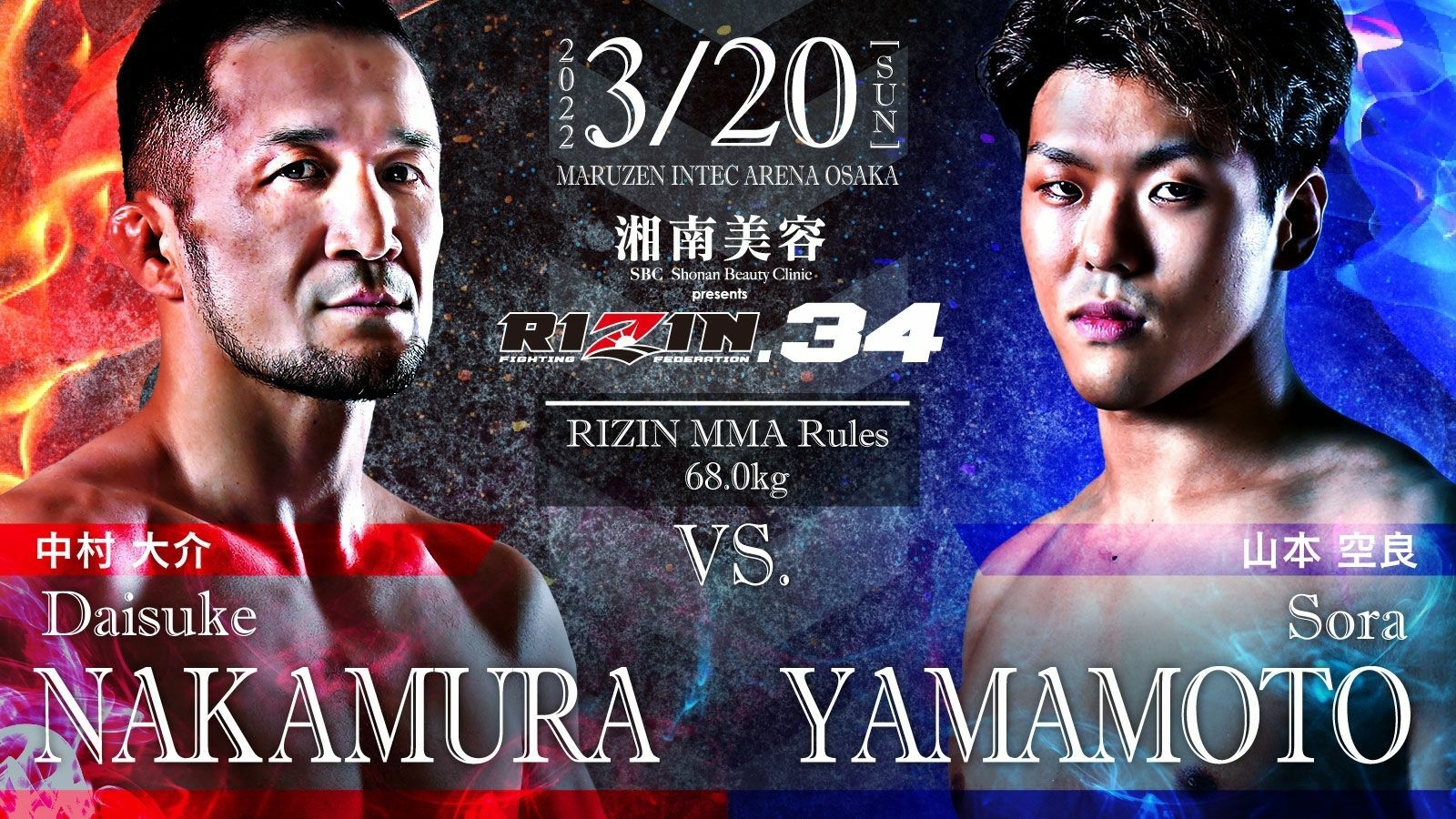 Daisuke Nakamura (32-20-1) has been fighting for almost 20 years as a pro. His first fight ever was a win against Shannon Ritch in Pride! A master of the armbar submission (he has 16 wins by an armbar variation), he is no longer just a submission guy. He has been knocking out and rocking opponents in the ring and cage. In his Rizin debut, he rocked Suguru Nii. Nii tried for an ill-advised takedown. Nakamura used Nii’s momentum against him and locked in an armbar for the win. As well Nakamura has a win over current Rizin featherweight champion Juntaro Ushiku in Deep. Nakamura is also a pro wrestler and when he started in pro wrestling, he was in the same promotion as his opponent’s father.

Sora Yamamoto (13-6-2) is an up-and-coming exciting fighter. He has finished all of his fights but one. He is the son of UFC Japan Middleweight Tournament Japan champion Kenichi Yamamoto. He is mainly a striker with extremely heavy hands. While his Rizin debut ended with a loss, he rebounded with a 35 second TKO win over Suguru Nii. 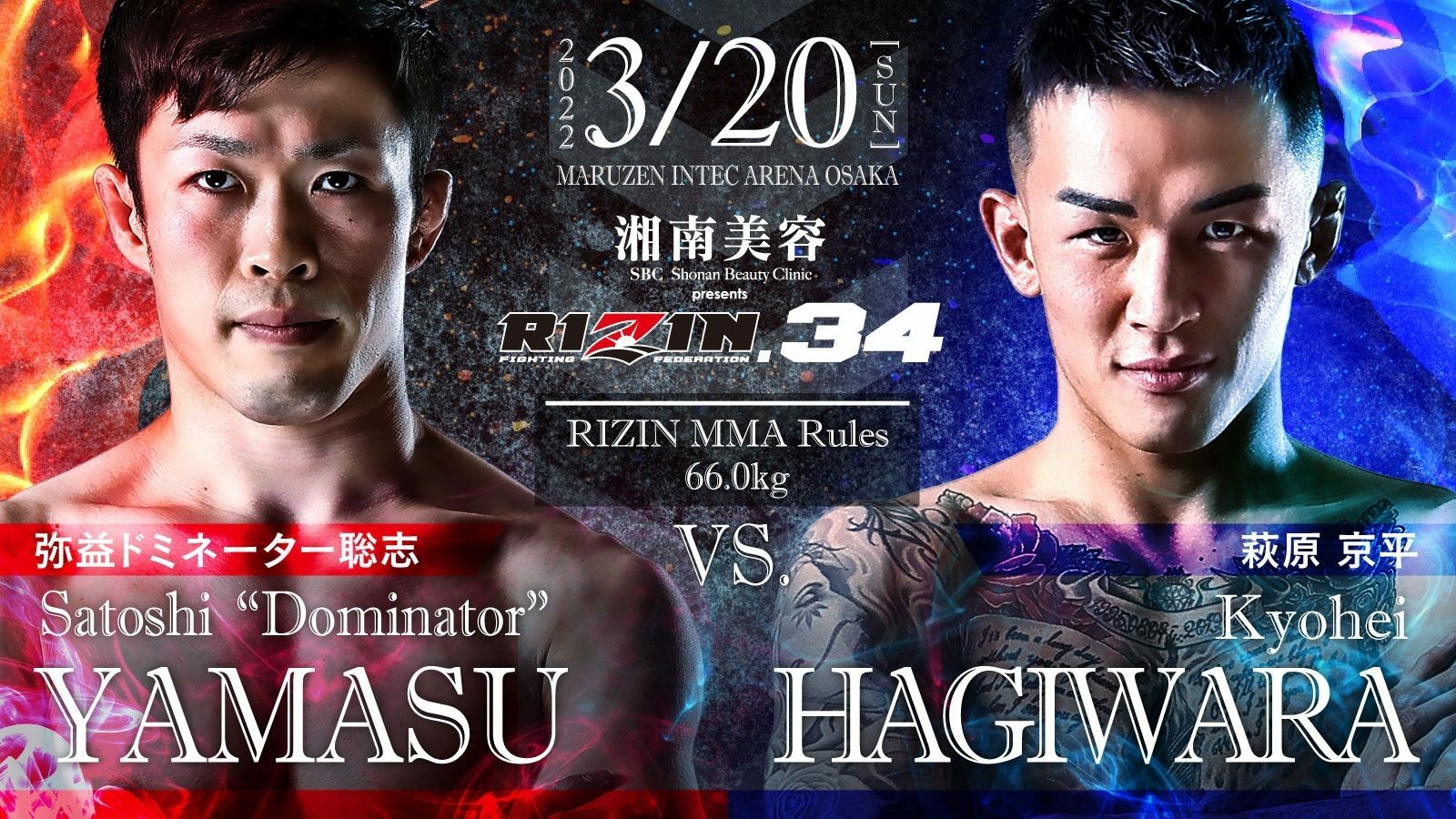 Satoshi “Dominator” Yamasu (12-6) is a former Deep featherweight champion who is most well-known for splitting his time between his day job and being a fighter. He is currently 1-1 in Rizin, with his most recent fight a very close split decision win over Rise kickboxing champion BeyNoah. He also has two wins over Takahiro Ashida. He usually comes into fights with an in-your-face relentless style that can overwhelm his opponents.

Kyohei Hagiwara (6-4) might be the greatest find for Rizin in the pandemic era for the promotion. Starting off with an under 500 record with no one knowing his name, he has become one of the promotion’s most popular fighters. The fighter from Smoker Gym certainly stands out among his peers due to his trash talking and numerous tattoos plastered over his body. An exciting fighter with a brawling style, he has brutal wins over Shoji, Ren Hiramoto, and Yojiro Uchimura. 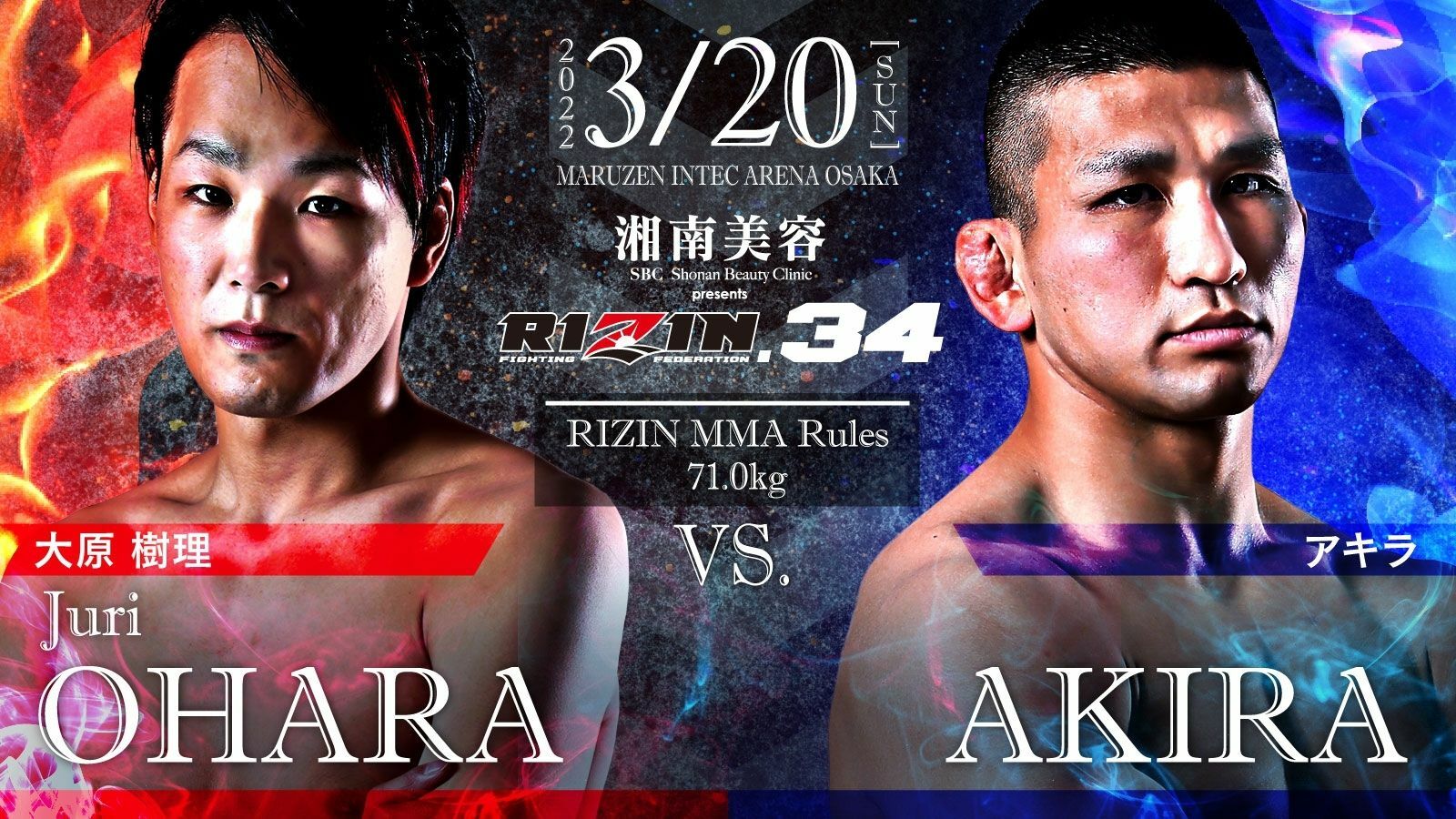 Juri Ohara (29-17-3) is one of the most violent fighters gracing the lightweight division in Rizin. With numerous knockout wins, he had an incredibly violent and bloody brawl with Yusuke Yachi in his Rizin debut and made quick work of Kohei Toekshi in his second fight for the promotion. He is not a fancy fighter who fights technical prowess. Every fight he is in is fought as if it is his last fight.

Akira (17-8-4) has earned the nickname “the gorilla” because of his incredibly muscular physique and his love of eating bananas. His Rizin debut was a great comeback submission win over Daichi Abe and a decision win over Takumi Suzuki. He is mainly a grappler and can manhandle his opponents with ease. If he gets his opponents down to the ground he can usually lock in a north-south choke with ease. 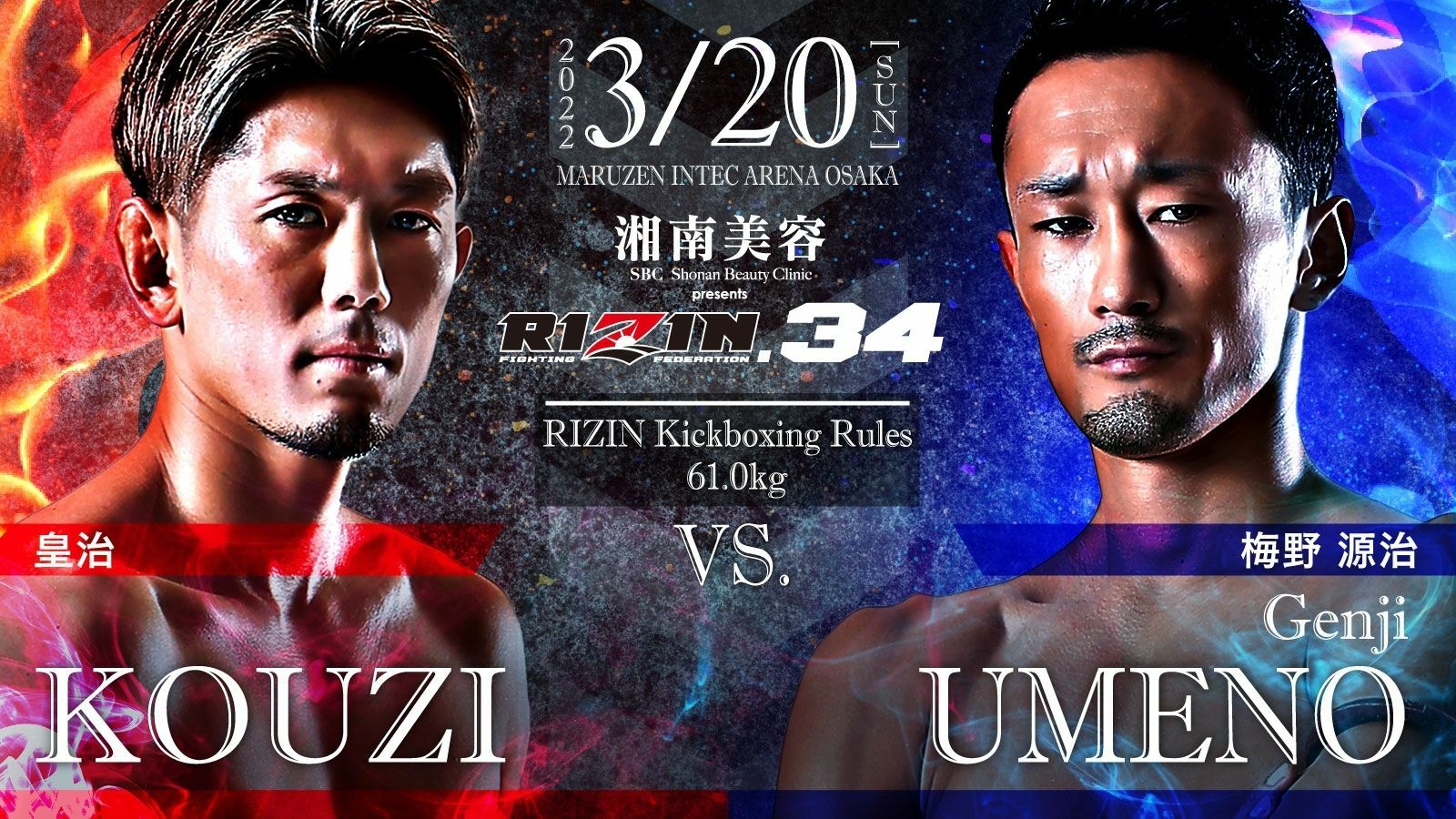 Kouzi and Genji Umeno meet again at Rizin 34. Hopefully this fight can end with a clear winner. Photo courtesy of Rizin FF.

The former K-1 fighter, Kouzi (29-16-2, 1 NC) hasn’t had the best Rizin run since joining the promotion. He has achieved only one win in kickboxing and that was against MMA fighter Kazuma Sone. Despite his disappointing run, he remains insanely popular usually drawing the most fans and crowd support.

Genji Umeno (47-13-4, 1 NC) is a veteran kickboxer and Muay Thai fighter. He is the 2016 Rajadamnern Stadium 135 lbs Champion and 2019 BOM Lightweight Champion. He and Kouzi met at Rizin 29 in a one-night kickboxing tournament. The fight barely got started when a headbutt clash rendered Umeno unable to compete. Despite the fight being ruled a no-contest Kouzi moved on to the finals of that tournament.

Check out our initial coverage of some of the Rizin 34 fights here.