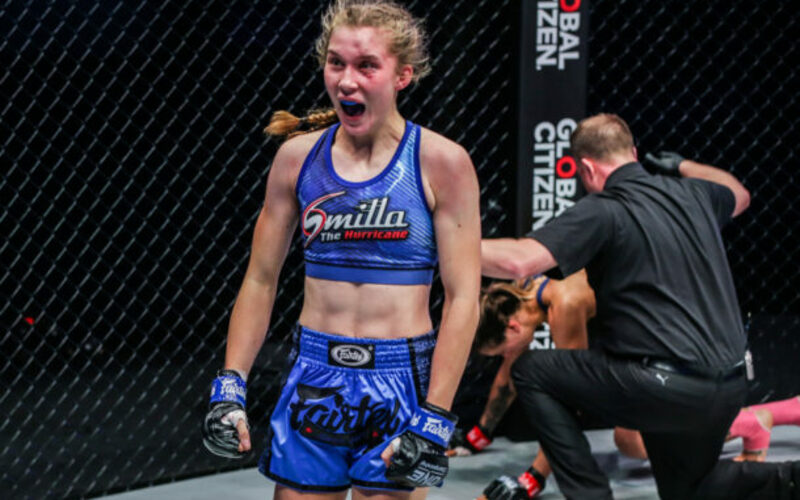 Smilla Sundell is setting out to stun the world on Friday, April 22, at ONE: Eersel vs. Sadikovic. The talented Swedish athlete will compete for the inaugural ONE Strawweight Muay Thai World Championship against Jackie Buntan.

Helping her prepare for the title opportunity is ONE Championship’s flyweight king Rodtang Jitmuangnon.

Sundell posted a short clip of the two sparring at Fairtex Gym. Undoubtedly, there is much the rising star can learn from “The Iron Man.” The ONE Flyweight Muay Thai World Champion utilizes relentless forward pressure to break his opponents, and Sundell did the same in her ONE debut against Diandra Martin.

But Sundell gets elite training at one of the world’s top Muay Thai training centers. She trains alongside a who’s who in the sport, including Stamp Fairtex and Saemapetch Fairtex.

And stepping inside the ring against a man is not uncommon territory for Sundell. In 2021, Sundell competed on a local Fairtex card against a male teenager, who was the only available opponent for her.

The Swedish talent won with a first-round body blow.

Sundell will need all to absorb all of the knowledge she can if she intends to make history as the youngest champion in ONE history. Buntan has been on a tear since joining the global stage and is a perfect 3-0 in ONE competition. The American has already notched a win over a Fairtex Gym opponent and understands how to combat their style.

The title tilt, scheduled for five rounds, will test her mettle and give her a platform to establish her star as the brightest in the world.

She’ll get her shot to bring another World Championship back to Fairtex on April 22.