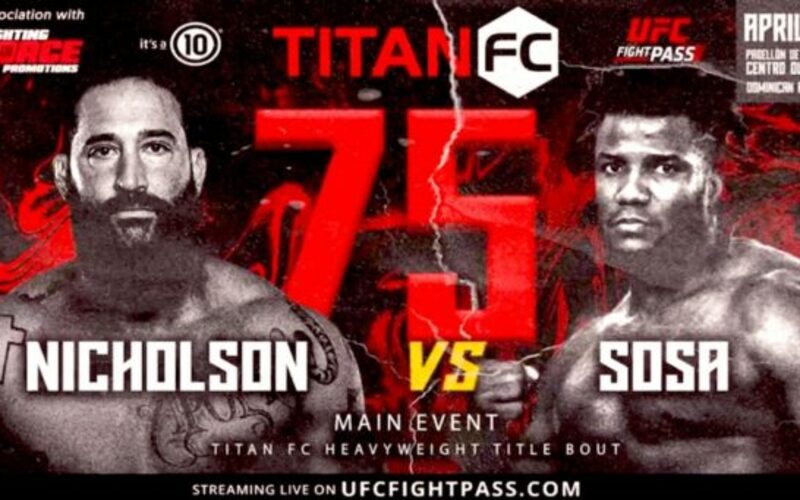 Titan Fighting Championships makes its return this Sunday, April 10 for a very special show in conjunction with Dominican Republic-based Fighting Force Promotions in Santo Domingo. The show will feature three championship bouts on a seven-fight main card and a four-fight preliminary card for 11 fights in all.

The show will be headlined by a kickboxing match between MMA veteran Alex Nicholson (14-9) and local fan favorite Oscar Sosa (14-2) that will be contested for the vacant Titan FC heavyweight kickboxing championship.

Nicholson has logged cage time in the UFC and PFL but opted to spend his 2021 fighting bare-knuckle for Jorge Masvidal‘s Gamebred Fighting Championships. The 31-year-old fighting out of  UFC Gym Winter Springs went 2-0 during his brief spell in bare-knuckle, recording first-round knockouts in both fights. A kickboxing specialist, Nicholson will now take the first professional kickboxing fight of his career against Sosa, a Dominican fighter who also has 14 wins to his name. Sosa is coming off a kickboxing win over Luis Mendez at Titan FC 69, a fight which he won by way of unanimous decision. As an MMA fighter, Sosa has recorded finishes in at least half of his 14 wins.

Quiñones, an American who spends his days’ training at Sanford MMA, has spent the majority of his career inside the Titan FC cage. Four of his five wins have come by way of stoppage, with his latest victory Geralbert Castillo coming by way of unanimous decision. He’ll get to trade leather with another local favorite in “Tiki” Acevedo, who is coming off a doctor stoppage victory over Benjamin Jiron Molina at Fighting Force 7 back in November 2021. Sunday will be Acevedo’s third time in the Titan FC cage, and he’ll look to make his mark as one of the top Dominican prospects in MMA today.

The third title fight of the night will feature Matos, a Dominican fighter who just had his 8-0 unbeaten record snapped at the hands of rising American Dilano Taylor, taking on his countryman in Santos for the Dominican promotion’s welterweight crown. Santos will enter Sunday’s fight on a two-fight winning streak with the most recent of his wins coming by way of first-round heel hook at Fighting Force 7.