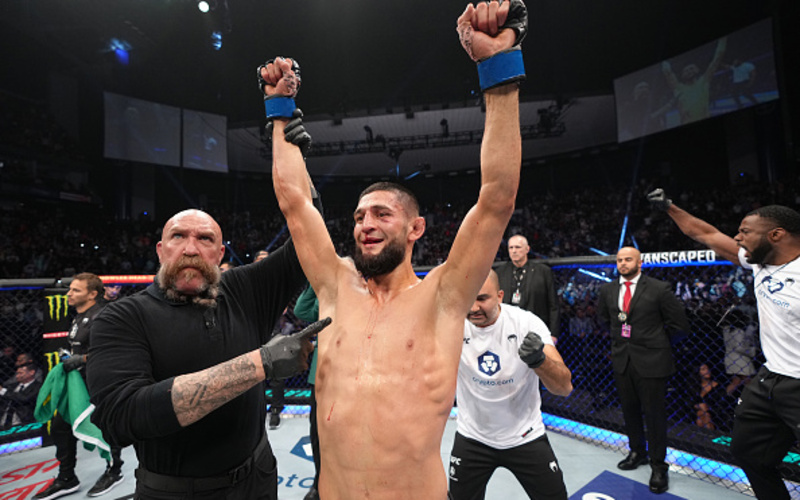 Adversity, the single main component for a good fighter to become a great fighter. The quintessential ingredient in sorting those who wilt under the pressure of high level opposition and those who prevail regardless of how imposing a task they face. At UFC 273, Khamzat Chimaev had his first taste of this foreign factor of elite MMA, when he went up against former title challenger Gilbert Burns. Was Khamzat Chimaev exposed or will he be a future Champion?

Khamzat vs Burns: No Longer Invincible

For his short career in the UFC, Khamzat Chimaev has been a force of nature, receiving little to no damage and imposing his will on any man in his way. The undefeated phenom looked near invincible, snatching wins over talented fighters with his relentless wrestling and heavy hands.

His success, whilst spectacular, has presented a polarizing topic amongst fans. Some pinning him to continue his dominant rise to defeat both Kamaru Usman and Israel Adesanya in the same devastating fashion. Others believing him to be the latest UFC money maker, with hand picked opponents specifically catered for his skill set. However, when the bout between Khamzat Chimaev and Gilbert Burns was announced, the truth surrounding Chimaev was inevitable. The question as to whether ‘Borz’ was a future champion or another hype job ready to be exposed was going to be answered.

Excitement rushed the arena as the lights dimmed in anticipation for the men to make their respective walks to the Octagon. The showdown between the UFC’s hottest star Khamzat Chimaev and Gilbert Burns was about to come to a head.

Round 1 was explosive as Khamzat forced the ADCC bronze medalist to the ground. Unlike most of Khamzat’s opponents, Burns was quickly back up to his feet (Chimaev even stated post-fight that he was surprised by the strength of Burns). The fight continued on the feet with Khamzat seemingly reluctant to attempt to engage in a grappling competition with the BJJ ace. With both having success with their boxing, it was Chimaev who landed more effectively, landing a stiff south paw jab to drop Gilbert Burns. Pouncing on his prey, ‘Borz’ landed some heavy ground and pound, and even managed to cut Burns on the forehead with a vicious slashing elbow. With the closing of the round, the momentum seemed on Chimaev’s side.

Round 2 continued the theme of the first, with Burns looking fresh and un-phased by the last round. Going tit-for-tat the two warriors battled it out on the feet, until Burns landed his thunderous trademark left-hook, momentarily dropping the seemingly invincible Chimaev. Once recovered, the tide shifted briefly for Chimaev, who rocked Burns; only to get dropped once again. With Chimaev rallying with an instinctive takedown to neutralize the inevitable damage. The round ended with Burns kicking off a tired Chimaev after the bell, and Khamzat swiping at the grounded Burns.

With the prior rounds post-bell hostilities and both men winning a round each, the third round started off at a high pace. A determined Burns looked for a takedown of his own to utilize his world class BJJ, but Chimaev showcased some impressive takedown defense. The round was much like the first two, with each man having their moment in a battle for the final round. Chimaev was finding the mark slightly more often, but had his chin tested by Burns on multiple occasions.

After a wild flurry capped off the end of the round, the energized crowd sat in suspense as the judges tallied the score. A deflated Chimaev gained favor with the judges, earning the unanimous decision victory.

The takeaway from his war with Burns, should not be that Khamzat Chimaev was exposed. On the contrary, he just defeated a former title contender and the #2 ranked welterweight in the world. Whilst a milestone achievement for most, Chimaev’s noteriety within the MMA community has caused his victory to be somewhat overlooked, which is a disservice to both Chimaev and Burns. Considering this, Chimaev still has holes in his game that would prevent him from achieving championship status.

The first downfall to Chimaev’s game was his lack of striking defense. He has little to no head movement, opting to use a high guard and an active lead hand to block and parry most incoming strikes. If faced with a high level striker with the necessary takedown defense to keep it standing; he will simply get picked apart.

Secondly, the Chechen-born Swedish mixed martial artist has some brawler tendencies which got him caught in the fire fight on multiple occasions—a bad habit especially when facing a power house like Gilbert Burns and Kamaru Usman.  Chimaev found much more success when he kept his composure and picked his shots carefully. He also tried to get Burns out of there too quick, actively searching for the finish that was not there.

His relentless wrestling style, alongside some improved striking and a different approach to fighting the very best in his division will give him a good chance of becoming a future champion. However, the man at the top is far from an easy task. Kamaru Usman is the current pound for pound king for a reason, it would be wise to gain more experience fighting the best before challenging for the belt.

Usman’s greatest rival to date is Colby Covington. Controversial and brash, the highly talented former Interim WW champion has given the current champ his hardest fights, and would be the perfect next step on Khamzat Chimaev’s climb to the top.

Both smothering wrestlers, its likely they will neutralize each others grappling for the most part. Which again, will give Chimaev the chance to hone his striking skills in the field.

Covington lacks power, preferring to utilize his superior endurance to grind out the win. Chimaev endured the incredibly powerful shots of Burns and has the wrestling to hold his own. If he can tighten up his defense and keep composed, whilst landing big and often Chimaev could earn a potential finish.

However, once his most effective weapon, his main weakness against Covington may be his relentless nature and brawler tendencies when his opponent’s will will not give in. If Covington is able to endure the onslaught, Covington will put a hellacious pace on Chimaev; who looked tired in his fight three round fight with Burns.

Will Khamzat Chimaev be a Future Champion?

The Khamzat Chimaev bandwagon is still alive and well, in fact, the turbocharge has kicked in.  The only thing that got ‘exposed’ were some very fixable weaknesses, which if he solves as well as adapts to the elite level fighters of his division, he may very well be the future champion of the welterweight division.

Life long martial artist and fan of combat sports, currently competing as an amateur Muay Thai fighter. Besides fighting, I love travelling the world and writing.