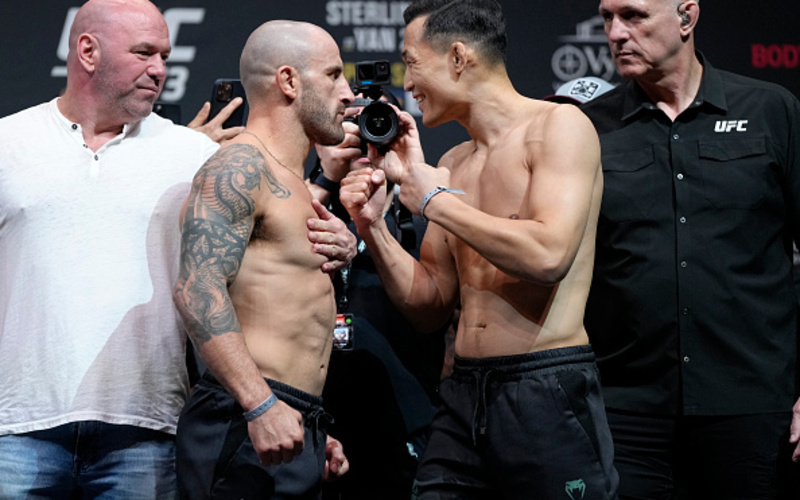 The UFC‘s featherweight and bantamweight titles will be on the line in Jacksonville, Florida on Saturday as MMASucka brings you live results from UFC 273. The main event of the night will feature a featherweight title fight as Alexander Volkanovski attempts to defend his title for the third time as he faces “The Korean Zombie” Chan Sung Jung. In Saturday’s co-main event, the bantamweight title will be on the line during the long awaited rematch between bantamweight champion Aljamain Sterling and interim champion Petr Yan.

Prior to being scheduled to face “The Korean Zombie,” Volkanovski’s third title defense was originally scheduled to happen last month at UFC 272. He was scheduled to face the man he took the title from, Max Holloway, however Holloway was injured and forced out of the fight just days after it was announced. Instead, Volkanovski got matched up with Zombie and the two were scheduled for Saturday’s main event.

Entering Saturday night, Alexander Volkanovski is undefeated during his time with the UFC, dating back to his debut in 2016, with a record of 10-0. Overall, Volkanovski holds a record of 23-1 as he has not lost since 2013, winning his last twenty in a row since that one loss. Volkanovksi earned his title shot in 2019 with a unanimous decision win over former featherweight champion Jose Aldo at UFC 237.

In his next fight, Volkanovski faced the champion, Max Holloway, at UFC 245 and captured the title that night, defeating Holloway by unanimous decision. After that fight, the pair were booked for an immediate rematch as their first fight was very close. Volkanovski and Holloway met again at UFC 251 and fought all five rounds once again in what seemed like an even closer fight. When the winner was announced, Volkanovski had retained his title, defeating Holloway once again, this time by split decision.

Volkanovski’s most recent fight was against Brian Ortega after the two coached on The Ultimate Fighter against each other. When the season was over, Volkanovski and Ortega met at UFC 266 where Volkanovski was able to successfully defend his title for the second time, defeating Ortega by unanimous decision. As he looks to defend his title for the third time, it will be no easy task as he takes on a tough opponent.

Since the end of his military service in South Korea in 2017, Chan Sung Jung, better known as The Korean Zombie, has compiled a record of 4-2. In his first fight back, he knocked out Dennis Bermudez in round one of their main event at UFC Fight Night 104. Jung then suffered a very disappointing loss in his next fight as he was finished during the final second of his fight against Yair Rodriguez at UFC Fight Night 139.

After that loss, Jung went on to win his next two fights in a row starting with a TKO win in under a minute against Renato Moicano in the main event of UFC Fight Night 154. The next win was another first round TKO finish as he defeated former UFC lightweight champion Frankie Edgar in their main event at UFC Fight Night 165.

Inching closer to a title shot coming off those two wins, Jung was matched up with Brian Ortega in his next fight at UFC Fight Night 180. Unfortunately, Jung’s win streak was snapped in that fight as Ortega would go on to win by unanimous decision. In his most recent outing, Jung bounced back with a win over Dan Ige by unanimous decision during their main event meeting at UFC Vegas 29. After missing his chance at a title shot in his fight with Ortega, Jung looks to make the most of the position he is in now following Holloway’s injury as he has been granted a title shot that was maybe still one or two wins away.

In Saturday’s co-main event, another title will be on the line as Aljamain Sterling and Petr Yan finally meet once again with the bantamweight title up for grabs. It has been just over a year since these two first met at UFC 259 where Sterling challenged the champion, Petr Yan, for the belt. It was in the fourth round that Yan landed the illegal knee that everyone remembers, forcing him to lose by disqualification, granting Sterling the championship win. Now they meet again to settle it once and for all.

Since the first fight went down, Sterling has not made an appearance. A rematch was scheduled for soon after their first fight however Sterling was forced out of that fight because of problems he was having with his neck following a procedure. Prior to his first fight with Yan however, Sterling had put together five straight wins. This win streak included three unanimous decision wins over Brett Johns, Jimmie Rivera and Pedro Munhoz. In between the decision wins over Johns and Rivera, Sterling picked up a second round submission win over Cody Stamann at UFC 228. The fifth and final win during that stretch was another submission win to earn him the title shot, submitting Corey Sandhagen at UFC 250.

Yan, on the other hand, has made an appearance since the first fight between him and Sterling. On the night he and Sterling was scheduled for the rematch, he instead ended up facing off against Sandhagen for the interim title following Sterling’s withdrawal. Yan went on to win that fight by unanimous decision after an exciting fight, solidifying himself as the top contender. Prior to that win and the loss against Sterling, Yan had been undefeated in the UFC holding a record of 7-0 since he made his debut in 2018. In his last two fights before meeting Sterling, Yan finished Urijah Faber by knockout at UFC 245 to set up a vacant title matchup with Jose Aldo at UFC 251 in which Yan also finished by TKO to win the belt.

Kicking off UFC 273’s main card will be a fight in the lightweight division as Vinc Pichel takes on Mark Madsen. Pichel will be entering the fight on a three fight win streak with back-to-back-to-back unanimous decision wins over Roosevelt Roberts, Jim Miller and Austin Hubbard. Madsen will be entering the fight with an undefeated record of 11-0, with three of those coming since he joined the UFC in 2019. Since then, he has picked up a TKO win over Danillo Belluardo in his debut, followed by back-to-back decision wins over Austin Hubbard and Clay Guida.

Following that fight will be a fight in the women’s strawweight division as Mackenzie Dern faces off against Tecia Torres. Dern will be entering the fight coming off a loss that snapped a four fight win streak. The loss happened during Dern’s first UFC main event as Marina Rodriguez defeated her by unanimous decision at UFC Vegas 39. As for Torres, she has won he last three in a row with a UD win over Brianna Van Buren at UFC on ESPN 11, a TKO win over Sam Hughes at UFC 256, and in her most recent fight, another UD win over Angela Hill at UFC 265.

Finally, before the title fights start in the co-main event will be a very good matchup in the welterweight division as former title challenger Gilbert Burns faces Khamzat Chimaev. Since his unsuccessful attempt at taking the title from Kamaru Usman last year, Burns has made one appearance. In that fight, he was able to bounce back with a win as he defeated Stephen Thompson by unanimous decision at UFC 264. Chimaev will be entering the fight undefeated at 10-0, 4-0 since he joined the UFC in 2020. He has finished every fight he has been in as he submitted John Phillips in his debut, TKO’d Rhys McKee after that, knocked out Gerald Meerschaert following that, and then finally in his most recent fight, submitting Li Jingliang.

Follow along with MMASucka as we provide you with UFC 273 Results throughout the card.