Live from the Apex again in Las Vegas, UFC on ESPN 11 features a heavyweight matchup in the main event. Since the beginning of 2017, Curtis Blaydes has only been defeated once, holding a record of 7-1, 1NC. That one loss came to Francis Ngannou during their rematch at UFC Fight Night 141. Since then, he has won his last three straight fights. His win streak kicked off with a unanimous decision win over Justin Willis at UFC Fight Night 148.

He would then go on to face Shamil Abdurakhimov and defeat him by round two TKO at UFC 242. In his most recent outing, Blaydes took on former UFC heavyweight champion Junior dos Santos in the main event of UFC Fight Night 166. He would win in the second round, finishing the former champion by TKO. With Ngannou waiting in the shadows for a title shot, a win for Blaydes could put him one more win away from his chance at gold.

Standing across from him will be former Bellator heavyweight champion Alexander Volkov. Since making his UFC debut in 2016, Volkov has put together a record of 5-1. His one loss came at UFC 229 against Derrick Lewis in a fight he was winning until Lewis finished him in the final moments. His first two wins inside the octagon came by decision. The first of those came in his debut at UFC Fight Night 99 when he defeated Timothy Johnson by split decision.

His second outing in the UFC came at UFC on Fox 24 when he faced MMA veteran Roy Nelson. He would go on to defeat Nelson, winning by unanimous decision. In his next two outings, Volkov picked up his first finishes inside the octagon. The first of those was a TKO win over Stefan Struve. Volkov would then go on to face former heavyweight champion Fabricio Werdum, finishing him by knockout in round four. In his most recent outing, Volkov defeated Greg Hardy by unanimous decision at UFC Fight Night 163.

In the co-main event, Josh Emmett makes his return to the cage as he takes on Shane Burgos. Emmett has not fought since last summer when he took on Mirsad Bektic at UFC Fight Night 155. He would defeat Bektic in the first round, finishing him by TKO for his second straight win. Prior to that, he had defeated Michael Johnson by third round knockout at UFC on ESPN 2. As for Burgos, he has won his last three straight starting with a submission win over Kurt Holobaugh at UFC 230. He followed that up with a split decision win over MMA veteran Cub Swanson at UFC Fight Night 151. Finally, in his most recent outing, Burgos defeated Makwan Amirkhani by third round TKO at UFC 244. A win for either pushes them closer and closer to the top five of the featherweight division.

Kicking off the main card will be a catchweight fight at 160 pounds as Jim Miller takes on Roosevelt Roberts. Miller’s last fight took place in February when he lost to Scott Holtzman by unanimous decision. As for Roberts, he last competed less than a month ago as he defeated Brok Weaver by submission at UFC on ESPN 9.

Following that fight will be a welterweight fight as Belal Muhammad faces off against Lyman Good. Muhammad enters the fight off two straight wins, most recently defeating Takashi Sato by submission. Good enters the contest coming off a TKO win over Chance Rencountre at UFC 244.

Finally, before the co-main event will be a women’s bantamweight bout as former title challenger Raquel Pennington takes on Marion Reneau. Pennington is coming off a unanimous decision loss to Holly Holm. Her opponent, Reneau, enters the contest coming off two straight losses to Cat Zingano and Yana Kunitskaya.

Follow along with MMASucka as we provide you with the results throughout UFC on ESPN 11.

*Camacho missed weight at 158 pounds, he will give up 20 percent of his purse 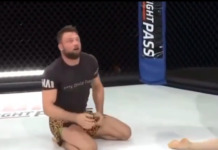