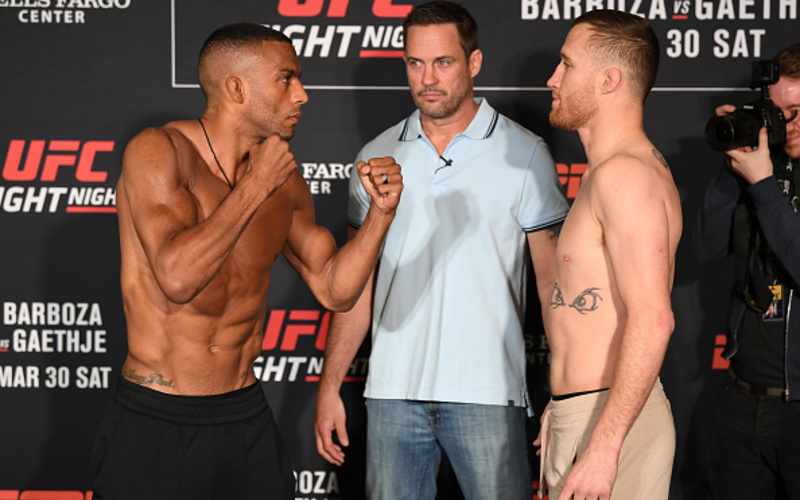 The UFC travels to Philadelphia for the third time for UFC on ESPN 2. The main event will feature a lightweight fight between two exciting fighters, Edson Barboza and Justin Gaethje. Both fighters will be entering the fight coming off a KO/TKO finish. For Barboza, it came at UFC on Fox 31 when he put on a striking clinic against Dan Hooker that would end in the third round after a hard blow to the body from Barboza. Gaethje’s win came at UFC Fight Night 135 when he knocked James Vick out cold in round one.

In the co-main event, former WSOF middleweight and light heavyweight champion, David Branch will take on Jack Hermansson. Branch will be looking to rebound from his first round knockout loss to Jared Cannonier last November. Hermansson, on the other hand, will look to pick up a big win for his third straight.

Also, before the co-main event, Josh Emmett will return from the brutal injuries he suffered last year at the hands of Jeremy Stephens, to face Michael Johnson.

Kicking off the main card will be a featherweight fight between Sodiq Yusuff and Sheymon Moraes. Following that fight will be a light heavyweight bout between Kennedy Nzechukwu and Paul Craig. The third fight on the main card will feature women’s strawweights, Karolina Kowalkiewicz and Michelle Waterson.

Follow along with MMASucka as we provide you with the results throughout UFC on ESPN 2.

Justin Gaethje def. Edson Barboza via Knockout (Punch) at 2:30 of Round One
Jack Hermansson def. David Branch via Submission (Guillotine) at 0:49 of Round One
Josh Emmett def. Michael Johnson via Knockout (Punch) at 4:14 of Round Three
Michelle Waterson def. Karolina Kowalkiewicz via Unanimous Decision (30-27, 30-27, 30-27)
Paul Craig def. Kennedy Nzechukwu via Submission (Triangle Choke) at 4:20 of Round Three
Sodiq Yusuff def. Sheymon Moraes via Unanimous Decision (29-27, 29-28, 29-28)

*Borg missed weight at 137.75 lbs and will forfeit 20 percent of his fight purse to his opponent