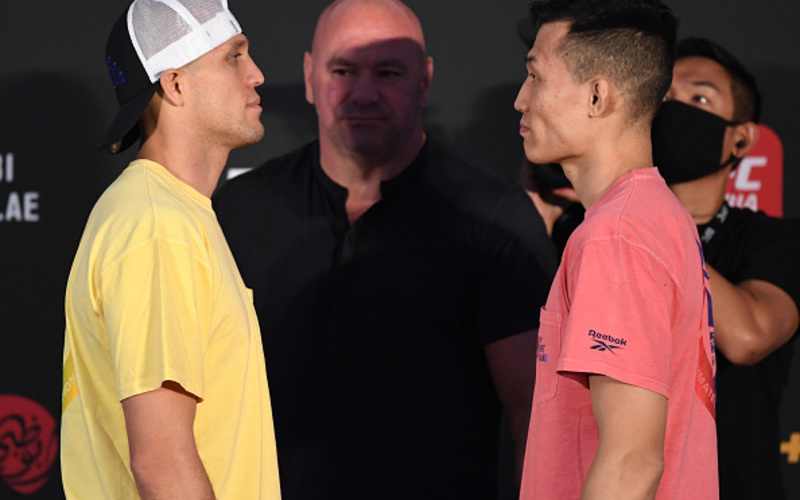 After nearly a year of stirring up a rivalry, Brian Ortega and Chan Sung Jung finally meet and we will provide UFC Fight Night 180 results all night. The pair of featherweights were originally scheduled to meet at UFC Fight Night 165 last December. However, Ortega was forced to withdraw from the fight due to an injury. Instead, Jung would end up facing former UFC lightweight champion Frankie Edgar that night. He ended up winning as he finished Edgar in the first round by TKO. Both Jung and Ortega had already gone back and forth on social media but the rivalry really kicked off in March. At UFC 248, Ortega ended up getting into an altercation with a Korean pop singer Jay Park. He also happened to be Jung’s co-manager, close friend, and sometimes interpreter. The altercation involved Ortega confronting Park and slapping him.

Ortega and Jung will now settle their rivalry in the main event of UFC Fight Night 180. UFC president Dana White has also recently stated that the winner will earn a title shot. Ortega has not fought since he earned his last title shot. That fight was at UFC 231 as he faced then-champion Max Holloway. He ended up losing the fight after the fourth round as the doctor was forced to call for the fight to stop. Prior to that, Ortega was undefeated with a record of 14-0, 1NC. Some of his more notable wins came against Frankie Edgar, Cub Swanson and Renato Moicano. As for Jung, he returned from mandatory military service in 2017 and has gone 3-1 since. The one loss he suffered was against Yair Rodriguez as he has picked up KO/TKO wins over Dennis Bermudez, Moicano and Edgar.

In the co-main event, former UFC strawweight champion Jessica Andrade is moving up to the flyweight division. She will be facing off against number one contender and former title challenger Katlyn Chookagian. Chookagian faced the champion Valentina Shevchenko earlier this year at UFC 247. She would end up losing by TKO in the third round. After that, she faced Shevchenko’s sister, Antonina Shevchenko, at UFC on ESPN 9. She would end up winning that fight as she defeated Shevchenko by unanimous decision. As for Andrade, she won the 115-pound title against Rose Namajunas at UFC 237. She would end up losing it in her first defense in under a minute as Weili Zhang finished her by TKO at UFC Fight Night 157. Andrade dropped her second straight loss after that as Namajunas defeated her by split decision at UFC 251. She now looks to earn a potential title shot in a new division if she picks up a big win over Chookagian.

Kicking off the main card will be a featherweight fight as Thomas Almeida makes his return to the cage to face Jonathan Martinez. Almeida has not fought since 2018 as he has lost his last two straight. As for Martinez, he is coming off a TKO win over Frankie Saenz. Following that fight will be a welterweight fight as Claudio Silva takes on James Krause. Krause steps into the fight on just a couple week’s notice as he is coming off a loss to Trevin Giles. Meanwhile, Silva has not lost since his first pro outing, winning his last fourteen straight. Finally, before the co-main event will be a light heavyweight fight between Jimmy Crute and Modestas Bukauskas. Crute’s last fight was a first round submission win while Bukauskas has won his last seven straight.

Follow along with MMASucka as we provide you with the results throughout UFC Fight Night 180.