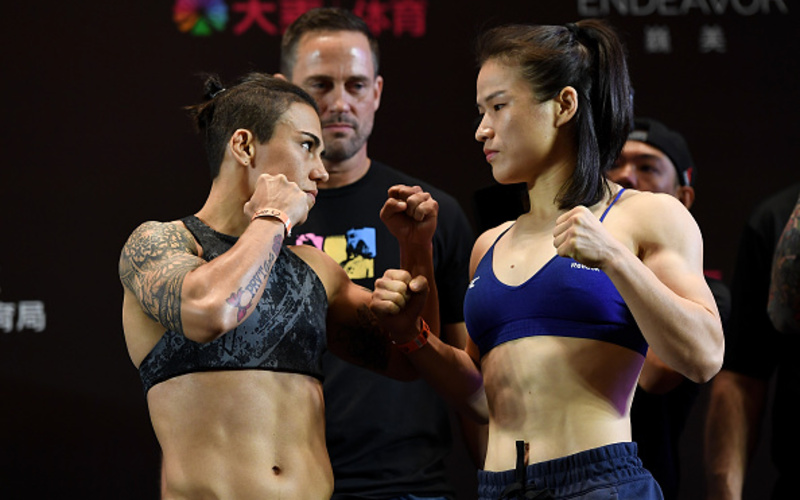 The UFC makes its return to China for the first time this year as they travel to Shenzhen, but this time a belt will be on the line. In the main event of UFC Fight Night 157, UFC strawweight champion, Jessica Andrade, looks to defend her belt for the first time. She won it three months ago as she finished the former champion, Rose Namajunas, by second round knockout. Her first title defense comes against China’s own, Weili Zhang. The sixth ranked strawweight contender enters the bout on a nineteen fight win streak with three UFC wins under her belt. Her most notable win came in her most recent outing as she outclassed Tecia Torres at UFC 235. If Zhang were to win, she would become China’s first ever UFC champion.

In the co-main event, two highly talented welterweight prospects face off in what promises to be an exciting fight. Another representative of China, Li Jingliang, will take on Brazilian standout, Elizeu Zaleski dos Santos. Both men enter the fight coming off consecutive wins as Jingliang has won his last two straight and dos Santos his last seven. Jingliang’s last fight came in the UFC’s last visit to China in 2018 when he finished David Zawada in the third round of their UFC Fight Night 141 bout. Dos Santos is coming off a recent finish as well as he submitted Curtis Millender in the first round of their fight at UFC Fight Night 146.

Kicking off the main card will be a fight in the women’s flyweight division between Wu Yanan and Mizuki Inoue. Following that fight will be a welterweight bout as Song Kenan looks to rebound from a recent loss as he takes on Derrick Krantz, who is also coming off a recent defeat. Finally, before the co-main event, TUF 24 alum, Kai Kara-France brings a seven fight win streak into the octagon as he faces Mark De La Rosa.

Follow along with MMASucka as we provide you with the results throughout UFC Fight Night 157.

*Yanan missed wight, at 129 pounds, and has been fined 30 percent of her purse