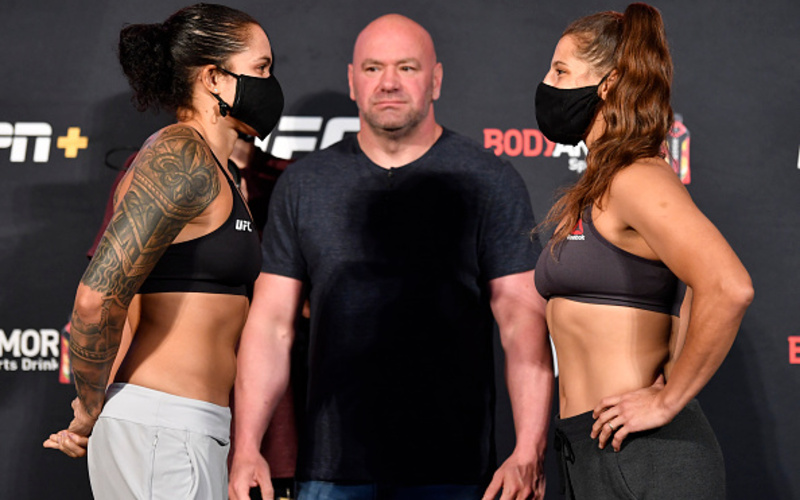 Spencer made her debut in the UFC after winning the vacant Invicta FC featherweight title. She did that by submitting Pam Sorenson in the fourth round. In her first fight in the UFC, she took on another former Invicta FC featherweight champion Megan Anderson. She picked up a huge win that night as he submitted Anderson in the first round. The win would earn her a fight with the former UFC featherweight champion Cris Cyborg. A win would surely earn Spencer a title shot, however, she would lose the fight by unanimous decision.

Standing across from her will be the first and only double champion in women’s history Amanda Nunes. Nunes won her bantamweight title first, defeating Miesha Tate for it at UFC 200. Her first title defense came against former bantamweight champion Ronda Rousey as she defeated her in less than a minute by TKO. Nunes would then go on to defend he 135-pound title two more times with a decision win over Valentina Shevchenko and a TKO win over Raquel Pennington. She would then move up to 145-pounds where she met the champion Cris Cyborg at UFC 232. She shocked everyone that night, knocking Cyborg out in just fifty seconds. However, she has not returned to 145 since instead picking up two more defenses over Holly Holm and Germaine de Randamie at 135.

In the co-main event, Cody Garbrandt looks to bounce back from three straight losses. Taking him on will be Raphael Assuncao as he will also be looking to snap a losing streak. Garbrandt has not won a fight since 2016 when he won the bantamweight title with a UD win over Dominick Cruz. Since then he has lost twice to T.J. Dillashaw and, in his most recent fight, lost to Pedro Munhoz. All three of those losses, unfortunately, came by way of KO/TKO. As for Assuncao, his last win came in 2018 when he defeated Rob Font by unanimous decision to make it four wins in a row. But then he would go on to lose by submission to future title challenger Marlon Moraes and by a decision to Cory Sandhagen.

Follow along with MMASucka as we provide you with the results throughout UFC 250.