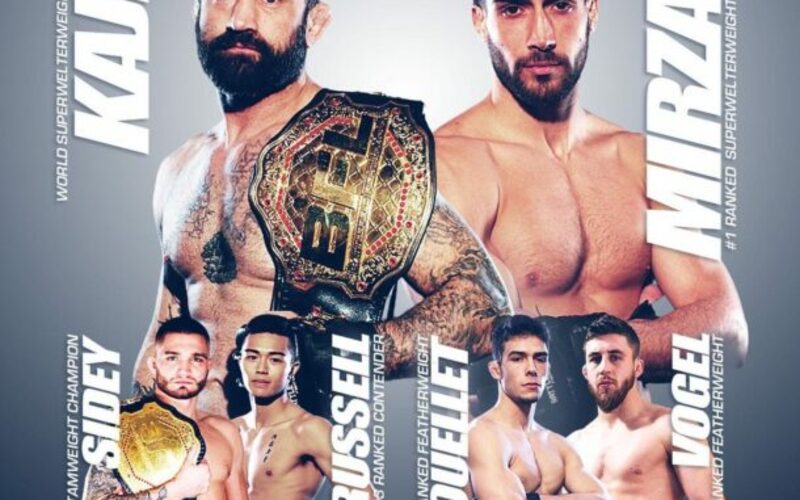 Battlefield Fight League returns on April 28 for one of the most stacked fight cards in promotional history. And we will have full BFL 72 results for you all evening long.

The main event will pit two former training partners across the cage from each other, as the multi-division champion Dejan Kajic will put his 175-pound championship on the line against Saeid Mirzaei. Kajic earned his first BFL championship in 2018 when he finished Chris Anderson. He has gone on to win four in a row and become one of the most dangerous strikers on the roster. Mirzaei had an illustrious amateur career and upon turning pro has stepped right into the lions den. With a 3-0-1 record Mirzaei can not be overlooked and will bring a very strong wrestling pedigree to the cage on Thursday night.

In the evening’s co-main event, Serhiy Sidey will face undefeated Austin Russell for the bantamweight championship. Sidey beat Gio Platon to capture the title and went on to defend it against Ali Wasuk at BFL 71. His opponent, Russell, has fought twice under the Battlefield banner, earning a submission victory over Indroop Virk in his debut and a decision against Platon in his most recent outing.

If that wasn’t enough, there is a third title up for grabs, as submission ace, Nicolas Ouellet will square off against Mateo Vogel in an East vs. West match-up for the featherweight championship. Ouellet is 2-0 in his career and finished both his opponents with nasty, but impressive submissions. Standing across the cage from him will be the 5-2 Vogel, who makes his promotional debut. The Ottawa native will look to get back on track with a victory, as he lost a close decision to Da’Mon Blackshear in his most recent outing in 2021.

Dejan Kajic def. Saeid Mirzaei via TKO (Referee Stoppage Due to Injury) at 3:27 of Round 1 – 175-pound Championship

Ryan Rohovich def. Josh Kwiatkowski via Submission (Triangle Choke) at 4:25 of Round 3

– Cancelled Due to Crosswell No Showing

Mitch Strazzella def. Matt Hovorka via TKO (Punches) at 4:38 of Round 1

Tylor Nicholson def. Nate Ledger via Submission (Rear-Naked Choke) at 2:39 of Round 1

Melvin Panganiban def. Sheldon Nicodemus via Knockout (Punch) at 0:23 of Round 1

Marcus Coward def. Cannon Tass via Submission (Kimura) at 2:37 of Round 3