5 MMA Fighters Who Played In The NFL 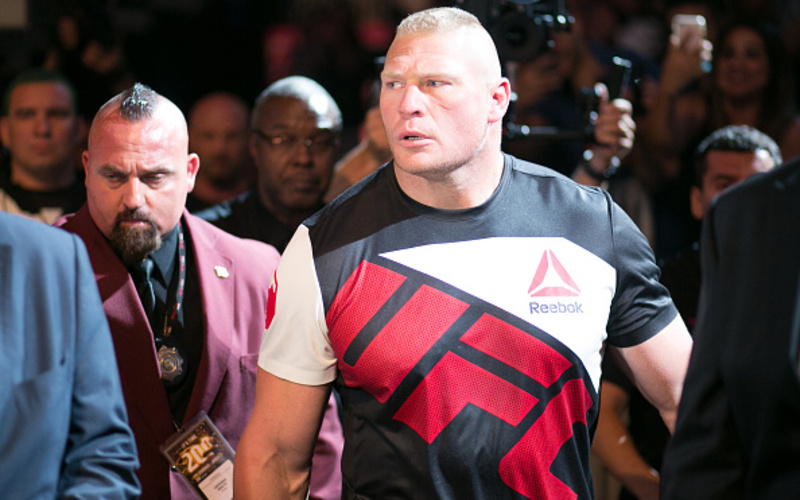 MMA is a sport of great athletic nature. Some fighters started their careers in different kinds of martial arts like boxing or wrestling. Other fighters did not start their MMA careers until after they competed in sports like football and basketball. With the 2022 NFL draft now being in our rearview, let’s take a look at five former NFL players that competed in the sport of mixed martial arts.

Most fans remember Brock Lesnar as a WWE superstar that came into the UFC and won the UFC heavyweight title. What people seem to forget is that after his WrestleMania XX match in March of 2004, Lesnar turned his talents to the football field , entering the NFL combine. After dealing with several injuries and health scares, he finally signed with the Minnesota Vikings in July of that year. Although Lesnar did not play in a regular-season game, he played quite a few preseason games that season. He did not end up working out the way the Vikings had planned and ended up being released before the season started.

Brock Lesnar debuted in the UFC with a submission loss to Frank Mir at UFC 81 in 2009. He then beat Heath Herring and then went on to win the heavyweight title with a TKO win over Randy Couture at UFC 91 in 2009. Lesnar defended that title twice before losing it to Cain Velasquez just a year later. After losing the title, Lesnar got finished by Alistair Overeem and then won a decision over Mark Hunt. His win over Mark Hunt was overturned to a no-contest after Lesnar tested positive for clomiphene. After his suspension, Lesnar went back to the UFC and has since not expressed interest in returning to the UFC.

Herschel Walker was drafted in the 1985 NFL draft by the Dallas Cowboys in the fifth round. The running back achieved a great career in the NFL, playing for four different NFL teams throughout his 14-year career. Walker was mostly known for his national title win in 1980 and his Heisman trophy win in 1982, but he also went to two pro bowls and was a two-time second-team all-pro. In the NFL, Walker had two 1,000-yard seasons. One of them was in 1988 with the Cowboys and the other was in 1992 with the Philadelphia Eagles. Throughout his 14-year NFL career, he scored 61 rushing touchdowns and 21 receiving touchdowns.

In November of 2007, Herschel Walker appeared on the show Inside MMA where he announced he was going to take part in an MMA reality show with Jose Canseco. At the end of the show the fight never materialized and he then signed with Strikeforce in 2009. In 2010, at 47 years old, Walker made his professional MMA debut against Greg Nagy at Strikeforce Miami. He ended his MMA career with a record of 2-0, winning both of his fights by TKO.

Most fans remember Marcus Jones for being on The Ultimate Fighter with guys like Matt Mitrione, Brendan Schaub, and Kimbo Slice in 2009. They seem to forget that Jones was selected by the Tampa Bay Buccaneers in the first round of the 1996 NFL draft. He played for the Buccaneers for six years before playing with the Buffalo Bills in 2002 and eventually being released due to a knee injury. Over his six-year NFL career, Jones had 124 career tackles and 24 career sacks.

After being released by the Bills, Jones left his athletic career behind him for the next five years. In 2007 he made his professional MMA debut with a submission win over Will Mora at World Fighting Championships 5. He racked up a 4-1 record before being asked onto the Ultimate Fighter in 2009. In the TUF house, Jones went 2-1 losing his last fight on the show to Brendan Schaub. He ended up fighting Matt Mitrione in the finale and was knocked out in the second round. Jones has not fought since 2009 and has made no indication that he would like to return.

In 1995, the Washington Redskins drafted Michael Westbrook with the fourth overall pick in the 1995 NFL draft. Westbrook dealt with injuries his entire career only playing all 16 games in two of his eight NFL seasons. One of those 16 game seasons was in 1999, where had 65 receptions for 1,191 yards and nine touchdowns. In the other 16-game season, he had 57 receptions for 664 yards and four touchdowns. In 2002, Westbrook left the Redskins and signed with the Cincinnati Bengals. He played nine games with the Bengals but only caught eight balls for 94 yards and two touchdowns.

He retired from the NFL in 2002 and made his professional MMA debut at KOTC 48 in 2005. Westbrook had a professional MMA record of 1-1-1 with his loss being a TKO loss in 2009 against former UFC heavyweight, Travis Browne. The last MMA fight of his career was a no-contest after he was kneed in the groin by Nick Gaston in the main event of KOTC Connection in 2009. Over his four-year MMA career, Westbrook earned his black belt in taekwondo and his brown belt in Brazilian Jiu-Jitsu.

Greg Hardy is by far the most notable NFL star to compete in mixed martial arts. Hardy was drafted by the Carolina Panthers in the 2010 NFL draft. He played five seasons for the Panthers and had double-digit sacks in two of those seasons. In 2013, Hardy racked up 15 sacks and 59 total tackles. The following season he was put on the commissioner’s exempt list for a majority of the season while his domestic violence case played out. In the 2015 season, Hardy signed with the Dallas Cowboys to try and mount a comeback. That season he would serve a four-game suspension for violating the NFL personal conduct policy. In the 12 games that he played, he racked up 35 tackles and six sacks. The Cowboys choose not to resign him in the offseason and Greg Hardy was out of the NFL.

In 2018, Hardy made his professional MMA debut with a KO over Austen Lane on Dana White’s Contender Series. He went 3-0 before signing with the UFC and losing his debut by disqualification after an illegal knee. Hardy went 4-5-1 in the UFC and finished his UFC career on a three-fight losing streak, being knocked out in all three of those losses. The one no contest on his record was originally a decision win for Hardy over Ben Sosoli. The decision was overturned because Hardy used his inhaler in between rounds.