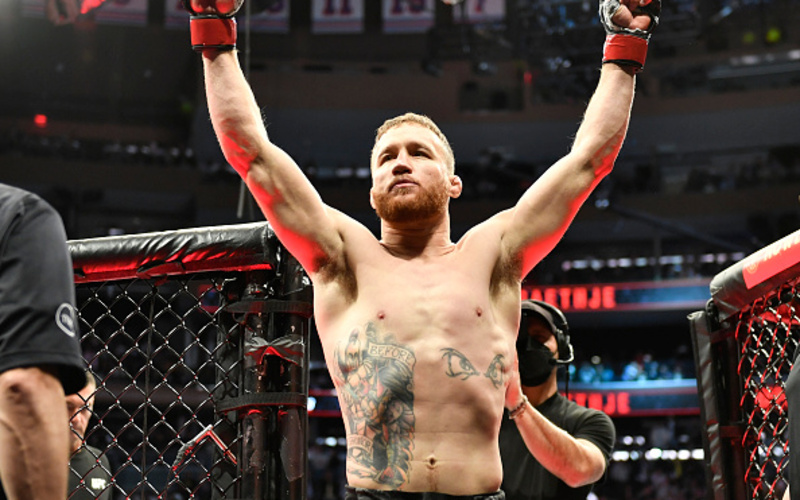 The blockbuster UFC 274 card goes down this weekend from the Footprint Centre in Pheonix, Arizona. The card will feature not one but two huge title fights as well as plenty of talent littered throughout the main card and the prelims. Headlining the card will be the lightweight champion, Charles Oliveira, who looks to defend his crown against the former interim champion, Justin Gaethje. The co-main event sees a rematch between two-time strawweight champion, Rose Namajunas and the in-form, Carla Esparza.

We take a look at Gaethje’s keys to victory and how he can utilise these tactics to capture the belt on his second time of asking.

Notorious for his brutal leg kicks, Justin Gaethje needs to utilise one of his best weapons to shut down the forward pressure of the champion. Oliveira lands 3.44 strikes per minute, however, in recent performances we’ve seen him constantly march forwards, pressuring his opponents. Much of his pressure is to snatch hold of a leg, get his opponent down to the ground and work his phenomenal BJJ game. We know he holds the most submissions in UFC history but with a takedown average of 2.50 per fight, it suggests that it only takes one takedown for his opponents to be in trouble.

If Gaethje is able to batter the lead leg of Oliveria, it will undeniably reduce his forward pressure and also lead to him falling into shots, rather than using the crisp technique we’re so used to with the champion. Against Dustin Poirier, although he lost the fight eventually, Gaethje was able to brutalise the leg of ‘The Diamond’. He didn’t discriminate whether it be inside or outside leg kicks, Gaethje landed them.

Gathje wants to avoid the ground game of Oliveria at all costs. One key way for the champion to counter the leg kick is to shoot for the takedown off the leg kick of Gaethje. Against Michael Chandler, Gaethje was able to avoid this specific counter. Chandler instantly shot in and looked for the takedown off the Gaethje leg kick, however, Gaethje used his wrestling background to throw his hips back and avoid the takedown. Entering the UFC 274 main event, Gaethje holds a 73% takedown defence and most recently defended five of six takedowns against Chandler. Even with the single takedown that Chandler landed, he wasn’t able to control Gaethje at all.

The leg kick in this one will be key in Gaethje stopping the forward momentum, affect the slick technique of the champion as well as hindering his movement. This is Gaethje’s first key to victory.

Be Careful Getting into Long Exchanges

We know how entertaining and exciting the challenger, Justin Gaethje can be. The 10 post-fight bonuses in nine UFC fights speak for themselves. One of the key reasons that every Gaethje fight is a must watch is his tendency to be willing to receive several shots in order to land his own, as well as staying in the pocket and swinging with his opponent. Although this is his style, in previous fights, we’ve seen him be slightly more calculated, more switched on with regards to his defence and more conservative with his energy. With that being said, against Chandler, he went back to the ‘old’ Gaethje.

Against Oliveria, the challenger has to be careful getting into extended exchanges. Although he’s often effective, so is Oliveira. The Brazillian won the belt when he knocked out Michael Chandler and a big left hook on the end of an extended exchange led to the beginning of the end for the American. This is certainly something that Gaethje has to be aware of. We saw the same thing against Jared Gorden. Oliveira was able to land a short right hook after Gorden waded in with multiple shots, rocking the American before an uppercut knocked him out.

Another risk that comes with getting into a long exchange with Oliveira is that he (similar to the counter off the leg kick) can change his level and shoot for a takedown. We saw this against Kevin Lee. Lee threw a jab, hook, followed by two further jabs before a straight right down the pipe. Oliveria was able to time the right hand, duck under and grab the lead leg of Lee and drive him to the fence.

It would benefit Gaethje not to throw extremely long, four or five punch combinations as they would allow Oliveira opportunities to counter. Keep it simple, pop shot and look to hurt Oliveira with power rather than volume. This is the second key to victory.

The clinch is where the champion, Charles Oliveira does some of his best work. He can either punish his opponents with slick Muay Thai attacks, utilising elbows and knees or he can look to pull the head down of opponents and snatch a choke.

We saw against Dustin Poirier that the champion punished the challenger every time he closed the distance, grabbing hold of the muay thai plum and punishing with knees to the mid-section. Against Gaethje, a fighter who is susceptible to wading forwards, looking to close distance, stand flat-footed and unload, he is certainly there to be hit. This is the key reason why ‘The Highlight’ needs to avoid the clinch.

Other Keys to Victory