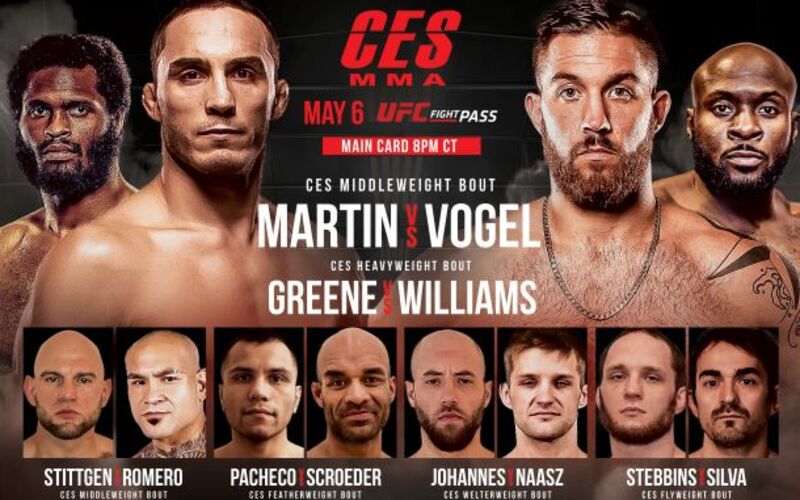 CES makes its maiden voyage into North Dakota tonight, with CES 68 happening live from the Veterans Memorial Arena in Fargo.

In the heavyweight main event, another former UFC fighter will return for the first time since being cut from the organization as Maurice Greene battles Danyelle Williams. “The Crochet Boss” Greene had a 4-4 run in the UFC, losing four of his last five after starting off 3-0. He faces “D-Day” Williams, who has lost three in a row, including a main event loss to another UFC vet in Yorgan De Castro at CES 65.

The co-main event will see longtime UFC lightweight and welterweight Anthony Martin return to action for the first time in nearly two years, moving up to middleweight to take on Bellator vet Tim Bazer. Martin returns to the regional scene after a 15-fight tenure in the UFC, and has lost two of his last three, albeit to ranked foes Neil Magny and Demian Maia. Bazer, meanwhile, takes this fight on two days’ notice after not fighting since 2018, and is a 45 year old 37-fight veteran that has won three of his last five.

Two welterweight veterans will also face off, as Alaska’s Deven Paulsen faces Tat Romero on two days’ notice. While Paulsen has an even record at 4-4, he has won each fight by knockout. “Mean Bean” Romero has not fought in more than four years, most recently appearing with the LFA in April 2018, but has won five in a row to sport a 29-6 record overall.

MMA Sucka has fight fans covered with CES 68 results, with the card kicking off at 8pm ET/5pm PT on UFC Fight Pass.

Anthony Martin def. Tim Bazer via Submission (D’arce Choke) at 1:05 of Round 2

Tat Romero def. Deven Paulsen via Submission (Arm Triangle Choke) at 4:49 of Round 1

Angel Pacheco def. Zack Schroeder via TKO (Ground and Pound) at 0:47 of Round 1

Coty Milhausen def. Christian Cardona via TKO (Ground and Pound) at 1:10 of Round 1