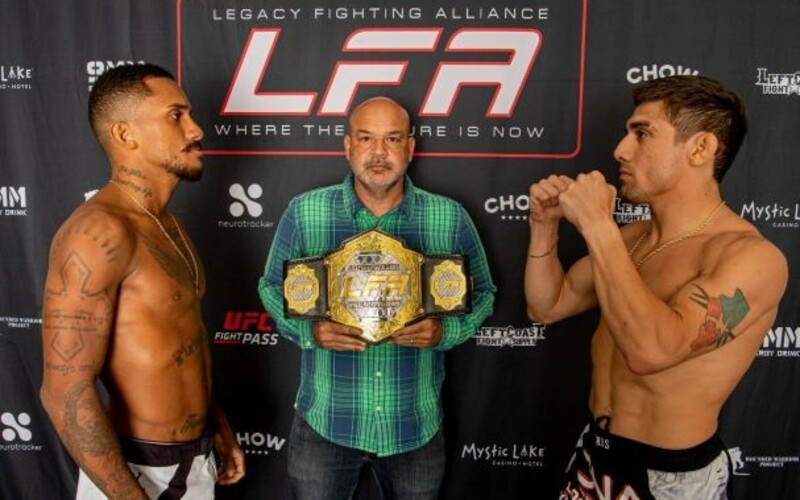 After a week away, the LFA picks the action right back up tonight with LFA 131, live from the Hilton Garden Inn in Oshkosh, Wisconsin.

The LFA bantamweight title is up for grabs as TUF 29 alum Dan Argueta faces off against CES bantamweight champion Diego Silva. Since losing to eventual season winner Ricky Turcios on TUF, “The Determined” Argueta has returned to LFA with a vengeance, picking up back-to-back finishes. “Magrinho” Silva, meanwhile, captured the CES title in a decision victory over UFC vet Andre Soukhamthath at CES 64 in March to bring his overall record to 14-6.

Two fighters will compete on back-to-back LFA cards. Both Jalin Fuller and Darrius Flowers picked up dominant finishes at LFA 130 and are set to return tonight. “Beast Mode” Flowers will take on “The Amazing” Tim Hiley, who will return to MMA and the LFA for the first time since September 2020 in the co-main event. “The Gentleman” Fuller, meanwhile, will battle Kyrgyzstan’s 6-1 Myktybek Orolbai, who finally gets a fight after three unsuccessful bookings over the past two months.

Before that, BFL and Bellator vet Hamza Salim returns to the cage for the first time since an October 2020 loss at Bellator 249 to face “Party Time” Wes Schultz, who steps in on hours’ notice looking to follow up his professional debut with a second win.

Darrius Flowers def. Tim Hiley via KO (Uppercuts) at 0:43 of Round 1

Maria Henderson def. Jena Williams via Submission (Triangle Americana) at 1:41 of Round 3

Dalton Holmes def. Malaquias Jarmon via TKO (Ground and Pound) at 1:32 of Round 1

Jeremy Strobel def. Andre Sellars via TKO (Ground and Pound) at 1:11 of Round 3