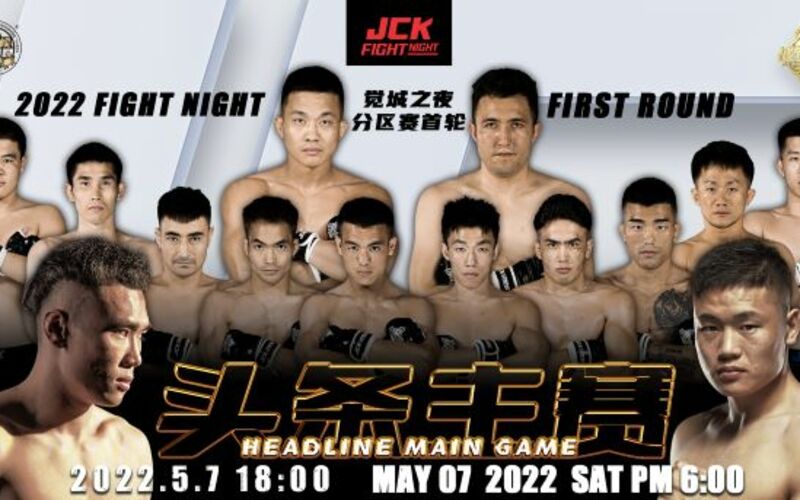 Chinese MMA has found a new banner carrier in the JCK organization, and the promotion goes live with their illustrious 2022 season today. Over 500 fighters applied to take part in their massive season of tournaments across five weight classes and eight months. A postponed final from the last season heads today’s opening event off, the first of weekly events for the rest of the year. Stayed tuned right here for live JCK Fight Night: First Round results.

The experience level on JCK’s roster covers the entire spectrum of MMA. Fighters making their pro debuts compete alongside veterans with a lifetime of experience. While many would think the results would be quick fights for veterans to make easy money, one welterweight in particular defied the odds and blasted his way to the JCK finals. At just 4-0 and 25 years old, Aorigele gets a chance to earn one million RMB with a win in today’s main event. This fight is the finale fight of the 2021 season, but was postponed until now.

His opponent is another dazzling striker in Ding Meng. Ding has vastly more fight experience than Aorigele, and almost never goes the full distance. He is 9-1 in his last ten fights, finishing all of those wins. Ding is no stranger to fighting young, freakishly strong prospects and taking them out. He’s coming off a win over Tibetan prospect Taiyilake Nueraji in the JCK semifinals, where he finished Taiyilake with a liver kick.

Ding Meng has fought across the board in China, fighting for ONE, CMSL, and WLF. He has fought five rounds before, even though this fight is likely to see a finish. One thing to watch is the conditioning of Aorigele. As this is just his fifth pro fight, he has never been through a war like this should it drag on. Ding may slow the pace down and try to set up a finish in the later rounds if Aorigele can’t hang for that long. Of course, avoiding the power that Aorigele carries in his fists is easier said than done.

The co-main event of JCK’s First Round card features a featherweight fight between Huwannixi Wusikenbieke and Liu Mengyu. Huwannixi is on a rough stretch as of late, but several of his losses come to top-shelf athletes like UFC vets Shayilan Nuerdanbieke and Rong Zhu. The fighter from northwest Xinjiang province takes on Liu, who hails from Hebei Cangzhou Lion MMA Team.

The rest of the card features a lot of young fighters making their pro debuts, and it’ll be interesting to see who stands out on this first night of fights in the round of 32.

Full live results for JCK Fight Night: First Round are below.

Huwannixi Wusikenbieke def. Liu Mengyu via Submission (Rear Naked Choke) at 2:17 of round 1

Yang Fei def. Li Jiesheng via Submission (Triangle Choke) at 4:54 of round 1

Ding Meng def. Aorigele via TKO (Ground and Pound) at 2:55 of round 2 to win the JCK 2021 Season Welterweight Tournament Final

Nie Weichao def. Wang Hongyu via TKO (Ground and Pound) at 4:41 of round 2