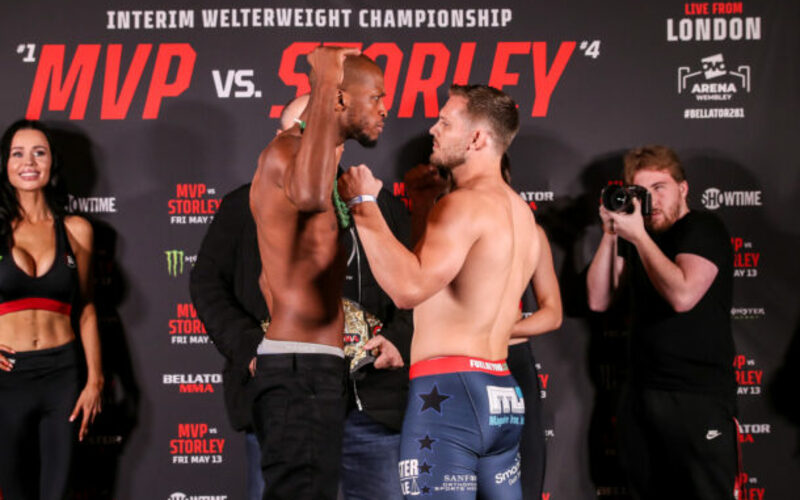 Bellator MMA returns to London, England, for the second time in eight months with a deep card of fights. Beloved veterans, a local superstar, and a send-off of one of MMA’s most notorious knockout artists stacks the deck for UK MMA fans. Stay tuned right here for live Bellator London results.

The days of critiquing the level of competition for Michael “Venom” Page (20-1) are over. While it’s an interim title, he still gets his first shot at Bellator gold after eight years with the company. His opponent is Logan Storley (13-1), an American wrestler coming over with a near-perfect record. The winner will fight the champion Yaroslav Amosov sometime later, as Amasov is defending his home country of Ukraine at the moment.

“MVP” has proven to be one of Bellator’s top producers of highlight reels, finishing twelve of his seventeen wins for the promotion. The outspoken Brit recently avenged his sole loss to former champion Douglas Lima at the last Bellator London show, proving that he’s ready to fight for a belt. The road has been longer than it needed to be, but Page finally has a chance to cash in all the fame he’s built for himself.

Getting through Logan Storley, on the other hand, won’t be so easy. “Storm’s” only loss is a split decision to undisputed champion Yaroslav Amosov, and he’s coming off a shutout of Neiman Gracie. Storley will undoubtedly try to wrestle Page, but if he can’t, he’ll have to trade with him on the feet. Only one fighter- Lima- has ever solved the  striking puzzle of Michael Page, so it will be interesting to see if Storley’s coaches Sanford MMA can put together a plan to utilize Logan’s strengths.

Rest of the Card- Retirement of Semtex

The main card of Bellator London features revered veterans fighting at the end of their careers. First up is Paul Daley, fighting in his 64th- and final- MMA fight. Daley burst onto the scene in UFC, knocking out Martin Kampmann and Dustin Hazelnut. An infamous scene in which Daley shoved a referee after a fight with Josh Koscheck would get him banned from the UFC for life, although the incident further built his explosive repertoire.

Daley fought in Strikeforce and around the world before re-settling in Bellator, where he’s finished out the last seven years of his career. He fights 9-2 Brazilian Wendell Giacomo, a relative unknown except for his recent win on an LFA Brazil show. Giacomo undoubtedly fights in a life-changing opportunity with the chance to introduce himself to the world with a win over a notorious brawler.

Also on the main card is legendary karateka Lyoto Machida fighting British prospect Fabian Edwards in the co-main event.  While on a three-fight losing streak, Machida is yet to be finished in Bellator. “The Dragon” is 43 years old and faces a middleweight in the prime of his career also looking to establish himself with a win over a former UFC champion.

Fabian Edwards def. Lyoto Machida via KO (Left Hooks) at 3:18 of round 1

Kana Watanabe def. Denise Kielholtz via Submission (Triangle Choke) at 3:03 of round 2

Paul Daley def. Wendell Giacomo via KO (Right Hook) at 4:09 of round 2

Daniel Weichel def. Robert Whiteford via KO (Uppercut and Right Hook) at 1:12 of round 1

Elina Kallionidou def. Kate Jackson via TKO (Punches) at 4:53 of round 2

Oliver Enkamp def. Mark Lemminger via Submission (Buggy Choke) at :25 of round 3