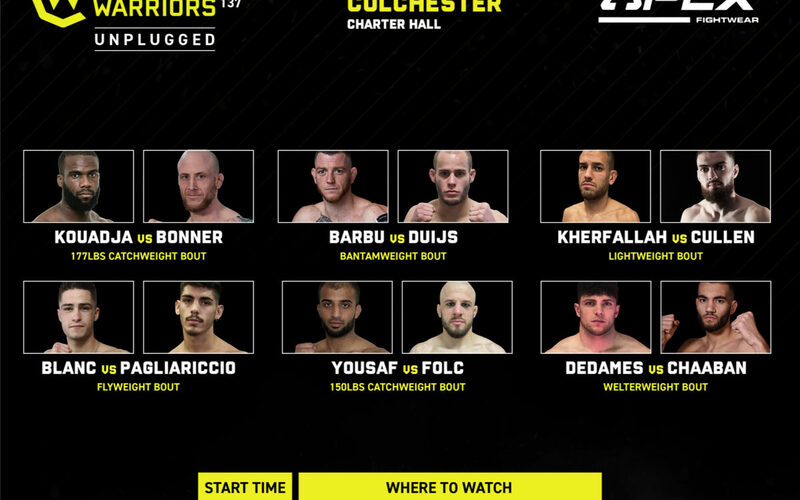 Cage Warriors 137 goes down on Friday evening locally from Charter Hall in Colchester, England, and will feature a main event tilt between former middleweight champion Matthew Bonner and France’s Joël Kouadja in a 177-pound catchweight fight.

Bonner (11-7-1) will be making a quick turnaround after winning impressively at CW 135 just two months ago and will also be looking to make it six wins in his last seven contests against a man making his Cage Warriors debut. Kouadja (7-8) has been red hot while fighting in hometown promotion 100% Fight, having rattled off six consecutive victories with five finishes after starting his career a meager 1-8. The knockout artist is now in search of the biggest win of his career on the biggest stage, and a victory over the former promotion’s former middleweight champion should tick both boxes. As for Bonner, a win could put him back in line for a title shot, whether that means attempting to regain his 185-pound crown or completing a move down to 170 pounds, something he alluded to back when he had the middleweight strap.

Join us from 9pm (BST) on @UFCFightPass for #CW137 – 𝗟𝗜𝗩𝗘 from Colchester, UK. pic.twitter.com/M32jWVc0Wz

The co-main event will feature an interesting style matchup between Romania’s Bogdan Barbu and Holland’s Daan Duijs at bantamweight. Duijs (7-1) is a proven finisher off his back, with three triangle choke finishes on his record (four if you include his amateur career), though he has also proven lethal from top control, scoring ground-and-pound finishes on multiple occasions. Barbu (17-12), meanwhile, prefers the striking game but has shown a willingness throughout his career to change levels when the situation calls for it, so Friday’s co-main event could likely come down to who is able to win the grappling exchanges early before fatigue begins to set in.

Unbeaten English prospect Adam Cullen is also scheduled to compete on Friday, along with countrymen Shoaib Yousaf and Jack Dedames as the latter two look to make successful promotional debuts.

Friday’s card, which is an “unplugged” event with a limited amount of fans in attendance, is set to get underway at 1 p.m. ET/10 a.m. PT on UFC Fight Pass. MMASucka has fight fans covered with live results to be updated throughout the card.

Daan Duijs def. Bogdan Barbu via Submission (Triangle Choke) at 2:55 of Round 1

Adam Cullen def. Arnaud Kherfallah via Submission (Anaconda Choke) at 1:20 of Round 1

Shoaib Yousaf def. Michał Folc via Knockout (Knees) at 2:35 of Round 1

Omran Chaaban def. Jack Dedames via Submission (Anaconda Choke) at 4:07 of Round 1