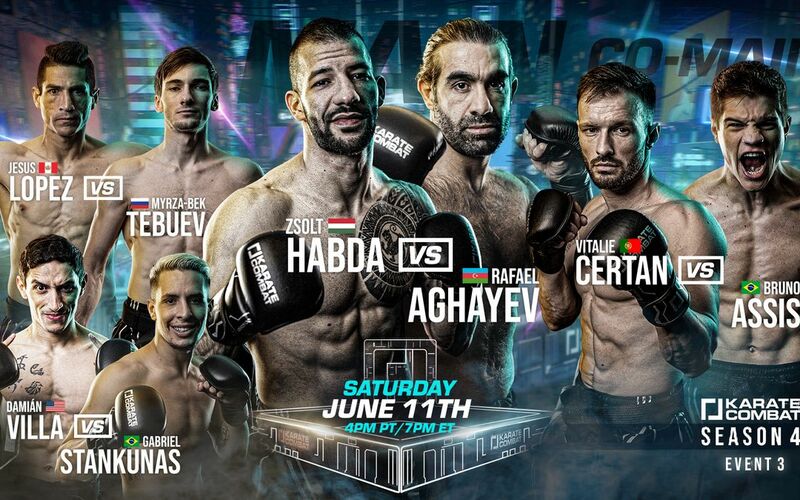 The electric and innovative full contact karate promotion Karate Combat returns tonight at Universal Studios, Florida for Karate Combat Season 4 Event 3. The main event sees the return of the 2020 Olympic Karate silver medalist Rafael Aghaev against Hungarian Special Forces Operator Zsolt Habda. Aghaev will be looking to add on to his already “Greatest of All Time” legacy in Karate that includes multiple European and WKF Championships, while Habda will be seeking to build momentum from his Season 3 TKO win and spoiling Aghaev’s highly anticipated return.

The co-main features Bruno Assis who is trying to get back in the win column after his unsuccessful attempt at capturing the title. He will be fighting the action-packed Vitalie Certan, last year’s winner of ‘Fighter of the Season’ and ‘Fight of the Season’. This fight has even higher stakes with the winner possibly fighting for the belt next.

Myrza-Bek Tebuev will come off his long layoff from an injury sustained while fighting against Jesus Lopez. This will be a tricky fight to navigate for the Dagestani fighter as Lopez will be looking to showcase his devastating power punches tonight.

Rounding out the event will be a great clash of styles between debuting fighters Damian Villa and Gabriel Stankunas. Villa is a world champion in taekwondo bringing a unique background to Karate Combat when he goes against Stankunas, who is decorated in his own right being a Brazilian national karate team member.

Enjoys MMA, golf and is a big comic book nerd