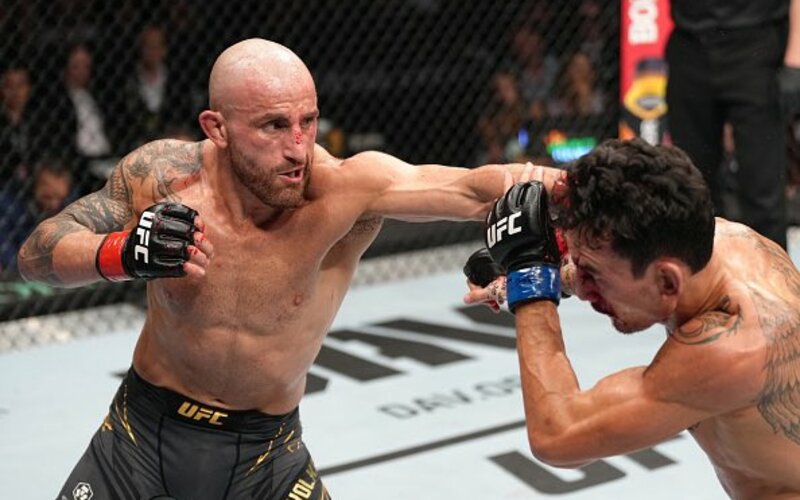 In the co-main event of UFC 276, we have the trilogy between Alexander Volkanovski and Max Holloway.

This fight is expected to be great, with both fighters showing improvements since their second meeting and Holloway displaying an uncharacteristic amount of energy during fight week.

Check out the full Volkanovski vs Holloway recap below.

The round started out with Holloway moving forward and firing kicks. The next couple minutes were mostly a feeling-out process with both fighters trying to get a read on one another. The action would pick up significantly halfway through the round, with Volkanovski appearing to be the quicker fighter as he was getting the best of the exchanges. The round ended with Holloway getting in a good few shots

Round 2 was much of the same with Holloway pushing forward and Volkanovski landing the better and more frequent shots. Both fighters landed some good elbows in the clinch

Holloway has a brutal cut above his right eye. Great work from the cutman to stop the bleeding. That is definitely something to keep an eye on for the rest of the fight.

Volkanovski is on fire tonight. His jab has been on point so far and that has helped set up some big right-hands. Volkanovski is obviously the much quicker fighter and is showing no signs of slowing down. Amazing toughness on display from Holloway as well.

The cut on Holloway is absolutely brutal. More dominance from the champ, but Holloway did land a handful of good kicks and combinations. Hard to believe he’s still moving forward. Nice to see Holloway’s corner being honest with him

The round starts with Holloway going for a takedown, Volkanovski promptly reversed it and moved off the cage after a brief exchange in the clinch. Volkanovski continues to improve throughout the fight and is pouring it on Holloway. We’ve never seen Holloway cut up and dominated like this-an absolute masterclass in this fight from the champ.

Alexander Volkanovski may have just cemented himself as the featherweight GOAT with that performance. 🇦🇺

Can’t see any one else in that division reaching his level. 🤷🏼‍♂️

Would love to see him move up to lightweight and face Charles Oliveira. 🤩 pic.twitter.com/WKSQTg1AVt