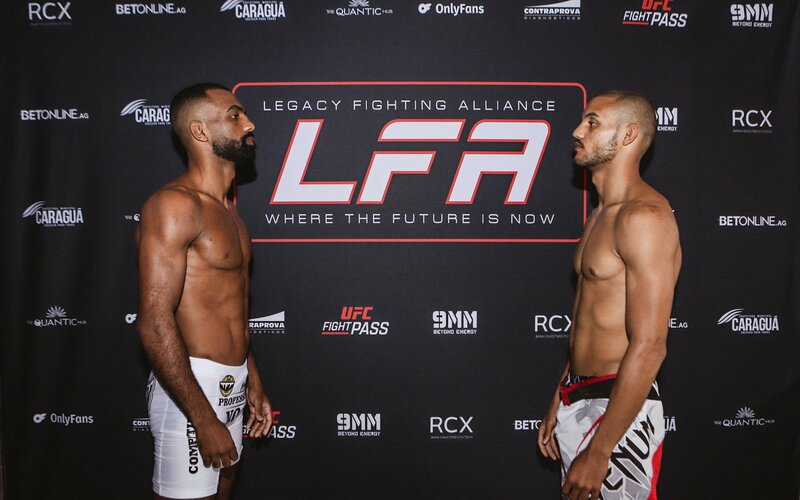 Legacy Fighting Alliance is back in Brazil, ready to elect the next great Brazilian prospects. LFA 136 goes down in Sao Paolo tonight, with twelve bouts in tow on an all-Brazil card. The entire card has a Rio de Janeiro vs. Sao Paolo theme, so stay tuned right here for live LFA 136 results.

After his victory in the last LFA Brazil main event, the promotion quickly re-booked Italo Gomes (11-2) for the next one. While the representative of Rio de Janeiro is still looking for a belt to accompany his success in Brazil, a win would certainly put him in line for the currently vacant LFA featherweight championship. “Chipa” trains out of Tata Fight Team in Rio, which also produced UFC light heavyweight Thiago Santos.

His opponent tonight is 22 year-old Wellington Prado (12-2) of Sao Paolo. Prado is the former SFT featherweight champion and the current Iron Fight champion. “Predador” trains locally at China Team and will have the fans in the arena on his side. N0t 0nly is Prado a BJJ black belt, but he has been fighting pro since the age of 15. He may be on the young side of fighting on a big stage, but he carries himself like a veteran.

Now that #LFA136 weigh-in is in the books, which fight are you looking forward to most?

Several other high-level Brazilian prospects adorn the LFA 136 card, perhaps most notably Jean Matsumoto (10-0). Jean should absolutely get a call up to the big leagues with a win at LFA 136, as his competition at bantamweight has gotten better and better already. He’s the reigning champion at both SFT and Fight Pro Championships, and he will not be fighting regionally for too much longer.

Jonas Bilharinho also makes a return to the LFA cage to prove that he can break through a plateau in his career. After an underwhelming showing on Dana White’s Contender Series, Jonas went on to lose a close decision to Jose Delano in the LFA 126 main event. At 32, he needs to show that he can bring the fight into a higher gear and fulfill his potential.

Other prospects on the card worth watching are Eduardo “Chapolin” Henrique (10-1) in the co-main event at flyweight and Bruno “Brunao” Lopes (9-0) at light heavyweight.

Bruno Lopes def. Mailton Azevedo via Submission (Arm Triangle Choke) at 4:49 of round 1

Jairo Pacheco def. Rhalber Bernardo via TKO (Punches) at 4:33 of round 2

Gabriel Souza def. Patrick Bittencourt via Submission (Guillotine Choke) at 4:04 of round 2

Ewerton Polaquini def. Alexandre Silva via Submission (Rear Naked Choke) at 4:00 of round 2