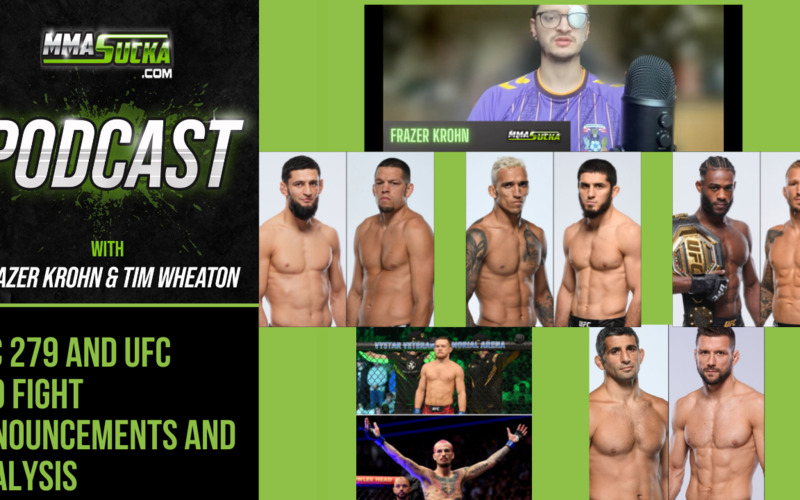 The MMASucka podcast is back with a bonus podcast this week as Frazer Krohn sits down to discuss some huge fight announcements that have gone down in the past few days. You can check out the full podcast here:

It was announced by ESPN’s Brett Okamoto this week that the UFC 279 main event will be contested between Nate Diaz and Khamzat Chimaev. Diaz will fight out his contract in a five-round none title main event against the undefeated Chimaev. It’s a fight that many have asked for, however, the odds suggest that Diaz doesn’t have a huge chance of winning.

His paths to victory are far more complicated than that of Chimaev’s, who has far more power, superior wrestling ability and good enough defensive jiu-jitsu not to get in too much trouble on the ground.

On paper, UFC 280 is shaping up to be the biggest card of the year thus far. The main event is set and features a bout for the vacant lightweight title between Charles Oliveira and Islam Makhachev. The belt is vacant after the Brazillian missed weight last time out.

The co-main event is rumoured to be Aljamain Sterling squaring off again TJ Dillashaw for the bantamweight strap. Sterling is coming off the biggest win of his career when he narrowly outpointed Petr Yan last time out. Dillashaw defeated Cory Sandhagen in his return from suspension back in July.

Another bantamweight bout that has been rumoured is a potential banger between the former champion, Petr Yan and the up and coming, unproved star, Sean O’Malley. This is a huge step up in competition for O’Malley as the former champion is considerably better than anyone ‘Suga’ has fought before. He has twice come up short when he’s taken the step up in competition, firstly when he faced Marlon Vera and last time out against Pedro Munhoz. The Munhoz fight ended in a no-contest following an eye poke, something that has been discussed in detail on a previous MMASucka podcast. For Yan, it’s a risky fight with little to gain, however, this doesn’t mean that it isn’t guaranteed fireworks.

The other fight announcement featured a clash between #6 ranked lightweight, Beneil Dariush and Mateusz Gamrot. The winner of this one is set for a title shot and one of these men will inevitably fill in if one of the main eventers pulls out. The winning run of both of these men makes this fight extremely exciting because it shows that both men are in-form will give it their all to get their hand raised.

Which fight announcement are you most looking forward to? Let us know below!