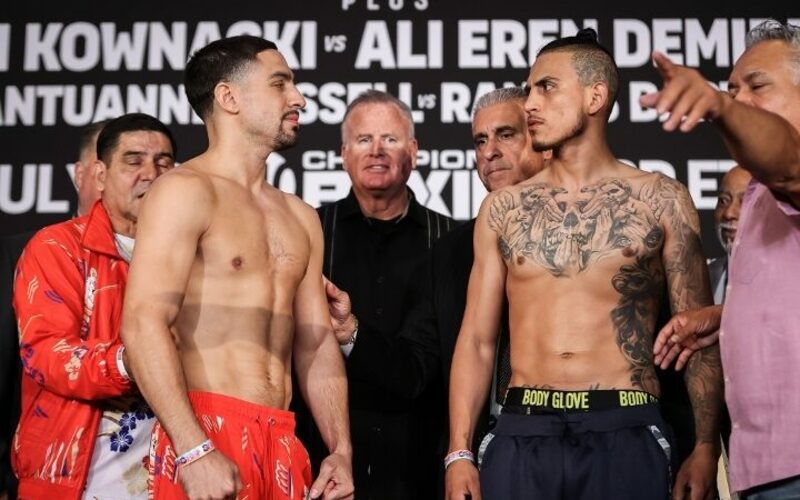 Danny ‘Swift’ Garcia returns to the Barclays Center in Brooklyn, New York in an attempt to make a statement in the Super Welterweight division as he takes on Jose Benavidez Jr this Saturday live on Showtime.

Garcia (36-3, 21 KO) looks to pursue a championship in a third-weight class as he returns to the Barclays Centre for the ninth time in his career and where he made his professional debut ten years ago.

Once he jumped to 147 lbs, Garcia beat former champions Paulie Malignaggi, Lamont Peterson and Robert Guerrero en route to his second divisional title. It was in this division however that he found competitive losses against Keith Thurman, Shawn Porter and current unified champion Errol Spence Jr.

Now in a comeback fight, Garcia looks to add to his resume by jumping to 154 lbs to collect another divisional gold and add the 154lbs belt to his resume.

Known as the older brother of current WBC interim champion David Benavidez, Jose last fought in November 2021, a contest which ended in a draw against Francisco Emanuel Torres. It was Benavidez Jr’s first fight in over three years, after beating contenders Mauricio Herrera, Francisco Santana, and Frank Rojas before losing to Crawford.

Now Garcia is the fighter with significant time away from the ring, being sidelined for 16 months. Garcia has to turn back the clock a little to the elite fighter he showed at 140 and even 147 lbs. Many believe Benavidez Jr will only come straightforward and be an easy target for Garcia to put away, the problem is Benavidez Jr is the bigger fighter with less wear and tear on his body than Garcia has received the last couple years.

With newly crowned Undisputed super welterweight champion Jermell Charlo waiting for fresh opponents to line up, this fight is sure to be on the champion’s radar.
Comment on this article
Give us feedback