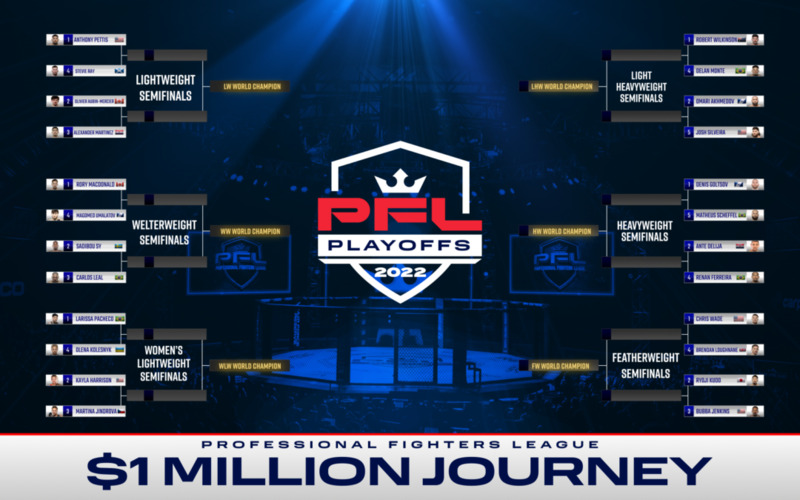 The PFL playoffs return this weekend with the men’s lightweight and light heavyweight brackets kicking off things live from New York City. With four compelling match-ups, we take a look at each fight and predict the winners of each $1 million tournament.

The first PFL playoff takes place from the Hulu Theatre at Madison Square Garden in New York. The main event sees a rematch between Anthony Pettis and Stevie Ray. The two clashed in June, with Ray coming away with an upset victory. Not only did he pick up the win, but he did so in a strange fashion winning via submission due to a modified twister. As per DraftKings, Ray is the favourite heading into the rematch, despite being the fourth seed. There are plenty of questions heading into the bout, especially as the two only met a little over a month ago. Can Pettis turn it around and make the appropriate adjustments? Or will Stevie Ray hand ‘Showtime’ his second straight loss and his fourth loss in five bouts? Tune in to find out!

In the other lightweight semi-final, UFC vet, Olivier Aubin-Mercier takes on Alex Martinez. After three straight UFC losses, Aubin-Mercier made his PFL debut and is undefeated under the promotional banner. Having gone to decision in every fight thus far, the Canadian will be looking to finish things in New York. Martinez has also never finished a bout under the PFL banner but with that being said, he’s enjoying a two-fight winning run. These wins have come over Stevie Ray and Clay Collard so expect him to be well prepared heading into this one. 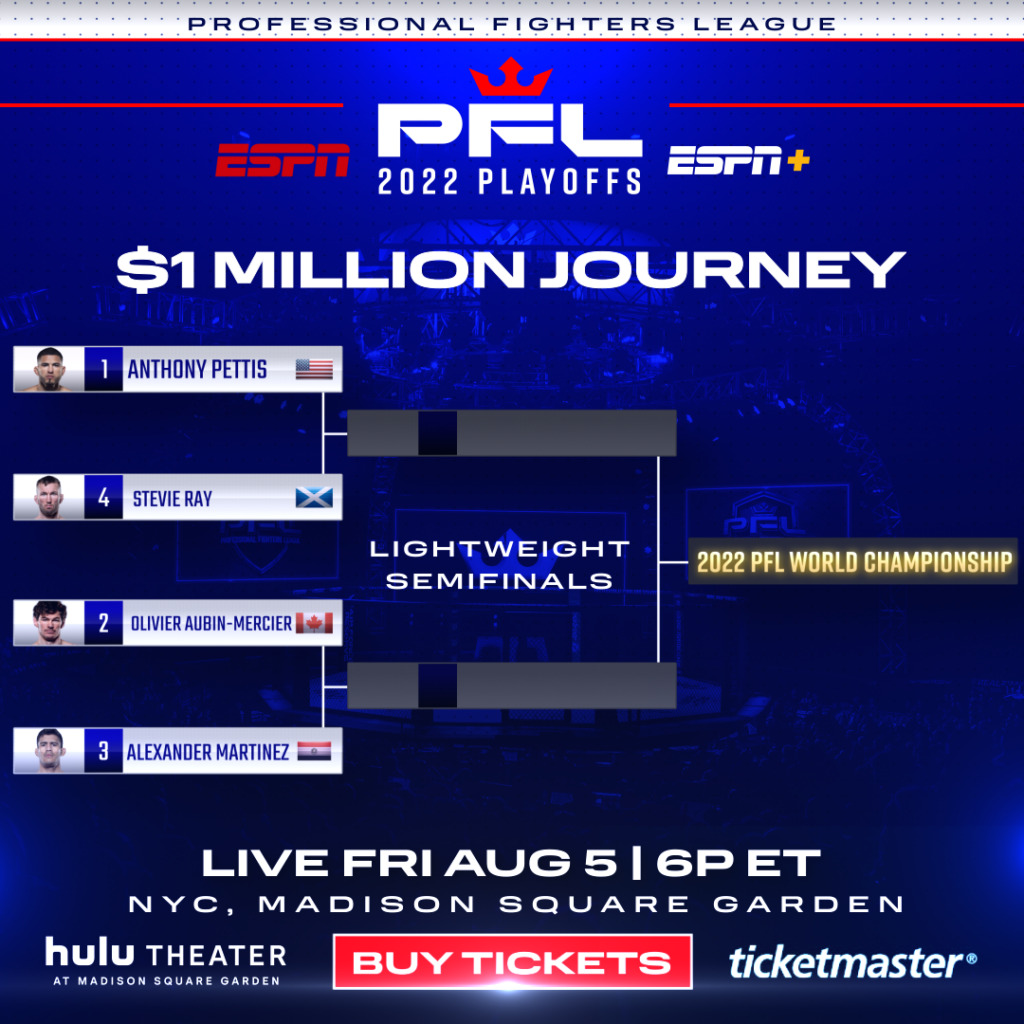 Elsewhere on the PFL 7 card will be the light heavyweight semi-finals. In the co-main event, Omari Akhmedov was scheduled to face Antonio Carlos Junior, the winner of last year’s tournament. Unfortunately, Carlos Junior had to withdraw and was replaced by #5 seed, Josh Silveira. Akhmedov is a veteran of 31 fights, where he competed 15 times for the UFC. Since moving over to the PFL, he’s gone 2-1 but has finished his last two bouts, most recently in June.

Silveira is undefeated at 9-0 and most recently finished Marthin Hamlet. He’s only once gone to decision, meaning he’s all action. Interestingly, despite his inexperience in comparison to his opponent, the American enters the bout as the favourite.

The other fight in the bracket features another UFC veteran as Rob Wilkinson takes on Delan Monte. The Australian, Wilkinson holds a 15-2 record and hasn’t lost since 2018 when he fought the current UFC middleweight champion, Israel Adesanya. He’s won his last four bouts, all by finish including two this year. To say that he’s enjoying a good run of form is an understatement.

Monte on the other hand lost in April this year to Carlos Junior in just 29 seconds. He did bounce back against former PFL champion, Emiliano Sordi, finishing him via knockout in the first round, however. The Brazillian has never gone to a decision and with Wilkinson finishing all of his recent fights, don’t expect this one to go the full 15 minutes. 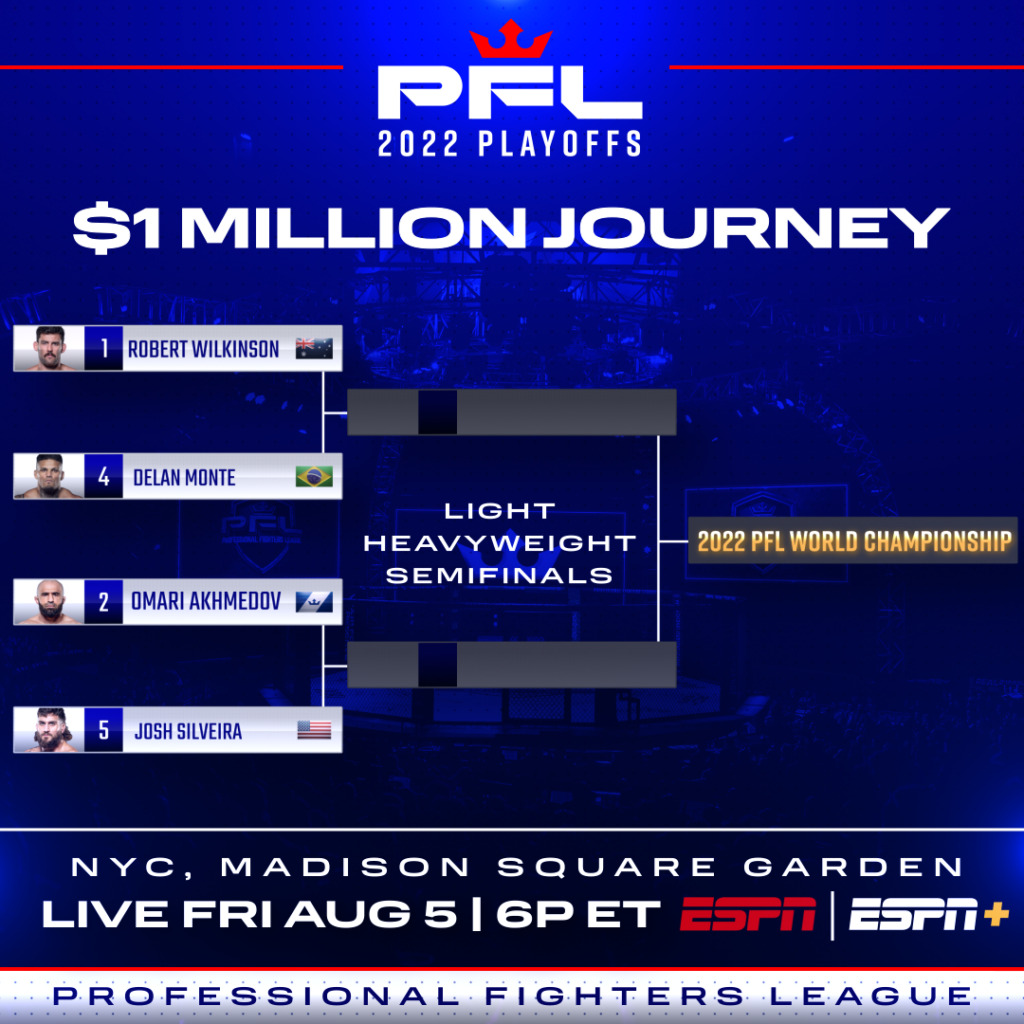