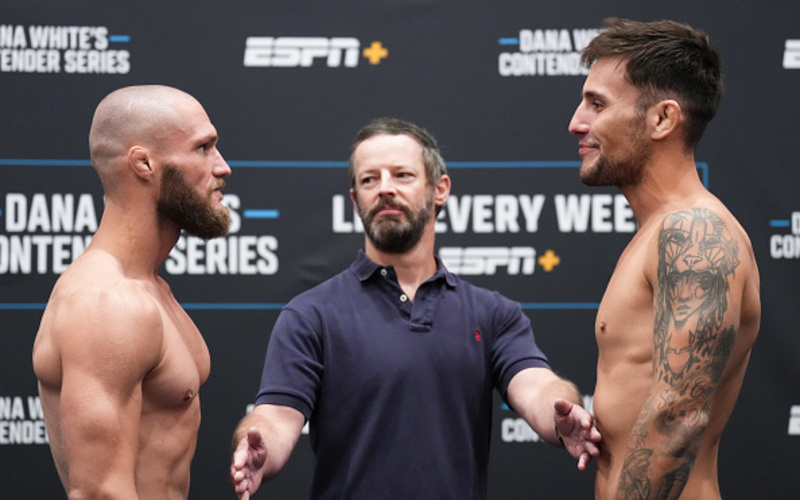 Nine contracts have been signed this season, with many more to go. Dana White’s Contender Series enters its fourth week in the 2022 season, and this week is a good one. Ten fighters vie for UFC contracts in front of the boss and matchmakers tonight at the UFC Apex, hoping to not only win, but exhibit the intangible qualities to make one successful in the UFC. Stay tuned right here for live Dana White’s Contender Series 50 results, as well as the UFC contract winners.

Names to Watch on Week Four of DWCS

In perhaps the most talent-rich week this year, week four of Contender Series 2022 features multiple champions of regional promotions. For example, the c0-main event is a Latin American super fight of sorts as Future FC middleweight champion Claudio Ribiero of Brazil fights Lux Fight League champion Ivan Valenzuela of Mexico. Both fighters have fought exclusively in their home countries, meeting in Las Vegas in the biggest fight of their careers.

Undefeated Cage Warriors bantamweight Jack Cartwright (10-0) takes his long-awaited next step in his career, fighting Fury FC vet Jose Johnson (14-7), who will try to make good on his second attempt in front of the UFC brass. Cartwright has finished all but one opponent and trains out of SBG Manchester. The unassuming Brit got into it with Johnson yesterday at the weigh-ins, sparking a feud that made its way to the hotel lobby.

In the main event, Esteban Ribovics (10-0) battles Thomas Paull (11-3). Esteban Ribovics has reached the top of the mountain in his home country of Argentina already, claiming the Samurai Fight House and Fusion FC lightweight titles. “El Gringo” Ribovics has never been to a decision and knocked out each of his last opponents in less than thirty seconds.

Against Thomas Paull, he fights a Brit who has stayed relative out of the spotlight of larger promotions. He last took out Perry Andre Goodwin, who challenged for the Cage Warriors featherweight belt a few fights ago, in just over a minute. Beyond that, this fight will be a bit of a coming-out party for Paull should he succeed.

Also on the card is bantamweight LFA and Invicta FC standout “All Hail” Hailey Cowan (6-2), who takes on Brazilian bruiser Claudia Leite (7-2).