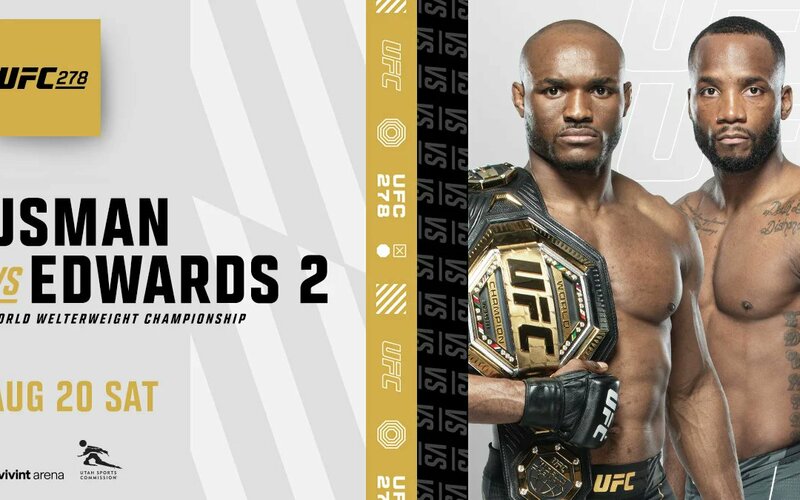 Birmingham’s own, Leon Edwards will finally get his shot at UFC gold in a rematch with the long-time champion and P4P king, Kamaru Usman. Riding a 10-fight unbeaten run, Edwards has been calling for a title shot for a number of years and at UFC 278 he’ll finally get the chance. The last man to beat Edwards? Kamaru Usman. The two met back in 2015 with Usman picking up the unanimous decision victory.

Edwards and Usman will rematch in the UFC 278 main event but further down the card, Jose Aldo will take on Merab Dvalishvili in a pivotal bantamweight clash. Luke Rockhold will finally take on Paulo Costa in his first fight since 2019. Alexandr Romanov will take a step up in competition as he takes on Marcin Tybura.

We take a look at how Leon Edwards can overcome the odds and finally lift the welterweight belt.

There isn't a whole lot of hype around #UFC277, will #UFC278 bring more heat? pic.twitter.com/2YiP0AGHmK

How does Leon Edwards win at UFC 278?

Throw Kicks up the Middle

We know just how far Kamaru Usman’s striking has come on since linking up with Trevor Wittman. With that being said, ‘Rocky’ still holds the advantage on the feet.  Despite the stats showing that Usman is the more accurate striker and the more active man on the feet, striking doesn’t come as naturally to him as it does to Edwards. In their first bout, Usman attempted 13 takedowns and landed six. We have reason to believe that he’ll look to follow that same strategy again in Salt Lake City because there is a good chance that he’ll be outstruck by the Brit.

To combat the wrestling game of Usman, Edwards should be throwing kicks up the middle, whether they be high kicks or teep kicks to the body. The teep kick is notorious for being a difficult kick to catch for a wrestler as well as being an effective weapon for the attacker to look to maintain distance between themselves and their opponent. We saw it effectively when Conor McGregor faced Chad Mendes as the Irishman was able to keep Mendes at distance.

If Edwards can keep the distance where he wants it, his chances at victory increase massively. Jorge Masvidal during both of his bouts with the champion often threw kicks up the middle, although he threw the kicks with a roundhouse start. This left him susceptible to being caught and taken down. We saw when Edwards and Usman first faced off in 2015 that Edwards threw the kick up the middle which got a big reaction out of the future champion at the time.

Edwards also isn’t concerned about switching stance and against Rafael dos Anjos, we saw him switch stance and still throw the front kick up the middle.

This tactic would also combat something we saw the champion do a lot against Colby Covington in his last outing. Usman would constantly dummy the takedown, not commit to it but force his opponent to either begin to sprawl or allow Usman to make a read on his reaction. If Edwards can threaten the kick up the middle, it may prevent Usman from faking the shot and encourage him to stay standing in front of ‘Rocky’, making the Brit’s job more straight forwards.

Attack off the Clinch

As we all know, Usman is a wrestler. He’s landed at least one takedown in 11 of his 15 fights, with an accuracy of 49%. He doesn’t land a lot of takedowns in open space, rather he prefers to clinch his opponents and then take them down.

Edwards has a takedown defence of 70% and favours forcing his opponent into the clinch, rather than sprawling out from the takedown and then looking to reset. The Englishman is extremely comfortable in the clinch but more importantly, he’s dangerous on the break of the clinch. We saw when Edwards faced Gunnar Nelson in London that he was able to drop the Icelander with a brutal elbow off the break of the clinch. Prior to this, the Brit was able to constantly land on Nelson from the clinch, something that they had clearly worked on prior to the bout.

If Edwards is also able to throw knees off the clinch break and whilst fighting in the clinch, it will likely deter Usman from re-engaging for a takedown shot if he fears the knee up the middle.

We also saw Edward brutalise RDA from the clinch when the two faced in their main event. He split him open, constantly looked to land elbows from clinch breaks and punish the Brazillian whenever he got too close and into Rocky’s muay thai range.

Not only that but there is plenty of evidence that Usman doesn’t always cover up when breaking from the clinch. When facing Covington in their second bout, Usman often ducked out of the clinch without covering up. This is also something that we saw against Masvidal in their first fight. Both Covington and Masvidal attacked off the clinch and had reasonable success. This was especially evident against Masivdal as Usman has a habit of throwing a looping overhand right off the clinch. If Edwards can time Usman’s habit early, he can make him pay. Below are just two examples of Usman’s habit of looping shots from the clinch break, the first against Tyron Woodley when he won the belt and the second when he faced Masvidal.

Use lateral movement to not get stuck on the fence

The theme of this analysis piece has centred around Usman looking to ground Edwards and work the takedown from open space or from the clinch. What’s the best way for Edwards to avoid the takedown or the defensive clinch? Rather than having to adapt to Usman’s game, he can attempt to totally avoid getting trapped by the champion and not allow himself to get carrell against the fence line.

We know Usman is effective in the clinch, especially up against the cage, just ask Jorge Masvidal. Masvidal was pressed up against the cage for the majority of their fisrt bout and really struggled to get off the fence. Usman is ranked seventh all-time for control time in the UFC, clocking up 1:58:12, suggesting that he does a good job once he puts his opponents in a position that he wants them, he keeps them there.

If Edwards can utilise his lateral movement, he can keep the fight in the middle of the Octagon and not allow Usman to dominate against the cage in the clinch. The ‘old’ Usman has been known to stall fights, not look for the finish and not do a lot on his way to victory when he could put his foot down. His performances against Emil Meek, Demian Maia and the first Jorge Masvidal fight come to mind.

If Edwards allows Usman to stall the beginning of the fight, he could find himself chasing the finish, leaving himself open for a potential knockout. We saw when Edwards faced Gunnar Nelson that he used a lot of lateral movement in order to not get stuck against the fence and therefore make defending the takedown easier.

We can see below how Leon Edwards feels pressed up against the cage when facing Nelson in London. He chooses to move fake a straight which gets Nelson to take a half-step backwards, he then fakes going to his left, before switching it and circling put to the right. Not only did this allow him to reset, get back into open space and fight on his terms, but it also worked in his favour by circling away from Nelson’s power hand.

We know what Nelson’s game is, to take the fight to the ground and look to work his ground game. If we’re correct in our predictions, Usman will also look to do this, so using the Nelson fight as an example, we can show more evidence of Edwards using his lateral movement to avoid potential danger.