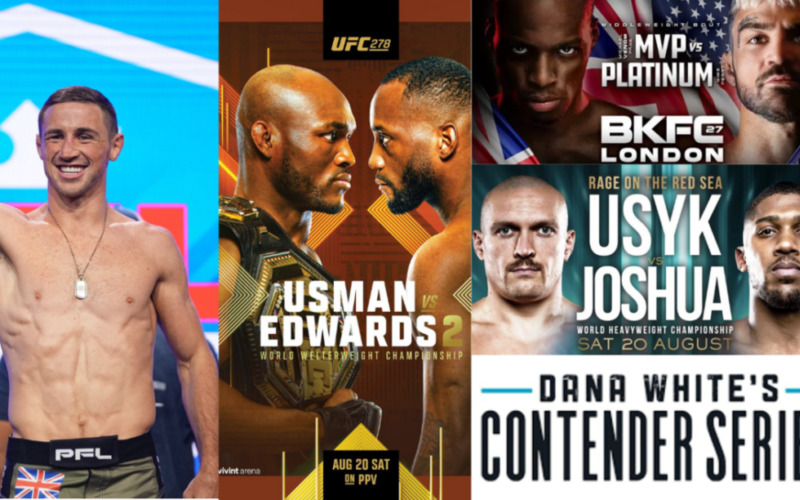 This week marks a huge week for British combat sports. Starting with two British fighters competing on Dana White’s Contender Series, followed by Anthony Joshua making the walk for his rematch against Oleksandr Usyk, Leon Edwards finally getting a shot at welterweight goal at UFC 278, PFL 9 taking place from London with plenty of British talent featuring as well as Michael Venom Page making his BKFC debut, there is plenty to keep an eye on all week.

We give you a brief preview of all the British fighters in action this weekend.

The Contender Series kicks off with two British fighters on deck. Jack Cartwright features against American, Jose Johnson. Cartwright is the former CageWarriors bantamweight champion and holds an impressive 10-0 record, finishing eight of these wins. He’s headlined a number of CageWarriors cards, so we can’t expect the moment to get to him. He’s gone five rounds once and has been scheduled for five rounds in his last three outings, so expect him to keep a high pace throughout. The odds have his fight against Johnson near even, arguably because Johnson has far more experience. He holds a 14-7 record and has already had a shot on the contender series in 2020. Last time out he finished TUF alumni, Dulani Perry in just 12 seconds.

Thomas Paull & Jack Cartwright go to work tonight on Contender Series as they hope to earn the biggest wins of their careers and earn a UFC contract! 🖊#VMTV #UFC #MMA #UKMMA pic.twitter.com/I3fiFtF4o6

Thomas Paull is heading this week’s contender series as he takes on Argentinian, Esteban Ribovics. With a record of 11-3, Paull is a savage finisher with all of his 11 wins coming via KO/TKO, most recently in March of this year on a regional show where he ended things in a little over a minute. With that being said, only three of his opponents have had winning records. Ribovics is 10-0 with all 10 of his wins coming via finish, five via submission and five via TKO/KO. What we can say is, don’t expect the judges to be needed in this one.

Heading over to the world of boxing, we have the biggest star in British boxing in years, Anthony Joshua returns in an attempt to get his belts back as he rematches Oleksandr Usyk. Last time out, we saw Usyk outbox Joshua over 12 rounds, almost finishing him in the final round to capture three of the big four belts, with the WBC belt being the only one not in his grasp.

This time the two will clash again in Jeddah, Saudi Arabia in a highly anticipated rematch. Joshua has a new trainer in Robert Garcia, dropping Robert McCracken in favour of a more experienced trainer. This is a huge fight for British boxing. If Joshua can pull off the upset, he could potentially lure Tyson Fury out of retirement for the biggest fight in boxing history.

Check out our in-depth breakdown of Joshua vs. Usyk 2 on our bonus podcast this week:

Third Time Lucky for Brits in the UFC Welterweight Division

Leon Edwards will look to make it third time lucky when he faces Kamaru Usman in the main event of UFC 279. Twice before British fighters have attempted to capture the welterweight belt but come up short. Firstly, Dan Hardy was dominated by Georges St Pierre all the way back at UFC 111 in 2010 and more recently, Tyron Woodley put a stop to Darren Till‘s rise when he submitted him at UFC 228.

Having faced off before in 2015 with Usman getting his hand raised, both men have made huge improvements since their first meeting. Edwards is undefeated since that fight as is Usman, however, Usman has not only captured the 170lbs title but has five title defences on top of that. Edwards has put a string of 10 fights without a loss.

Can Edwards make the appropriate adjustments in order to end the impressive winning run of ‘The Nigerian Nightmare’? Or will the dominant champion continue his reign?

We broke down the UFC 279 in great depth on this week’s podcast, which can be found here:

The co-main event of PFL 9 sees one of the best British fighters active today when Brendan Loughnane takes on UFC vet, Chris Wade. Loughnane came up short in last year’s semi-final to the eventual winner, Movlid Khaybulaev. Since then, Manchester’s Loughnane has had a strange few fights. When he faced Ryoji Kudo the fight was called off after an accidental clash of heads. It was Kudo’s head that was split open and the fight was waved off in the third round with two minutes remaining. Despite being dropped, Loughnane got the nod via technical decision.

Next, Loughnane suffered bad swelling around his eye and had to change up his game and became very wrestling-heavy against Ago Huskic. Huskic himself was a late replacement after Loughnane’s original opponent, Boston Salmon had to withdraw with injury.

Wade and Loughnane have bad blood between them, which promises to make for an interesting match-up in this year’s semi-final. There’s no doubt that Loughnane will have the might of the crowd behind him.

Elsewhere, one of the hottest prospects in UK MMA, Dakota Ditcheva makes her PFL debut, Simeon Powell returns and looks to go 3-0 in the PFL. Stuart Austin looks to snap a two-fight losing skid and pick up his first PFL victory and Tayo Odunjo and Abraham Bably also feature.

Also live from London is BKFC 27, where former two-time Bellator title challenger, Michael Page will be making his bare knuckle debut. Holding a MMA record of 20-2, Page has captivated fans with his in and out style, karate skills and exciting fighting nature. With that being said, he often utilises kicks in his game, which we know he won’t be able to do against his opponent this weekend, Mike Perry. How will his fighting style transfer over to bare knuckle? We’ll have to wait and see.

Page holds a professional boxing record of 2-0, both coming via knockout, whereas Perry is 1-0 in BKFC, picking up his first win in February against Julian Lane.

Elsewhere on the card, Brits Terry Brazier, who is a Bellator veteran and former UFC fighter and CageWarriors champion, Chris Fishgold feature.