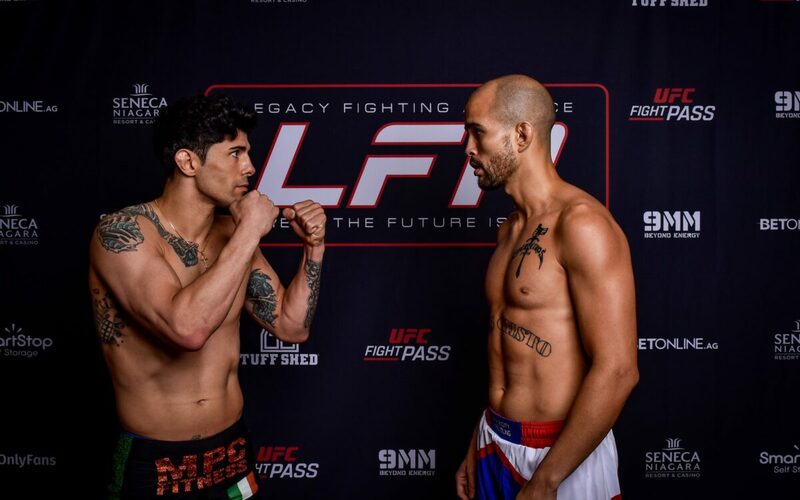 After a successful debut in Niagra Falls, New York in February, Legacy Fighting Alliance returns to the Empire State for LFA 139. No doubt the event will see plenty of Canadian MMA fans make the short drive across country lines as four native Canadians will compete on the card. Stay tuned right here for live LFA 139 results.

Now that the #LFA139 weigh-in is in the books, which fight are you looking forward to most?

Canadian MMA fans likely already know the name Adam Assenza, one hand of the LFA 139 main event. Assenza (16-6) has competed almost entirely in Canada for his pro career, mostly for Ontario’s BTC promotion. Although he may only have a few good years left in his MMA career, he is sitting on a six-fight win streak. Fighting in the LFA 139 main event represents the kind of breakthrough he has likely been looking for in his MMA career and is a big deal for Canadian MMA.

Standing in Assenza’s way of giving the local crowd a win is Brazilian BJJ ace Junior Melo of the Pitbull Brothers team. Unlike Assenza, Melo (11-5) has fought much more internationally and also once for LFA already. He fought fan favorite Tommy Aaron and put him away within ninety seconds.

A win for Melo has much more significant implications for his career progression, and a win over Assenza would be his most meaningful win to date.

The evening’s co-main event features Teshay Gouthro fighting Arnold Jimenez. Gouthro (5-1) trains out of Niagara Top Team down the road in Canada and faces his toughest test to date in Jimenez (8-2) of California. Like Assenza, Gouthro will have the local fans at his back against Jimenez. Arnold Jimenez recently became the first to hand Josh Wang-Kim his first pro loss, albeit via disqualification. The win extended his win streak to six, and rare to see a fighter on the regional scene have a lengthy win streak that doesn’t get noticed by the big leagues.

Also on the card is Elevation Fight Team’s Ryan Charlebois (3-1), who would be undefeated if not for a disqualification loss in his last fight. He faces Contender Series alum Logan Urban (5-1), who had his DWCS loss to Josh Quinlan changed to a No Contest due to Quinlan testing positive for a banned substance post-fight.

Junior Melo def. Adam Assenza via TKO (Ground and Pound) at :59 of round 3

Liam Anderson def. Robert Gidron via TKO (Ground and Pound) at 4:48 of round 1

Luke Roberts def. Derrick Patterson via Submission in round 1

Amateur: Alex Moher def. Kevin Hixon via Submission in round 2