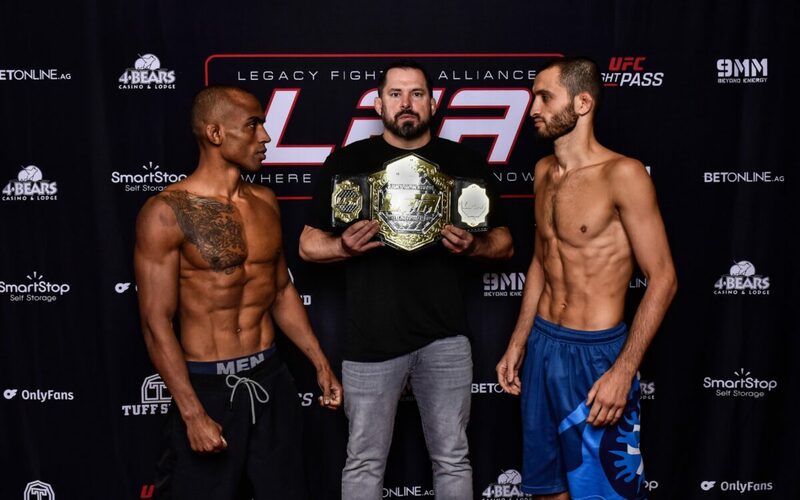 A vacant championship will be up for grabs when the Legacy Fighting Alliance returns for LFA 140 on Friday night at the 4 Bears Casino & Lodge in New Town, North Dakota. Flyweights Carlos Mota and Rizvan Abuev are set to compete for the vacant flyweight title and potentially assert themselves as top regional flyweights to keep an eye on.

Friday’s main event will pen another chapter in the budding MMA rivalry between Brazil and Russia when Mota faces Abuev with LFA gold up for grabs. “Tizil” Mota is coming off a victory that despite being schedule for five rounds ended in 98 seconds. He knocked out Steven Merrill with a body kick and follow-up to win the RMF title in North Iowa Fights, providing him with his third career inside-the-distance win and second as a result of a body kick. Mota has also competed in a five-round bout once under the LFA banner, coming up short against Charles Johnson in his first shot at the flyweight title. Though he made it to the fifth round, he would fall to Johnson 45 seconds into the round. With Johnson having moved on to the UFC, Mota will look to be the next LFA flyweight to get the call.

Abuev, who fights out of St. Petersburg, Russia, brings forth a style of fighting commonly associated with Russians: Combat Sambo. The 30-year-old fuses his strong grappling with a striking style based on Wushu Sanda, with Sanda being a version of Chinese kickboxing commonly associated with Kung Fu. His versatile, dynamic style shows in his body of work, as 11 of his 12 victories have come by way of finish, often closing the show with a submission, or more often, brutal ground and pound. Though he lacks the five-round experience Mota possesses, Abuev makes up for it with killer instinct. Given this, along with Mota’s probable want to finish the fight early, the full 25 minutes will likely not be necessary. One factor working in the favor of Mota: two of Abuev’s three career losses have come in the first round, one of which came at the literal hands of recent UFC victor Tyson Nam.

The main event of LFA 140 could come down to whether or not — and how quickly Abuev is able to get Mota to the ground and wear on him. A standup fight could favor Mota, who trains out of Pr1mera Gym in Rio de Janeiro, Brazil and has shown incredibly solid Muay Thai in eight professional fights. If Abuev is able to ground the Brazilian, however, he’ll have a chance to join newly-minted Eagle FC flyweight champion Irgit Oveenchi as recent Russian fighters to win titles at 125 pounds.

Current odds see Mota as a -200 favorite on most sportsbooks, while Abuev can be had at an underdog price tag of +160.

The second fight from the top will feature rising welterweights Ryan Leininger and China’s Bahatebole Batebolati. The midwesterner Leininger is huge for the weight class at 6-foot-3 and has shown an ability to wear on his opponents in both striking and grappling exchanges. The Premier Combat Center product has reeled off four straight wins after falling on the deadly knee of current UFC fighter Joseph Holmes. Versatility is his calling card as each of he has won fights on the ground and on the feet with both his hands and legs. One such fight in Dynasty Combat Sports saw his opponent to submit to leg kicks, though it is tough to envision his opponents Bahatebole following suit.

China Top Team’s Bahatebole fits the mold of recent Chinese fighters to come along who are not afraid to bite down on their mouthpiece and swing. Bahatebole, to his credit, owns three knockout wins and a corner stoppage, though on Friday he’ll be looking to avenge the first loss of his career, his LFA debut no less. He dropped a unanimous decision to unbeaten Haris Talundžić, a Factory X Muay Thai fighter. So long as he is able to keep the fight standing against Leininger, he will stand a good chance to right the ship, though the American could have a big advantage if he is able to take Bahatebole the ground or even knock him down and grab a limb or the neck.

Most sportsbooks currently see Leininger as a -145 favorite, while bettors can take Bahatebole at around a +125 price tag. It is also worth noting that Bahatebole missed weight for this fight by 0.6 pounds and will forfeit a percentage of his purse to Leininger regardless of the fight’s outcome. The original co-main event would have seen Mairon Santos taking on Dwight Joseph at 145 pounds, but a miss from Santos scrapped the bout altogether.

Santa Ana, Calif.’s Richard Miranda will put his 4-0 unbeaten record on the line against 4-4 Elijah Harris. Miranda has quickly developed a reputation for himself as a finisher, with all four of his wins coming inside the distance. Meanwhile, Harris has been finished in three of his four losses. Additionally, Ray Waters (2-0) is set to take on Leivon Lewis (3-1) in a welterweight scrap on the main card. Lewis actually came in three pounds under weight and will give up an additional two inches of height to Waters, a native of Scottsdale, Ariz. A flyweight fight between Aupuni Pagaoa and Dillion Cox will round out the main card, a beneficiary of the Santos vs. Joseph cancellation.

Additionally, Friday’s LFA 140 will feature a pair of preliminary fights with Jon Knutson set to take on Wes Schultz at 185 pounds and Carlos Trinidad slated to meet D’Ante Arnett at a 165-pound catchweight.

Carlos Mota def. Rizvan Abuev via Knockout (Left Hook) at 3:14 of Round 1

Richie Miranda def. Elijah Harris via TKO (punches) at 4:34 of Round 2

Wes Schultz def. Jon Knutson via Submission (RNC) at :53 of Round 2

Carlos Trinidad def. D’Ante Arnett via Knockout (Left Hook) at 3:53 of Round 1